Dragon Quest VIII on 3DS finds itself at a unique disadvantage compared to its predecessors. At least, it does if you're a European gamer.

Unlike in the US and Japan, the original PS2 version was the first taste we ever got of Square Enix's sprawling JRPG franchise. This means that unlike last year's Dragon Quest VII: Fragments of the Forgotten Past, Dragon Quest VIII comes with certain expectations. It's got baggage.

Fortunately, the game is well up to the task of carrying such baggage. In fact it slings that baggage into a magical pot and crafts it into something deeply familiar, but with a zest and spirit that's all too uncommon.

There might be some extra rose-tinted nostalgia surrounding Dragon Quest VIII, but I can't imagine it needed too much tweaking. The original PS2 game is arguably the first game in the series that remains fit for modern consumption as it is.

It was the first Dragon Quest to feature a full 3D world, while its bold cel-shaded graphics have a timeless quality to them that translates well to the 3DS's top screen. Yes, the game has been optimised and tidied up for the new platform (though there's no 3D effect here), but this is no dramatic overhaul. These are much the same lush meadows, rolling hills and deep-blue rivers that I remember traipsing through a dozen years ago. 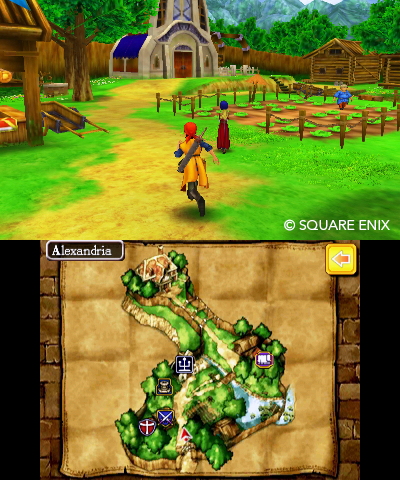 That's not to say that the visuals are flawless. There's a distracting level of pop-up when strolling through the overworld, while textures and lighting effects seem extremely basic.

But there's life and personality in this world, and Level 5's pristine art style will quickly win you over.

Tale as old as time

Despite Dragon Quest VIII's adventurous (for its time) engine, this remains at its heart a classic JRPG cut from 16-bit cloth.

Your posse of assorted cast-offs moves from village to village, chatting to locals and running fetch quests. In the open fields and dungeons in between you'll encounter regular turn-based battles with small groups of outlandish enemies. You've done all this a hundred times before. 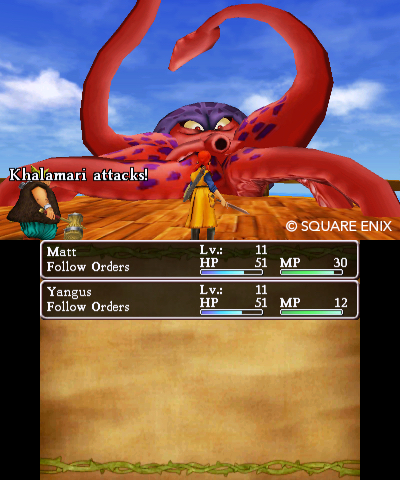 Well, most of it. There have been some all-new side quests and fresh story content added, as well as two new characters and a new photo-taking game. But none of these additions fundamentally change the fabric of the game.

It's in the execution of its familiar components that the game really succeeds, though. Those groups of enemies may be fodder for your team, a way to slowly bump up their numbers, but each is lovingly drawn with its own groan-worthy pun of a name and distinctive behaviour. Some of them wouldn't be out of place in a Pokemon game.

There's also a joyous, primary-hued bounce to Dragon Quest VIII's story. Even the big bad - a rampaging homicidal mage - has a sense of the pantomime villain about him.

This sense of fun is helped no end by the presence of a full voice cast supplying vocals to all of the major story scenes. There's the odd duff line or questionable character decision, but generally it's brilliant stuff, from the grizzled cockney thief Yangus to the histrionics of the titular cursed king Trode. It's all in here from the original, packed away in that tiny 3DS game card.

It's a good job Dragon Quest VIII's world still impresses, really, because there are a couple of areas that grate. The game's traditional JRPG trappings lead to some familiar levels of grind and repetition. Those enemies might look great, but it still grows wearisome fighting successive groups of the same stooges. The game's turn-based combat system isn't particularly nuanced or interesting, either.

You can avoid those enemies if you wish, but that's generally a bad idea. Make no mistake, Dragon Quest VIII can be unforgiving, and if you head into a dungeon without being prepared you can easily be wiped out well before you reach the resident boss monster.

Dragon Quest VIII is a curious blend of old and new. It's a faithful conversion of one of the most progressive entries in the series, and it still plays brilliantly. But its core mechanics are as old as the hills, and the fault lines of the JRPG genre are in plain view for all to see.

Where Dragon Quest VIII really succeeds is where it's always being strongest. It throws you into a magical, enchanting world filled with humorous and likeable characters that you actually want to spend more time with.

It's both impressive and a little sad how unique and forward-thinking that concept still seems.

Dragon Quest VIII is a game that's one big nostalgic nod to the past, for better and for worse. Despite this, its vibrant world and memorable characters will pull you through to journey's end
By Jon Mundy
| Jan 18, 2017 |
3DS
Find out more about Dragon Quest VIII: Journey of the Cursed King

Rumour: Dragon Quest VII and VIII on 3DS might actually be heading west after all