How angry can birds be?!

This week the Army got to grips with Angry Birds Blast, a match-three balloon-popping extravaganza. Pop balloons, get points, rescue birds - it's as simple as that

Grab a copy from the App Store/Google Play now.

This game is a lot of fun. It reminds me of traditional match-threes but the balloons go up instead of down. The first few levels set the pace very well which allows you to get you into the flow of things fast.

There are plenty of levels to keep you entertained for a long while and it doesn't need too much brain power. Overall, a decent game to play whilst half-watching TV or doing something else.

As far as gameplay goes there really isn't anything new here: the game mechanics are taken straight out of Pet Rescue Saga where you have to free birds from balloons.

However, this is by no means a bad game. No, it doesn't offer anything new but it's a match-three that has been done well. The boosters are clever and funny, blasting pigs is still satisfying and there's enough to keep you coming back for more.

I managed to get to level seven before I got bored. I have played several games like this in the past and find that it's pretty hard to get into seeing as gameplay is just matching up three balloons.

Even though this game has tasks and collectibles, pull the sweets out of Candy Crush and throw in an array of pigs and birds and what are you left with? 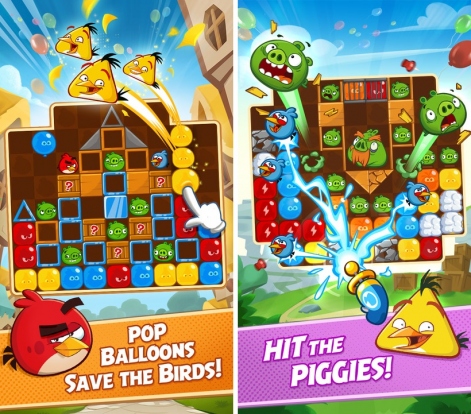 The gameplay is identical to many other games in this genre and I only managed to play a few levels before getting bored.

But there is no denying it's well-made, the graphics are fantastic, and the explosions link in well with vibrations. A game put together well, just not for me.

Kids and fans of the Angry Birds franchise will definitely enjoy this, and if you're a fan of match-three games you will like this too.

But I got tired of this game, there's nothing about it that makes me want to sit down and play. It's repetitive and has not brought anything new to the genre.

The graphics are great and gameplay is fun, but it's another match-three game and there is no shortage in this genre. I will play again while other games I play recharge, otherwise I have no reason to come back.

Basically, if you are a massive Angry Birds fan then this is the match-three for you. For others who are bored with this genre of game then I suggest looking for something else.

This was fun for the first 15 levels or so, but just like any other match-three it became tedious. Rovio should stick with catapulting birds at pigs.

The App Army is Pocket Gamer's very own community of mobile game experts. Each week, we provide them with a bunch of free codes and early access to the hottest upcoming games so they can provide their thoughts in features like this. To join, simply follow this link to the page on Facebook and request access. We'll get you in right away!

I Love Hue is an upcoming puzzler all about organising colours

[Update] Rescue your bird friends in Angry Birds Blast! out now on iOS and Android