6 new Hearthstone cards that could ruin the game

Hearthstone has always been a balancing act. You've got highly aggressive decks which aim to take down an opponent before they even get started, and control decks that try to wait it out and then play powerful card after powerful card to bring the enemy to their knees.

At their most extreme, neither archetype is much fun to play against, and up to this point, each style kept the other in check. But with the latest expansion, Mean Streets of Gadgetzan, the pendulum has swung heavily toward control. That means slower, potentially duller games.

The real killer, however, is that the set contains some control cards that seem to actively hurt enjoyment. They make games longer and feel almost designed to taunt or annoy. Here's six of the worst. 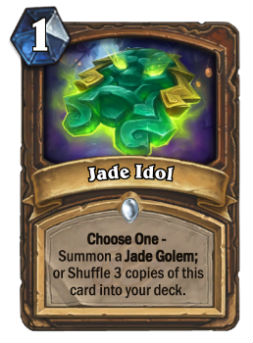 Prior to release, this was the card everyone was excited for. Each Jade Golem you summon gets more powerful so, in combination with other Jade cards, it quickly starts producing minions of terrifying proportions.

That's not the issue with this card though. The problem is the fact that it can ensure a Druid never runs out of cards.

Druids have a lot of potential for stalling. They can throw up massive Taunt minions which must be destroyed before the hero can be attacked.

They have access to healing spells, armour, and minion removal, so it's possible with Jade Idol to simply to try and stay alive and wait your opponent out. You'll never empty your deck but when he does he'll take ever increasing damage each turn.

We've yet to see just how effective this approach is. But, either way, it's no fun to play against. 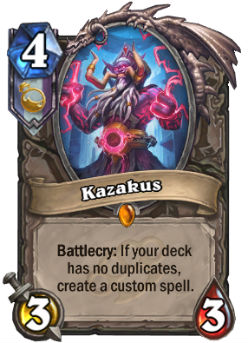 This ability looks confusing at first glance, but essentially it allows you to build a custom spell. You're given a series of three options for your brew, resulting in around 120 different possibilities. It's powerful because of its flexibility.

Whatever problem you're facing, chances are you can create a spell to solve it. Whether it's a big heal, massive face damage, or a board wipe, your brew will likely deliver.

At a stroke, you can change a losing game state into a winning one. No matter how hard your opponent has worked, Kazakus offers the chance to turn his efforts on their head.

Having no duplicates in your deck is a high price, but it actually makes things even more frustrating. It combos with other no-dupe cards like Reno Jackson, who offers a full heal, and the new Inkmaster Solia, who can then cast your newly created spell for nothing.

Nothing but annoyance awaits. 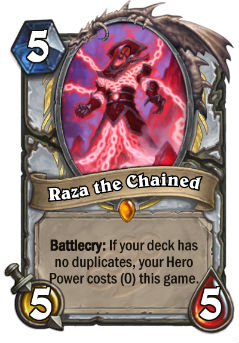 Raza is a Priest card and their ability is to heal two damage. A free two-point heal every turn is good, but it isn't a game changer.

What's so awful about this card is how well it combines with other cards. Like Kazakus, including Reno Jackson in a deck with this is a no-brainer. So it's not just a two point heal every turn but a total heal one turn as well.

Reno was bad enough by himself. His entire value is as a troll card, snatching the game away from your opponent when they're on the cusp of victory.

Raza makes it easier to survive until Reno gets played. Then there's Justicar Trueheart, who makes the Priest's power heal four damage rather than two.

Four heal, every turn, for free. You might as well just concede. 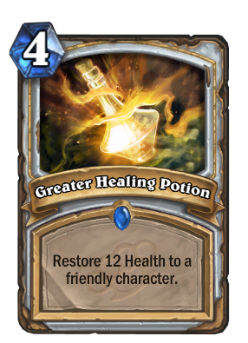 Let's keep stacking the frustrating factors this expansion has added for the Priest. Imagine facing the above cascade of endless heals and then slap this on top? Maybe with a Priest of the Feast for good measure, healing an extra four health? It'll be a wonder if games against Priests ever end.

Even without Raza and Reno, seeing this go down is going to cause nothing but misery and dismay. Especially because that means there's two of them in the deck. It's not expensive, so playing it gives you the chance to maintain board presence too.

It seems like a recipe for dragging out matches to pointless lengths. 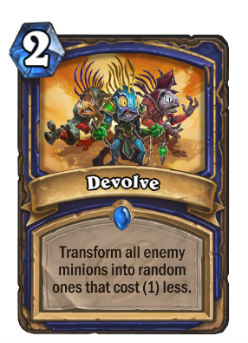 Most aggressive decks rely on cheap minions, which then get given various temporary or permanent buffs. Either that or they use under-costed cards which have a negative effect like damaging the player. Both types will be instantly ruined by this 2-cost card.

Again, the issue here isn't so much the power level - although this does seem awfully cheap. It's the way in which a single card has the potential to instantly ruin someone's game plan.

Hearthstone is best when players are constantly jostling for position and dominance. Not when a single card reverses the whole flow of play. 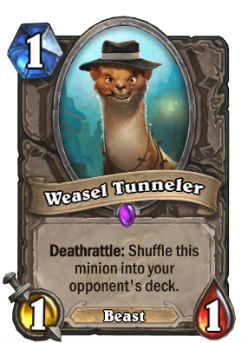 Aside from the fantastic card art, this isn't an especially powerful minion. But step back a minute and look at that power. Its purpose is for you to grab it in a mulligan and get yourself some early board presence.

Then, when it dies, it gets buried in your opponent's deck, diluting its combos. So at the very moment they're hoping to draw a game-ending legendary, instead they get... a weasel.

In short the entire purpose of the card is to frustrate and annoy. It has no other value. It exists only to cause misery and make people sad. Which, it feels, is a major thrust of this entire expansion.