Ever wished you could travel the globe in a van, cooking up a variety of delicious dishes for your hungry customers? Well dream bigger, as you can now do exactly that on your mobile - except in space!

Yup, that's what Space Food Truck offers - the chance to stretch your culinary muscles across the galaxy as you work as part of a team to deliver delicious food to aliens.

It's cooperative as well. You and up to three other players can each take on different roles in the kitchen as you explore a vast, procedurally generated galaxy, collecting new recipes along the way.

It's a big game, so we enlisted the support of our stalwart group of gaming experts in the App Army to help you determine whether it's worth your time - and money.

Space Food Truck is a unique card game. Before you begin your culinary space adventure, you have the option of watching tutorial videos or reading articles. But let's get real, who does that?

I personally didn't watch the videos, as I thought there would be instructions in-game. I was wrong. 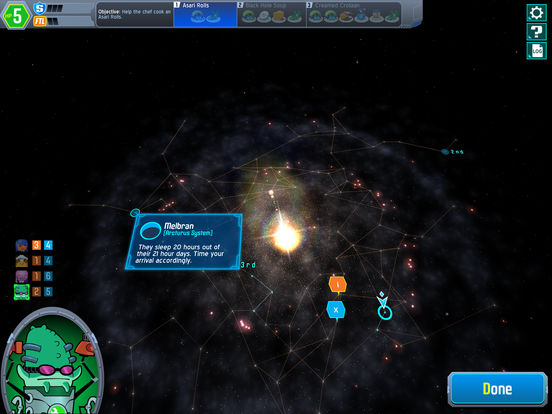 Tutorials or lack thereof aside, one gameplay function I found unique was the ability to trade cards with other players. For instance, if you have multiple players in the same room, you can exchange cards with one another to increase your chance of playing a card.

I love this game! I had trouble understanding it at first and didn't really know what to do. But I slowly learned from my failures, managed to make my first meal, and deliver an order.

It's a true pearl when you get to grips with it, and the fact that there's asynchronous multiplayer is absolutely fantastic. I can't stop playing it.

It's one of the most surprising and interesting strategy games I've ever played.

It's such a shame there's no proper tutorial, as watching a video then trying to put it into practice when you're in the game isn't as effective. It's a complicated game, and trying to figure out what you're doing as you go along is really tough.

I'm going to persevere though, as it looks like it could be worth the effort to understand what's going on.

If you like Diner Dash and card games, you'll absolutely love Space Food Truck as it does a great job of combining the two - though it does require patience.

The vast galaxy is colourful and fun to explore as you try to collect and cook all of the recipes. I like that the four characters have different skills - it's a bit like an RPG. After you learn to master those skills and your cards deck you will really enjoy this.

I really like the idea of traveling around space delivering food to aliens, but the fact that you have to watch videos rather than complete a tutorial ruins your initial experience.

As a result, it takes ages to learn everything that the game has to offer. It's a really deep experience.

I have mixed feelings towards Space Food Truck. I love the concept, artwork, and atmosphere but it's not very approachable. If the developer replaced the video tutorials with a campaign and cleaned up the mobile port this would be home run. However, right now it feels more like a double.

[Update] Play your cards right to cook something delicious in Space Food Truck, a co-operative deck builder, out now on iOS