Zombie Anarchy: Strategy, War & Survival - An appealing base builder in need of brains

Won't this zombie obsession ever die? Surely the whole thing needs a metaphorical bullet to the brain by now.

Zombie Anarchy: Strategy, War & Survival isn't that genre-killing bullet, of course, but neither is it a reason for hoping that the whole struggle is somehow worth it. It's a fairly basic day-to-day slog for survival that goes about its skull-cracking business with admitted flair.

Allow me to translate that zombie genre-speak for you: it's alright.

Our butch protagonist Kane is a former fireman (or he seems to be) who finds that his propensity for physical graft, axe-swinging, and mastery of firey substances translates well to the zombie apocalypse. He's like Rick Grimes on steroids, but a bit less grumpy.

Having established a base of operations out of little more than a winnebago and some wire mesh, the game tasks you with assembling a colourful band of survivors to help raid zombie and human encampments for supplies. These can then be applied to improving your HQ, and the cycle continues.

At first glance it might seem as if Gameloft has lifted the premise from The Walking Dead: No Man's Land, but while the casual base building and resource-harvesting elements are somewhat similar, the combat at its core is very different. 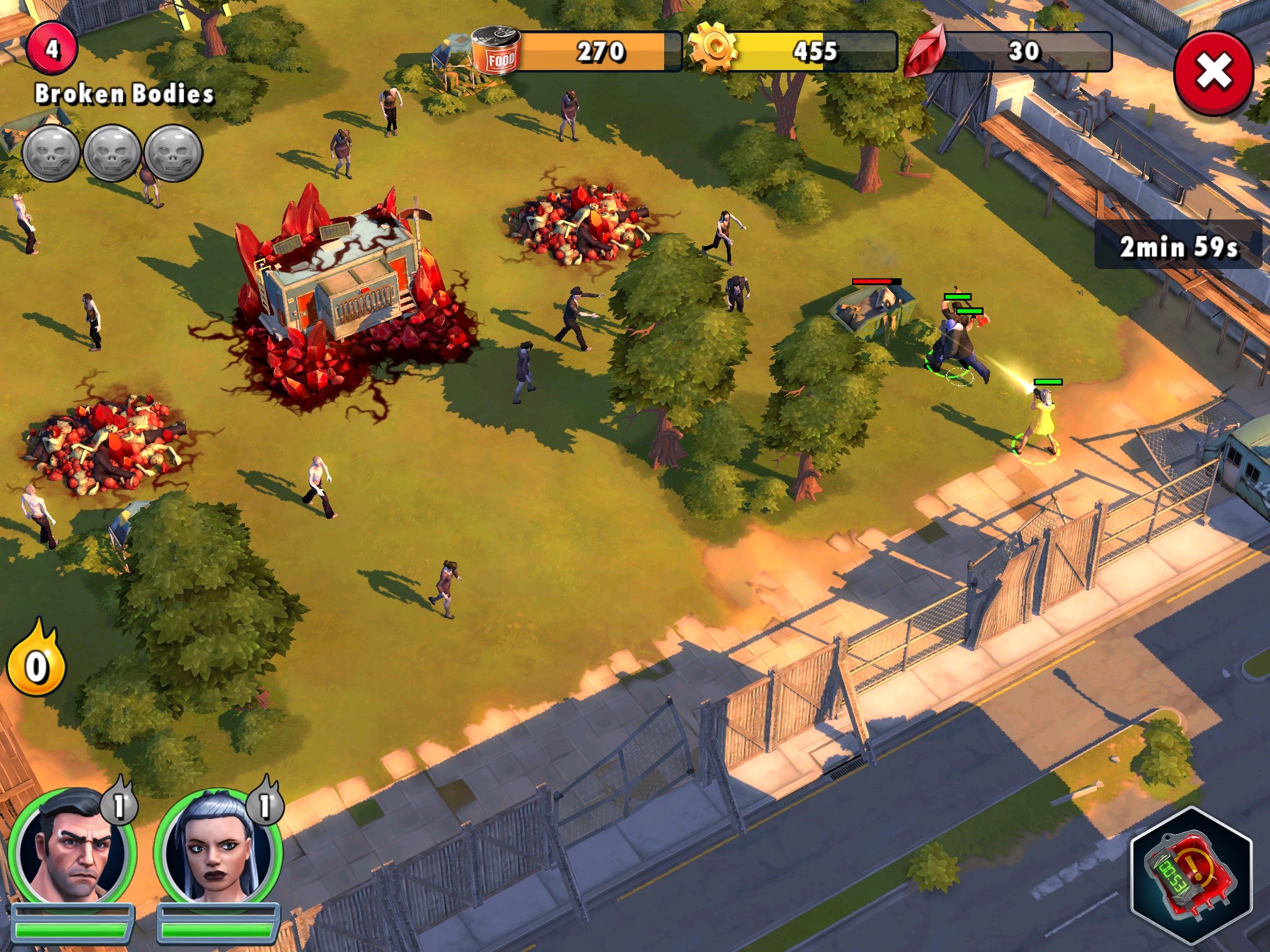 Rather than issuing turn-based strategic commands to your gang, here they simply set about smashing stuff up automatically on your behalf. This proves a lot less satisfying than No Man's Land's system, but there is some strategy to it.

For example, you can select targets for your gang to prioritise, such as a troublesome sniper tower rather than that harmless bus. You also get to select the odd special attack that becomes available to your team, such as Kane's area-of-effect molotov cocktail or plucky teen Nathalie's ability to go all trigger happy for a spell.

Ultimately, there's the feeling of a particularly light hack-and-slash RPG to these raid sections. Whether that sounds like an insult or a recommendation to you will probably determine how much you enjoy Zombie Anarchy: Strategy, War & Survival as a whole. 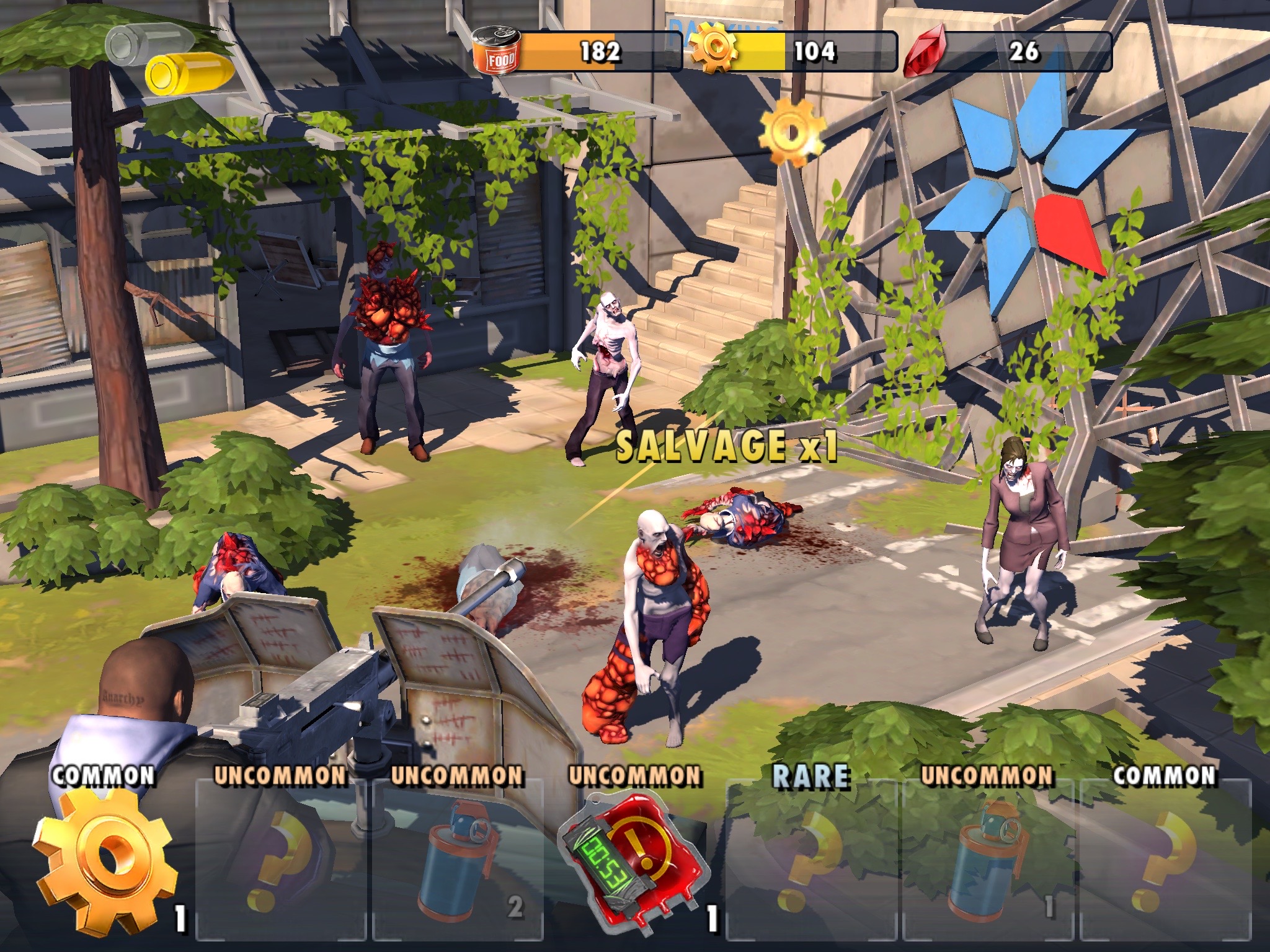 One thing I will say for Zombie Anarchy: Strategy, War & Survival is that it's a lot easier on the eye than The Walking Dead: No Man's Land and its bleak ilk.

There's a bright, primary-hued art style and lightness of touch that's more RAD Soldiers or Team Fortress 2 than dingy old The Walking Dead. It's much more pleasant to spend prolonged periods of time with the game as a result.

Not that Zombie Anarchy: Strategy, War & Survival is designed as such. This is a typical freemium experience, so pretty soon you'll need to wait for prolonged periods for upgrades to build or your team to heal up - unless you want to pay out. It works well as a dip-in, dip-out experience though - especially given that repetitive combat.

Overall, Zombie Anarchy: Strategy, War & Survival's lightness is both a curse and a blessing. It's both easy and moderately fun to nip in, have your team bash up a base, set up some base upgrades, and go off and do something more worthwhile while the game executes. But what you're actually doing here is pretty brainless.

How to make and use a Beacon in Minecraft Pocket Edition (MCPE 0.16)

Batman - The Telltale Series' third episode is dark, gritty, and shocking, and it's out now on iOS and Android

[Update] Gameloft's Zombie Anarchy soft-launches on iOS in the Philippines, the Netherlands, and Denmark