Android's yet to pull in

By Emily Sowden
| Oct 17, 2016
iOS
|
Mini Metro
Mini Metro is an underestimated title that packs a punch in terms of content and enjoyment, and lucky for you it's out now a day early on iOS. 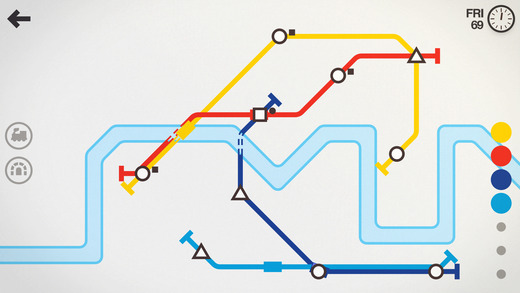 Originally released on Steam almost a year ago, the reception has been overwhelmingly positive with over 3,000 reviews and counting and over 250,000 copies sold since then. Mini Metro is a game about strategy. As the faceless overseer, it's your job to design the subway layout successfully so as not to disrupt journeys and cause chaos and delays.

It starts off nice and easy with just three station but you know things will get harder as the game goes on. Before you know it you've got an entourage of angry commuters, backing through frantically-opening stations as you cry in your corner wondering "why, oh why couldn't I have been a gymnast like Papa?"

I jest. Well, sort of. Your network will fail eventually, but how long can you keep it up for before your successes turn to utter, cringing failure?

Mini Metro is a BAFTA-nominated, IGF award-winning strategy game that needs to be played. Grab it here on the App Store for £3.99/$4.99 and God speed, pilgrim.