Spoiler: Not at all

Really Bad Chess as a name isn't really representative, because it's well, not bad at all - and that might confuse people.

What is should have been called is Really Wrong Chess, because that's pretty much exactly what this is. It's still chess, but you're given a random set of pieces each game. Maybe you'll have three queens and 10 knights, or a team made entirely of pawns. That can happen.

Oh, and how do we know it's not actually bad? Because we reviewed it, dummy. We gave it a Silver Award and called it: "A silly, irreverent take on chess that somehow manages to be an awful lot of fun".

We also asked for our stalwart collection of mobile gaming addicts in the App Army what they thought, and they had the following to say.

This is a fun new take on chess - I love how they've changed the rules around. The AI is pretty good too, but it's not beaten me yet. 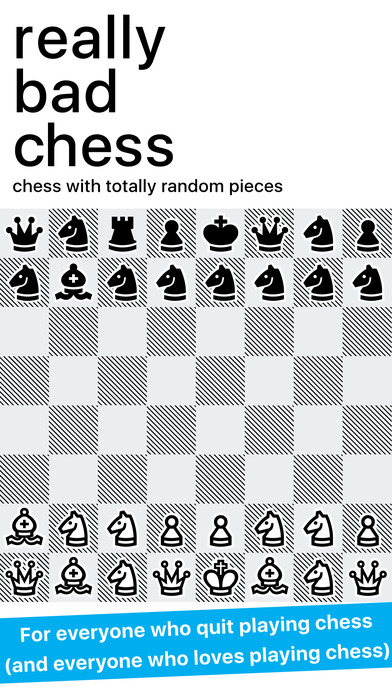 So this is chess except it really isn't.

The problem is, I'd rather just play real chess. Now I'm not saying it's bad because it's not, but it's kind of like diet food compared to the regular option - a little less satisfying.

I'm an avid chess player, and thinking many moves ahead so I can counter my opponent is really enjoyable.

But I'm completely thrown here. All of the pieces are in the wrong place, and you may have three queens and only five pawns.

This isn't a bad thing though, and I'm enjoying it so far. It's chess, but not chess.

Really Bad Chess is almost like someone had a bunch of leftover chess pieces, threw them in a box, and then laid them out at random on the board.

Having a few extra queens and rooks while having less pawns is pretty convenient.

It's pretty fun, but I wouldn't say it's worth paying for the premium edition unless you just want to get rid of the advertisements.

I'm not a chess player, but I know the rules and this looks like chess, plays like chess, but really isn't chess. It's just a mishmash of pieces which makes it fun.

It's not very smart though - as demonstrated by a complete amateur like me completing it. Okay, maybe having a ton of queens helped a bit.

Really Bad Chess is a really good game. You have to throw out everything you know about chess though, as you're given a random set of pieces and really have to consider your moves.

I enjoyed the game a lot. The AI doesn't improve as you rank up, but it does get better pieces than you. This definitely makes the game more difficult, but no less enjoyable.

It's so weird to play chess and not have a standard setup - it's like chess hoard mode or something. It's cool to be really terrible and lose but then get rewarded with five queens the next game.

The monetisation is fair and interesting - you can pay for undos, for example.

Making a mobile chess game interesting and new without changing the mechanics is quite an achievement. It's worth a try.

When is a game of chess not a game of chess? When it's Really Bad Chess. Who says you can't improve on a classic? Regardless of your skill level, this gives you the fun of playing chess but with an interesting twist.

It's free to play but you can upgrade to the premium application to remove ads.

Don't play if you're looking for the classic chess experience or multiplayer.

Mushroom Wars 2 review - A strategy game by the numbers