App Army Assemble: FIFA Mobile - How does it play on iOS and Android?

And how does it stand up to the console games?

This year's incarnation of mobile footy isn't called FIFA 17. Instead, EA Mobile has opted to call it FIFA Mobile, and is seemingly doing away with the yearly release cycle we see on the console versions.

FIFA Mobile will be updated regularly with new features, players, and kits though - and we'll likely see a large update pushed out alongside the console versions each year.

In terms of how it plays, well, it's pretty much the same as FIFA 16 - and that makes sense given the extensive changes EA Mobile made in last year's version, including a completely revamped engine.

Then there's new features like Attack Mode, which presents a variety of turn-based attack situations that you have to take control of. It plays very similar to New Star Soccer. Oh, and Leagues, which lets you compete with up to 32 of your friends in leaderboards, tournaments, and championships.

But the real question on everyone's lips is: is it any good? Well, according to our review it's alright, yeah. We gave it a Bronze Award and described it as: "A kickabout in the park rather than a Wembley final, but a kickabout with compulsion loops designed to keep you playing until long after you've been called home for tea".

What do you, our community, think of it though? Well, we asked our stalwart bunch of experts in the App Army exactly that, and they had the following to say. 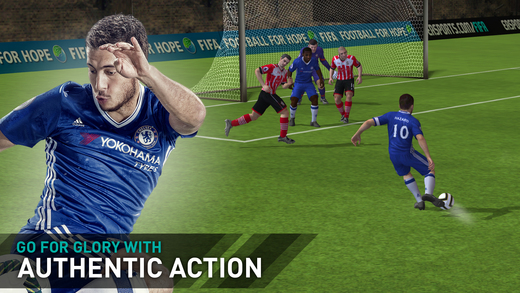 I don't like Ultimate Team so there's not much here for me. I just want to play as my favourite team!

FIFA Mobile tries very hard but doesn't reach the heights it wants to. It's more of a training simulator with CCG elements than a fully-fledged FIFA game.

The controls and graphics are a bit poor and dated. It feels like I'm playing a three year old game.

It plays and looks terrible - perhaps the worst of any FIFA ever. It's just the same as last year with a few new features.

I've been playing the soft launch, and it plays quite similar to the Madden and NBA mobile series.

That's both good and bad, as it plays well enough but shares similar issues. It needs an update or two until it's the finished product.


I'm not feeling this. It's just another shameless money grab.

I haven't got a clue what I'm doing. It appears to be a collection of vaguely football-related minigames but doesn't let you actually play a match.

In an ideal world, EA would just let the New Star Soccer team develop it using the FIFA engine, and make it a premium experience.

Sadly, we don't live in that world.

I've been playing this for a couple of weeks now. There's an energy system, but it was in the last two mobile iterations as well. Besides, the events provide you with worthwhile rewards, so it's not too punishing.

The gameplay is no doubt a downgrade on the previous games though. The graphics are worse, the AI is poor, and the overall experience is way less fun as a result.

One positive is that FIFA Mobile basically plays on all devices now, which is good.

I quite like it, but would rather play Sensible Soccer.

It's rubbish. The controls are awful, and I actually score more goals if I let the computer take over.