How are you getting on with FIFA Mobile? It's quite a departure if you're coming to it from console, or even from past mobile versions of the game.

Meanwhile, if this is your first footy game (as in many ways it's designed to be), you'll probably be cautiously inching your way into its many systems.

The most daunting of those, of course, is the actual gameplay itself. EA acknowledges this by enabling the game to essentially play itself if you don't interfere with it. But if you really want to succeed in FIFA Mobile - as well as to wring the maximum fun out of it - you'll need to tackle this side of the same sooner or later.

That being the case, here are some basic tips for general gameplay in FIFA Mobile. 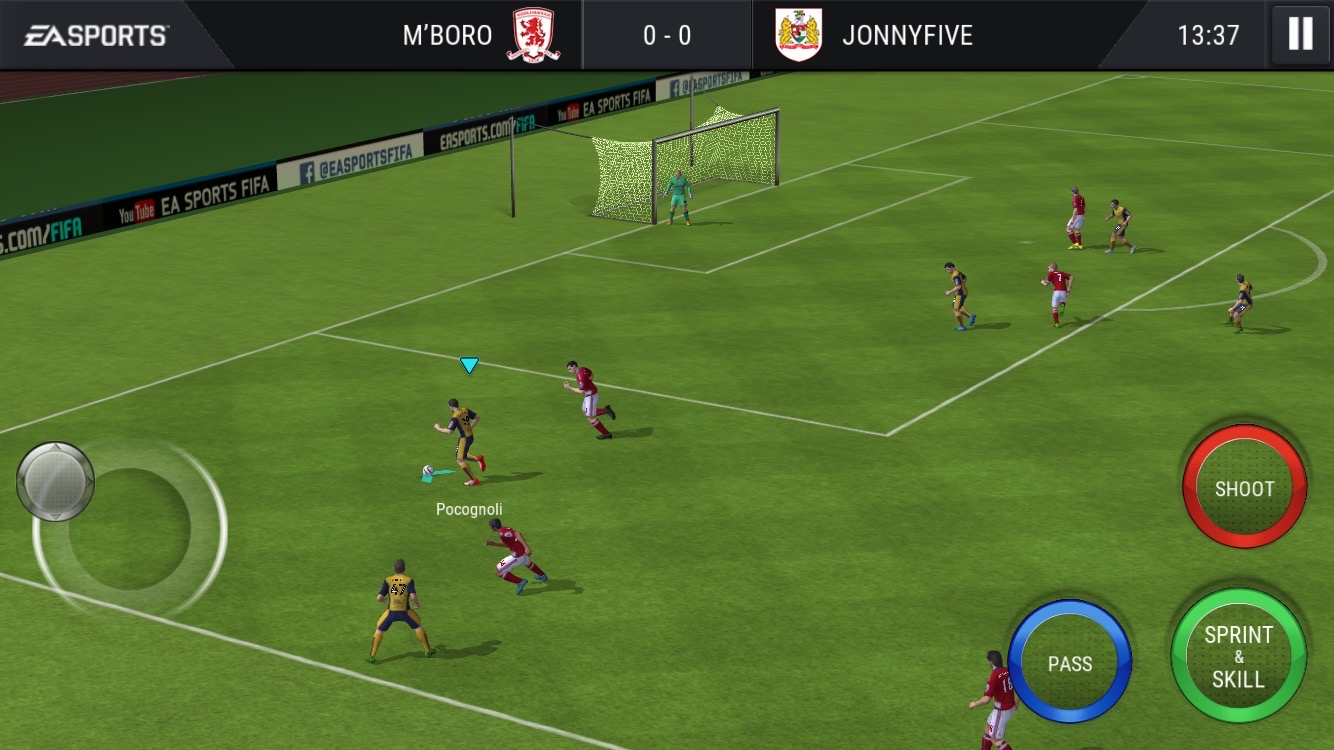 Crosses are, by their very nature, a pretty low-percentage game in real life. Typically, lobbing a bunch of balls into the box will only yield a limited number of chances.

That's just peachy over a 90 minute match - and even in FIFA Mobile's time-dilated Season mode, it can be an effective tactic. But in Attack Mode, crossing is just not a good idea.

Each phase of Attack Mode is about engineering the best chance of scoring as possible, and throwing in long ball from the flanks in the hope of getting a free header is just about the worst way to achieve this.

Of course, if you spot your striker unmarked in the middle, there's nothing wrong with picking out a long pass to him. But even then, I'd recommend bringing the ball down rather than going direct for goal. 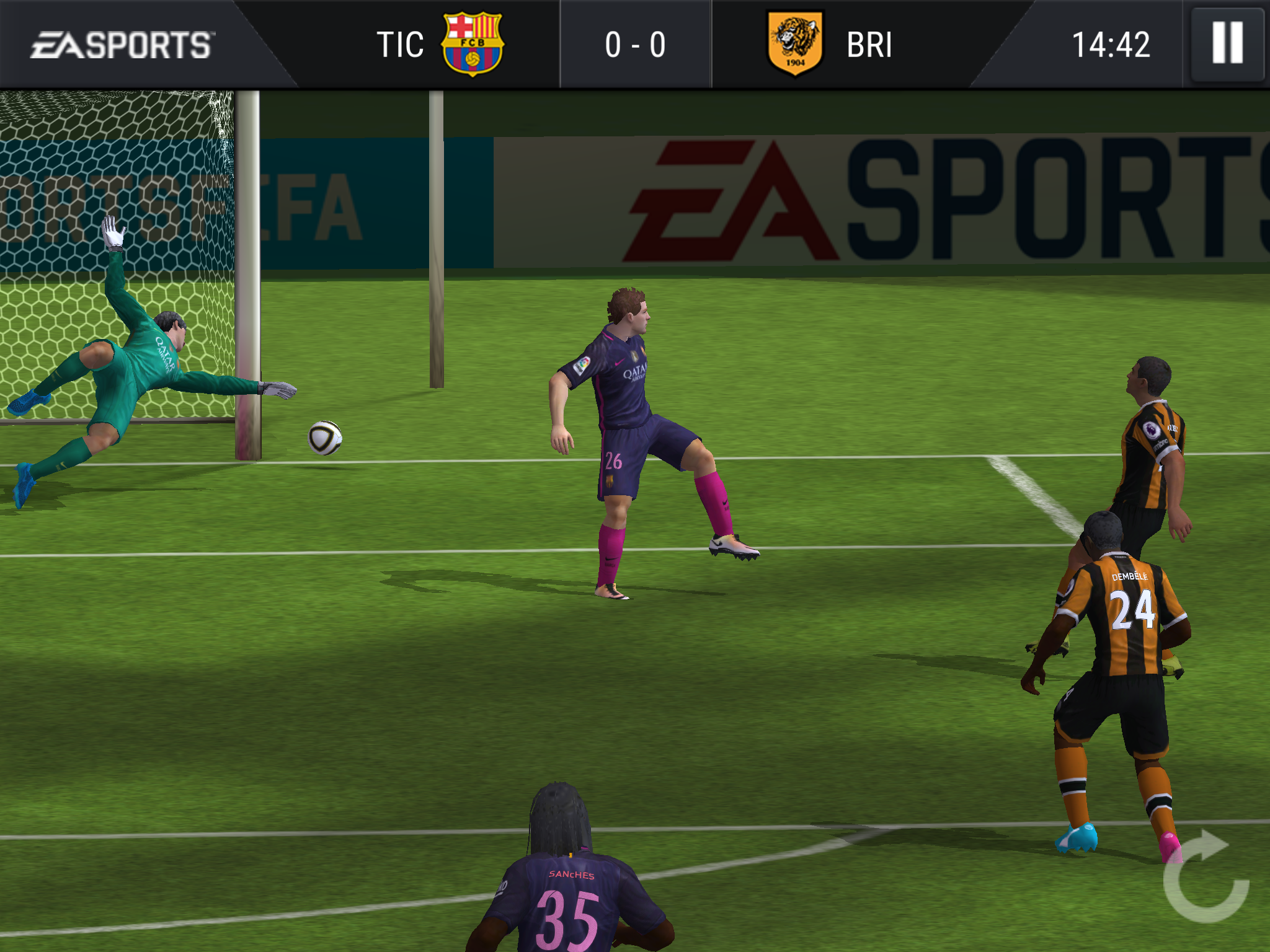 The best way to score in FIFA Mobile, in whatever mode you're playing, is to get into good shooting positions within the box. That sounds like an obvious point if you know anything about football, but its importance is much higher here.

Angled shots inside the box, taken from somewhere close to level with either post, are the closest to a surefire goal in FIFA Mobile. Again, you might want to mix things up in Season mode, but in Attack Mode you can't afford to be quite so flamboyant.

Shots from distance or from a tight angle generally won't get you too far - at least not until you start acquiring really good midfielder and attackers respectively.

Another solid tactic is to bring your wingers inside and cut the ball back or pass it low across goal for an instant side foot into a relatively unguarded goal. Provided the receiving player isn't tightly marked, it's another high percentage shooting tactic, even with low-level players. 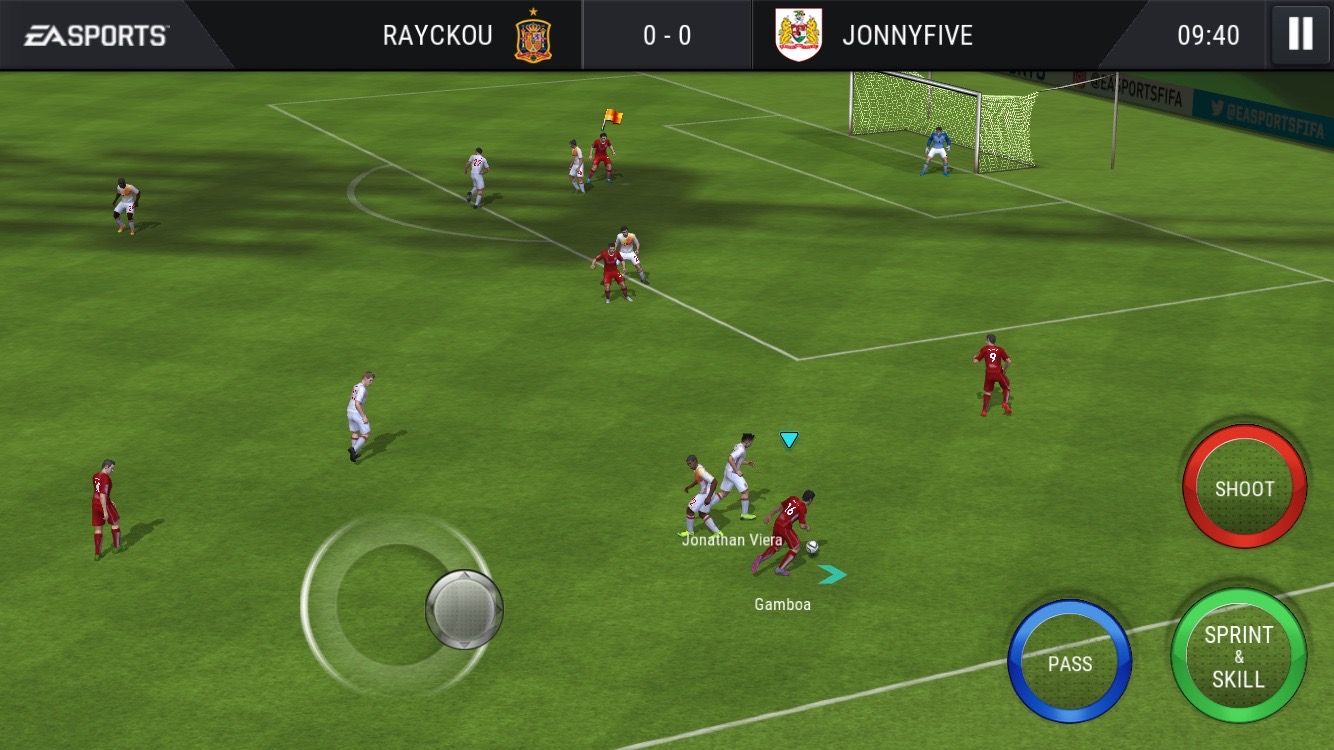 Carrying the ball is an important part of FIFA Mobile, but its approach is more Theo Walcott than Lionel Messi. The nature of the game's controls, weighty inertia, and AI limitations means that jinking runs are less viable than simply isolating a defender and running into space.

Varying your pace is effective. Slow the defender down with some normal-pace dribbling, nudge the ball away from them and hit the sprint button. They'll be left trailing in your wake time and again.

By all means throw in the odd skill move, but know that a no-nonsense approach to dribbling is far more consistently effective. 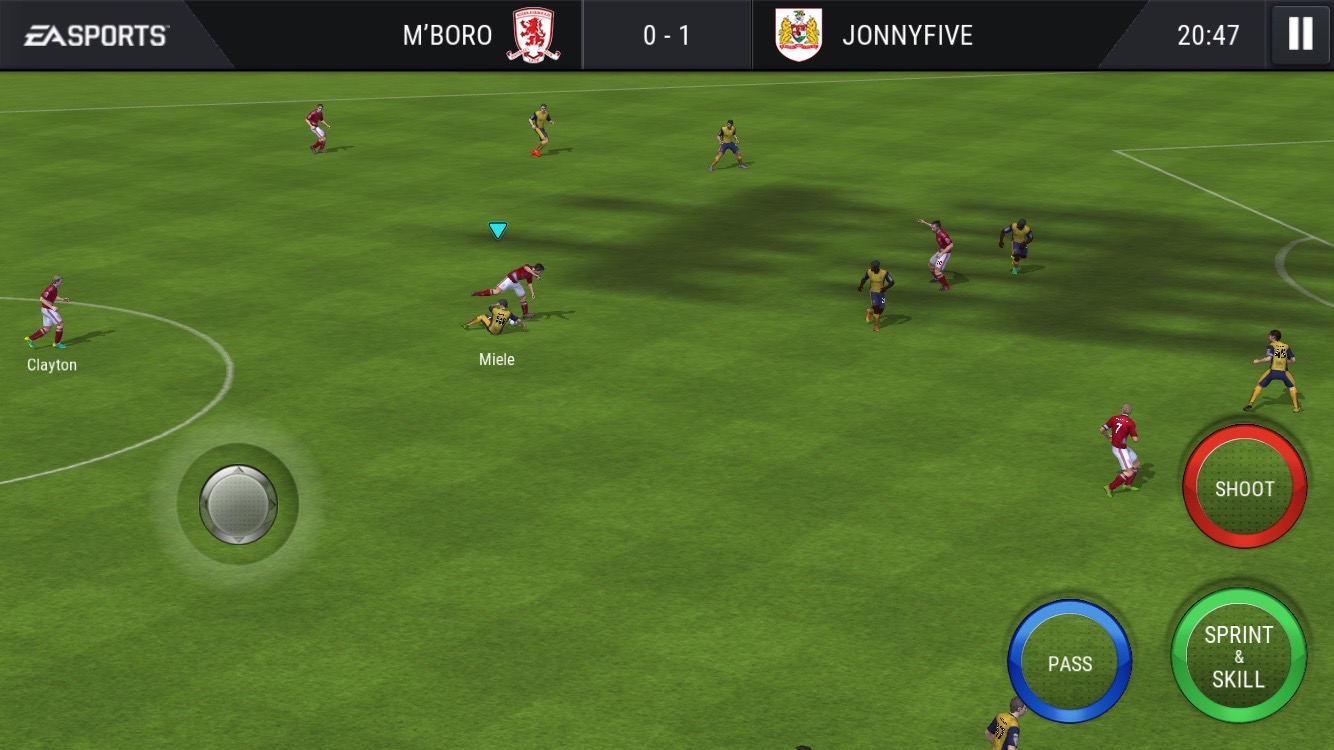 You'll probably find that tackling is the last art you master in FIFA Mobile, chiefly because you don't actually get to do much (or any) of it in Attack Mode. It's not until you unlock Season mode at level eight that you'll have to worry about the defensive side of the game.

The key thing to remember is that the slide tackle should be used sparingly. It's easy to think that this is the main way to tackle, given that it's got its own button while 'normal' tackling has to share space with the sprint button.

But the latter should really inform how you do your defending. You'll find that the AI likes to run straight at your defence, even from deep positions, so the best way to deal with this is to track the run at pace and gradual squeeze in on the ball.

It means you won't leave the opposing player free to pass or shoot uncontested, and your player will eventually nick the ball away if they hog it too long.

The slide tackle should be used chiefly when facing a running opponent head on, when the ball isn't under close control and you judge that you'll get there first with a lunge. Or as a last resort.

Keep an eye on the blue arrow 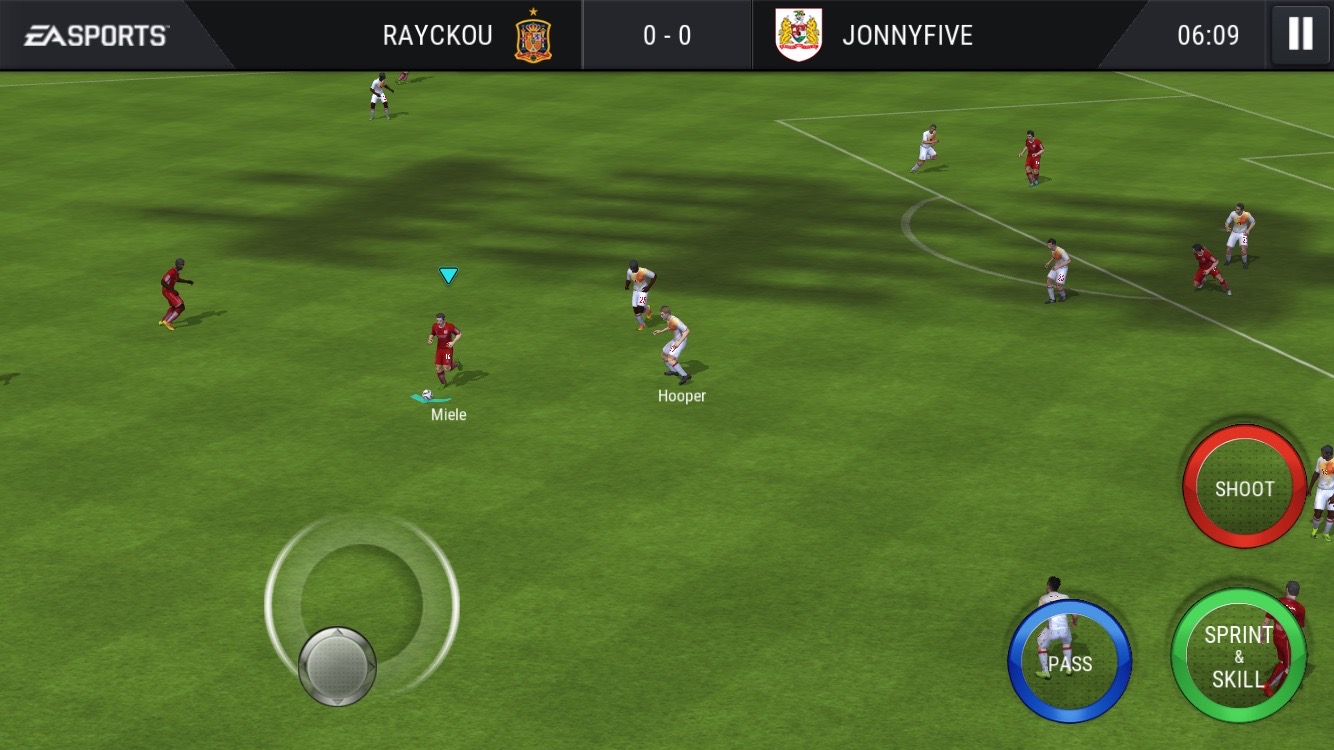 Taking direct control of your players is really the only way you should be playing FIFA Mobile - but it can be tricky to judge which way you're 'aiming' with that floaty virtual stick.

Pay close attention, then, to the little blue arrow near the feet of the player you're controlling. This is a direct indicator of the way the virtual stick is facing, rather than of which direction your player is running.

By watching this rather than your player, you'll be able to judge where your passes and - crucially - shots are directed. It's essential to orienting yourself properly.

Galcon-like Mushroom Wars 2 is out now on iOS