Can you survive the onslaught of modern reality?

Crap! I'm Broke is, for want of a better description, a millennial simulator - it pretty accurately depicts the lives of this generation's crop of kidults.

You play as a penniless person who's just been thrown into the very deep end of life, and have to do everything in your power to survive against crushing waves of debt, hunger, and sadness. Just like in real life.

It's got pretty cubic visuals as well, which is nice to see on a platform swamped with voxels, pixels, and shiny-smooth 3D graphics.

At review, we gave it a solid Silver Award and said: "As crushing to get used to as real life, Crap! I'm Broke rewards dilligent players with a frantic fun time."

But don't just take our word for it. We also provided early access to our stalwart heroes in the App Army. Read on for their impressions. 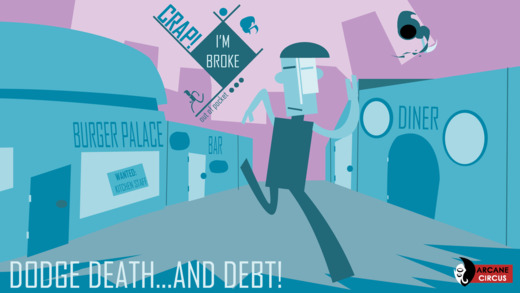 I'm kind of expecting a big burly dude to knock on my door and offer fix my heating.

Not sure about the game though - it seems a little messy to me. I know what I'm supposed to do, I just don't get why I'm doing it.

Washing dishes is fun for the first 20 or so, then it's a bit dull - and that issue extends to the other minigames. It's just a bit too simple and needs something more to warrant the time spent playing it.

Bit of a peculiar game but okay so far! I got into debt by december.

This game feels unfinished. The art style is nice if a bit wonky - as if it's been scaled and badly cropped. Nothing sits nicely on the eye.

Also, it's just plain buggy. I starved to death when my hunger meter was full but my bills meter had run dry. It's just kind of pointless.

This game didn't keep my attention for long. The minigames are just too simple and repetitive, the controls aren't smooth, and the storyline doesn't go anywhere.

It's a shame because the idea is there, it just needs better delivery. With a few improvements it could be a much better game.

I found this very boring. The gameplay isn't very engaging, and the story is non-existent. I wouldn't pay for this.

There is a game here. You have to micromanage your character's life and play some really bad minigames like scrubbing plates.

It's frustrating that it ignores the orientation of your phone and doesn't allow you to turn the sound off.

With better minigames that provide a little challenge and a fleshed out story that engages you a bit more this could be a winner. But as it is it's just dry and lifeless.

This game is challenging - but in a frustrating way. It needs some work.

I enjoy playing career simulators like this, and it reminded me of a lesser Life Quest. The graphics are good and the minigames are okay but there's no story, humour, or characters to keep you interested. It quickly drags you into the usual grind.

It plays a bit like Dumb Ways To Die but adds a bit of story to it. The minigames are less fun though.

It's pretty polished overall, and the first hour was really fun. It quickly gets repetitive.

The aim is to earn enough money each month to pay off your debts and make sure you don't starve to death. It's a neat idea, and a well executed one, but there just aren't enough mini games to keep you hooked for long.

Gamescom 2016 - Crap! I'm Broke is a life simulator without a twist

Crap! I'm Broke was the third place winner at the Big Indie Pitch at Apps World