If there's one positive that can be applied to Drifty Chase, it's that it's seriously addictive. I learned that the hard way at this year's Pocket Gamer Connects Helsinki, when I kept running back to the booth for just one more go.

It also helped that I had a high score to beat. Which I didn't manage in the end. I'm not bitter.

It's a high score chaser in which you rob a bank and have to run away from the cops who will stop at nothing to, well, stop you. All you have to do is tap to turn, drifting around bends at progressively faster speeds.

Meanwhile, you've got traffic - which includes fast and slow moving vehicles - and obstacles to avoid. It's really tough to drift around tight corners until you've got the hang of it, but you'll be inclined to do so. Such is its addictive tendencies.

We'll have the full PG review up shortly, but in the meantime you can read the thoughts of our hardened bunch of mobile gaming experts in the App Army below.

I really like this. You tap to turn left or right depending on the direction the arrows on the road are pointing but have to watch out for traffic. It's very addictive and fun. This will be a great time waster for some time to come. 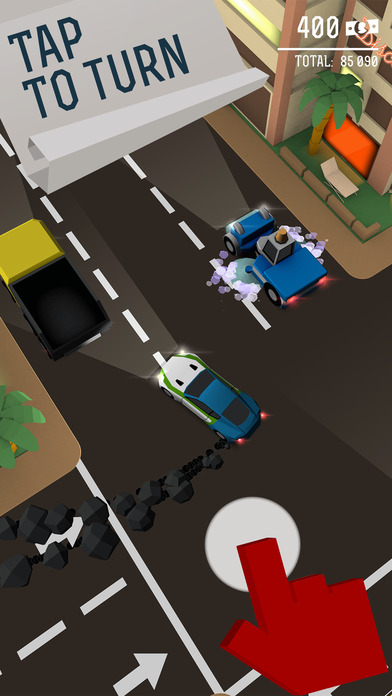 Drifty Chase is a one tap score chaser. There's no plot, the graphics are passable, and it's a bit repetitive. I just feel like there should be more to it.

It's fun for a little bit. But after a while it's gets really boring and repetitive It's a good time waster for a few minutes but that's it.

I'm with the others on this - it's kind of dull. The production values are high, but the actual core loop isn't that great.

There isn't really much to it. Even a swipe left or right every so often might make things more interesting but you literally just tap the screen to turn the corner. Over and over again.

It's not bad, but not impressive either. You're on the run from the police and have to navigate through traffic in various cities. You follow the arrows and try to avoid bumping into cars and buildings - which is quite difficult in the narrower streets.

The number of turns you manage until you get caught represents your score, and you can collect money on the way to buy better cars.

It's colorful with clear graphics but the different cities don't provide new mechanics - it's just an aesthetic change.

It's a good time waster but will inevitably become monotonous at some point.

It seems okay so far, but I can imagine once you've mastered it it becomes repetitive.

The graphics and interface are beautiful but the gameplay is too limited - it needs more content.

I loved this game at first but it quickly became repetitive. You drive a car pursued by the police and have to tap the screen to drift right or left around the corners, depending on the way the arrows on the roadside are pointing. This would be challenging except for the fact that once you tap the screen, the car automatically moves in the right direction.

You collect dollars to upgrade your car but, aside from aesthetics, I didn't notice any difference. The graphics are decent and it's easy to pick up and play but unfortunately, in its current state, I got bored quickly.

All style and no substance. It's not a bad one-hand game for playing on public transport, in a queue, or whenever you have a short window of time. It's fun but gets old very quickly.

Not terrible but it probably won't stay on your phone long.

I've enjoyed this. I feel like the play sessions are a little short, lasting maybe 15 seconds at the most, but it's a pretty game.

It's fast paced, with some quirky turns (a truck you slide under that is carrying wood). Enjoyable, but I don't see myself playing it very long.