We've seen an absolute abundance of Sherlock Holmes games over the years, but what about his moustachioed Belgian comrade, Hercule Poirot? He's been criminally (get it? - ed) overlooked.

Well, not anymore, as Agatha Christie's The ABC Murders, which first launched on PC and Mac, has now arrived on iOS and Android. It's an adaptation of the Agatha Christie novel of the same name, and lets you play as Poirot as he undergoes a battle of wits with the mysterious murderer, ABC.

At review, we gave it a respectable Silver Award and described it as a "smart and effective point-and-click adventure that's a lovely way to waste an afternoon".

We also gave our lovely community in the App Army the chance to have their say. Read on for their thoughts.

The visuals have a Telltale vibe which is no bad thing, but going with such bright colours for a serious murder mystery game is a bit bizarre. The game does do a good job of capturing that era with lots of details in the environments and I loved the voice work.

It's a pretty good point and click adventure that borrows a bit from Sherlock Holmes. I liked how you had to use your observation of characters when questioning them.

The puzzles aren't hard so you shouldn't really get stuck on them for too long, but I found myself wanting a bit more of a challenge. 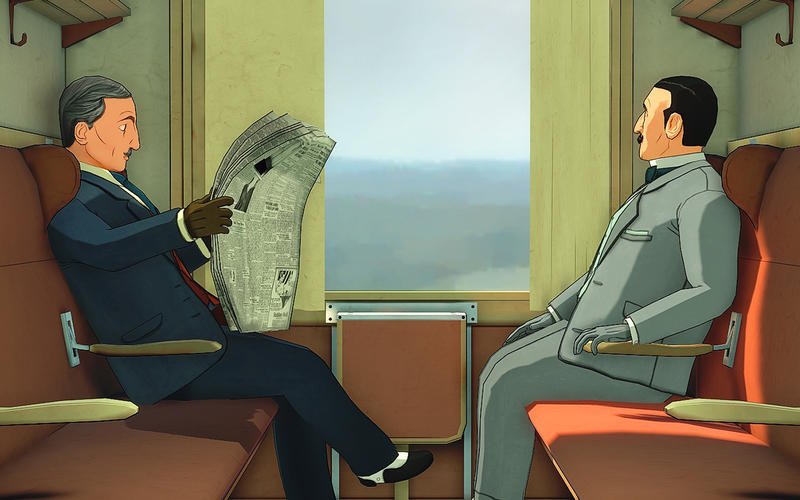 The good, the bad, and the ugly - that sums up my feelings towards this game.

The story's the best part. It follows the book quite closely, and plays in a similar manner to hidden object puzzlers. You have to solve a mystery as Hercule Poirot, and it gets across the thrill of completing cases really well thanks to some solid writing.

There's a lack of challenge in the design of the puzzles though, and the dialogue choices are are pretty limited.

I also don't like the design - it's a bit bland, and the scenes need more animation.

Take a point and click adventure, mix it with a physics puzzler, and sprinkle in some excellent narrative and you're left with Agatha Christie's The ABC Murders.

The puzzles are enjoyable but not very challenging. You're led to each clue so you don't have to do any real detective work.

I did like taking the clues and placing them on a map to deduce the facts. All in all an enjoyable game that falls on the easier side of puzzle solving.

I have to say, the production values, voice acting, visual style, and animation are all top notch. The voices fit the characters well.

In terms of gameplay, I don't think there's much challenge here. I've put about an hour in so far and haven't had to scratch my head once.

You literally just tap circles when they appear and work through each option. I'm enjoying it though and am looking forward to unravelling more of the story.

Hot and cold. I like the graphics, ambience, general scenario, the psychological approach of Hercule Poirot, and the important link with the Agatha Christie novel.

But it's far too driven. There's no real discovery, no freedom, no hard research. It's just too simple, basically. In addition to this, it's too short.

The game has a decent pace and isn't too taxing on your neurons. The visuals could do with some polish though.

You can poke your way through the puzzles easily enough, but if you do get stuck, you can get a clue how to progress. It has that Telltale vibe but it doesn't punish you quite so badly for making the wrong choice.

Narratively, it's very engaging. Hercule Poirot is a rather intriguing character to play as - I both and loathe him.

This is a good game, but it leaves me wishing for more. A harder mode in future perhaps?

This is a point and click adventure with Hercule Poirot playing the detective and trying to solve murders. The artwork reminds me of the Broken Sword series and the plot moves along quite quickly. You have clues to find and then theories to prove, along with interviewing witnesses and suspects.

Most of the puzzles I've played so far are easy enough to finish and I found myself wanting a bit more of a challenge. I was also irritated by the accents and had to turn the sound off. As a Hercule fan I thought it could have been more authentic.

On the whole it's a very enjoyable game and I hope there will be more book adaptations to follow.

I really like this game so far. It was originally on PC, but feels right at home on mobile. Tapping, swiping, solving puzzles - everything works great.

It's odd that no one has compared it to The Room yet, because it looks a lot like it. While investigating you'll have to open boxes, cabinets, and other objects. Just like in The Room, you do this by solving small puzzles and by searching for hidden spaces.

I've always loved solving puzzles and watching crime series, and this game mixes it perfectly. It would be a crime not to try this game! (Love it! - ed)

I think this game is great. I wasn't expecting spoken dialogue though, and was surprised to find that it was very authentic.

I love to see well known characters from literature in games, if they're done right. In this case, I think they did it wonderfully.

After finishing it on iPad, I reckon I'll get it on PC. The graphics are brilliant, the storyline is great, and the gameplay is incredibly enjoyable.

The puzzles are challenging but fun. Overall, it's a good mystery adventure game.

Spy-tastic puzzler Agent A: A Puzzle in Disguise is headed to Android next month