You're likely no stranger to the survival game. From Minecraft to Don't Starve, the genre mainstays of crafting, dealing with hunger, enduring the elements, among others, have spread into myriad games and across genres.

Frost takes those well-worn, well-trodden elements, and presents them through a new lens, and while you view this frozen world through cards and turns, it's no less of a bleak and tense experience.

Much of that bleak atmosphere comes from Frost's stark sketched artstyle. Through white and tints of blue and splashes of red, the game imparts this sense of overwhelming cold and blood-stained snow. It absolutely sets the tone of the desperate fight for survival that outlines Frost's card game core.

All those survival game aspects - scavenging for supplies, crafting weapons and cooking food, dealing with the horrors lurking in the snow-swept lands - are all present in Frost, cleverly morphed into card form. You start with a set deck, based on difficulty or scenario, consisting of survivors, supplies, and fatigue cards that clutter your hand and must be removed by resting.

Turn-by-turn, you enter a region that requires a certain card requirement to pass through, while also dealing with events that both help and hinder. Cannibals and wolves require weapons to fend off, while other group, camps, and others can swap cards from your deck for additional survivor, supplies, and other effects.

This give-and-take is the basis for Frost's strategy. Do you use a survivor and supplies to activate a expedition card to gather wood, or do you trade for needed supplies? Cannibalize one of your group for food? Craft a spear or pickaxe? Do you stay in a region for a few turns, risking more fatigue, or keep traveling onward? While Frost is a card game, it's those decisions that makes each turn feel like the desperate choices of struggling survivors.

Fatigue isn't the only threat encouraging you to press forward. Temperature is a variable that must be managed, cooking hot food and using supplies to build campfires to stave off the cold that limits how many card you can draw.

But the cold is relentless. The titular Frost is a raging continent-wide storm, an arctic tempest that your survivors are trying to escape. Every time you rest, the storm grows closer, while traveling keeps you one step ahead. That ever-looming threat adds a constant tension to your turns, and imbues those fatigue cards with a greater sense of danger than simply a cluttered hand. You'll have to rest eventually. 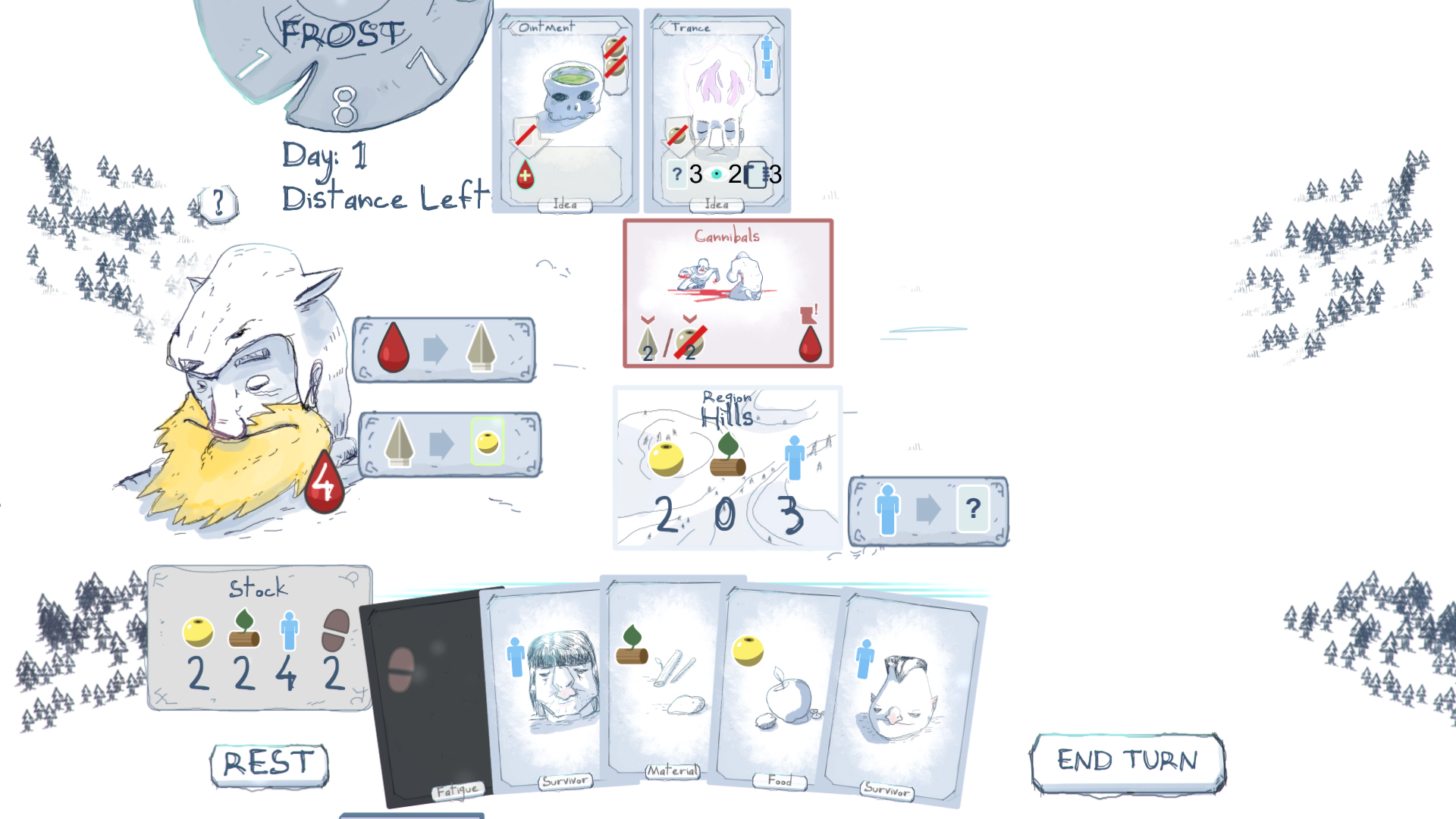 Frost leans towards a roguelike style of progression, so expect to die before you reach the fabled Frost-free Refuge. But with each death comes a better understanding of the game's strategies, and success brings new cards, new difficulties, and challenging scenarios featuring special characters like the Hunter and Tracker with their own stories.

That difficulty inherent with roguelikes, combined with the RNG nature of card games, can frustrate over time, but Frost offers enough variability and atmosphere in its frozen apocalypse to overcome those elements if you're looking for a unique take on the survival and card game genres.

A frozen apocalypse and focus on tense survival makes Frost an original and challenging variation on the card game
By Christian Valentin
| Sep 27, 2016 |
iOS + Android + Steam
Find out more about Frost
SEE COMMENTS

Criminal Girls 2: Party Favors - Will you go to Hell for playing this?

Not a Clone is a mini-game medley, satirical of the mobile game market