If Dark Souls won't come to mobile (even though it kind of did), then mobile will come to Dark Souls. That really is the best desription of Dungeon of Gravestone, a mobile RPG / roguelike that just launched on iOS and Android.

It's not a carbon copy though. Instead, it shrinks the most important elements of Dark Souls into their most mobile-friendly forms. How that plays is, well, very similar to its predecessor - BlockQuest.

Taking its cues from Crossy Road, you flick with your thumb to make your character hop in that direction, and furiously tap to move more rapidly. You'll use these simple controls to fight enemies, press switches, fire arrows, and use bombs to blow up walls as you explore a deep dungeon, levelling up, collecting gold, and getting new gear along the way.

Whenever you die, you can leave a message on your tombstone to warn other unwitting players of potential pitfalls ahead - much like in Dark Souls.

I'm sick of typing Dark Souls now, so if you'd like to learn more about Dungeon of Gravestone, check out the full PG review. Or, for an alternative opinion, read on to learn what our hardened bunch of experts in the App Army thought.

There's a strange and eery sense to Dungeon of Gravestone. The controls are very intuitive and easy to pick up, and there's an array of interesting items to use as you make your way through the dungeons.

It's quite a fast paced game - quite similar to Crossy Road but far more manic! 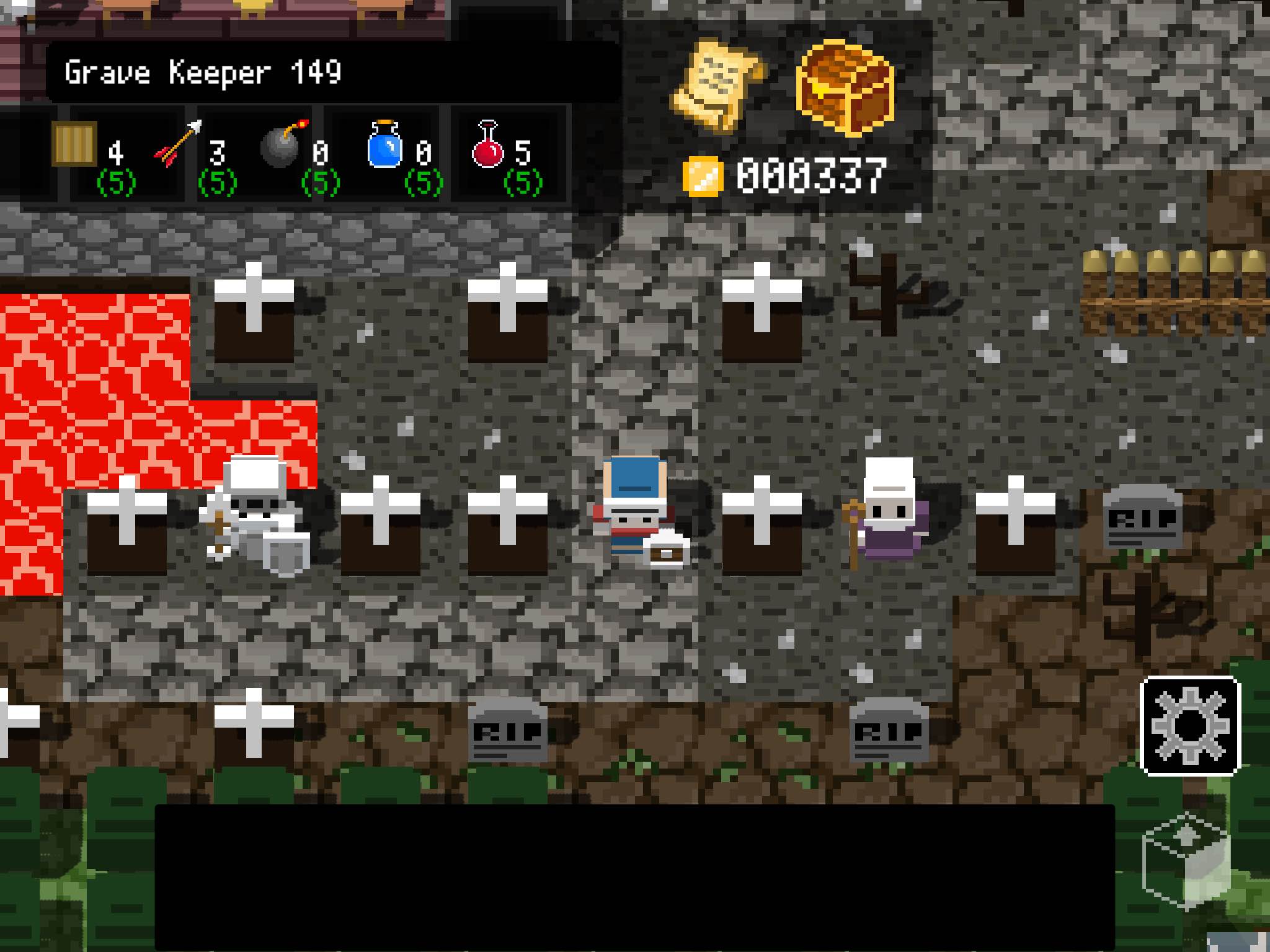 From my experience, the controls are great on tablets but not so much on mobile.

It's easy to pick up and play, but you'll die a lot in the dungeons while trying to collect coins to buy more interesting items.

The ads that appear at the bottom of the screen are a constant nuisance. I'd have prefered a video to pop up occasionally, as the ad can get in the way.

I enjoyed delving into the many dungeons and the pixel art graphics, but it quickly became tiresome for me.

It looks and sounds good, though the controls take some getting used to. I've died more times from mishandling of the controls than by the monsters themselves.

When I play, I'm reminded of a very basic version of Legends of Yore, an RPG with a similar style.

Ultimately, my interest in Dungeon of Gravestone waned a bit due to some bland design and relative lack of challenge. 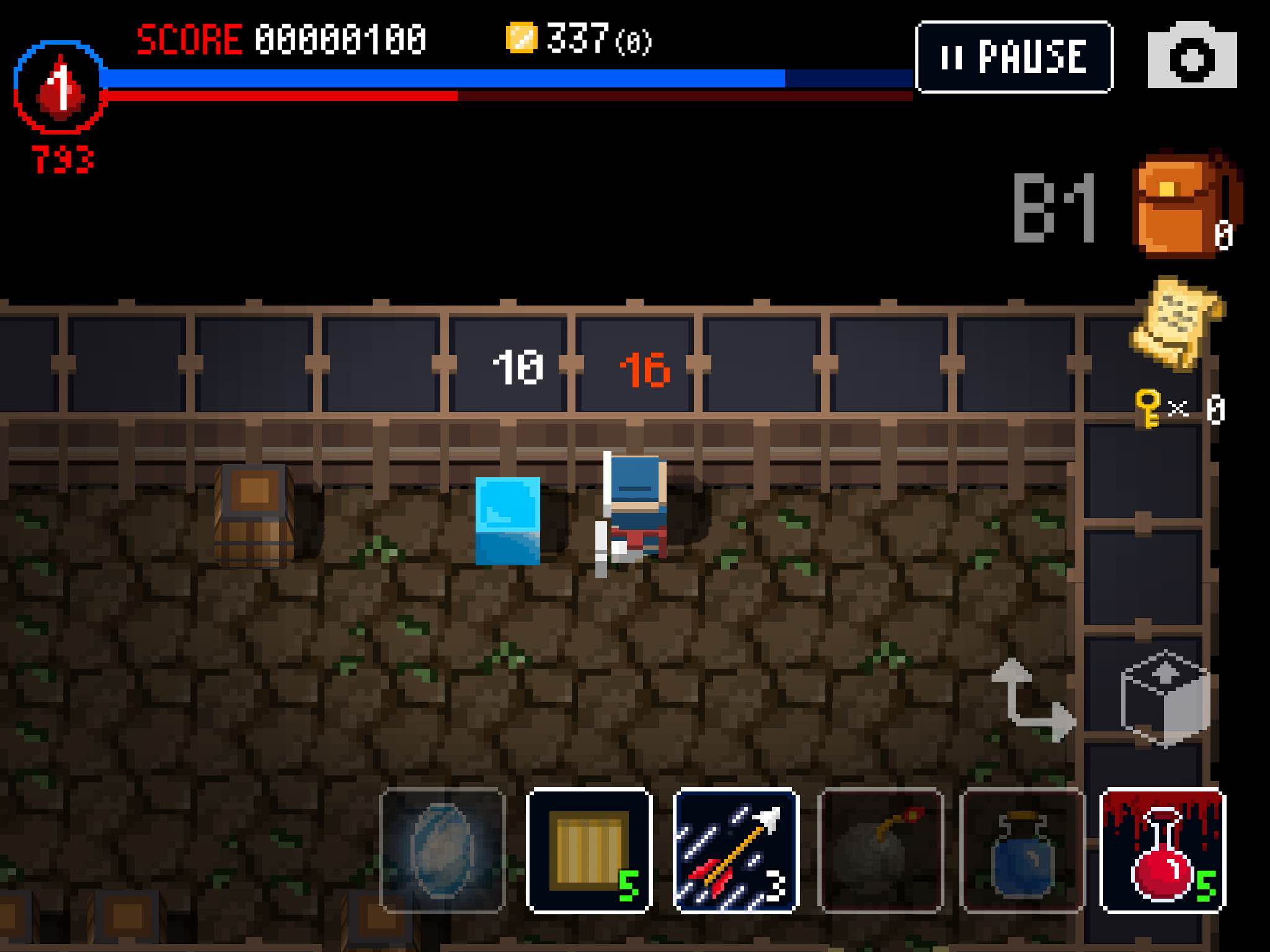 I like this game, as it ticks so many boxes. It's a roguelike RPG with Minecraft-inspired retro visuals but its own flair.

The controls are nice and there's humour to be found if you go looking for it. The ads at the bottom of the screen didn't really distract me - in fact, most of the time I didn't even notice them.
You can also watch videos to get more gems.

I'll be playing this a long time to come. It's varied and fun and feels like work has been put into it.

So far so good.

Wow, I really like this game! The graphics, gameplay, and controls are smooth. It's a refreshing experience that's full of charm, fun, and addictive gameplay.

I like this game so far. The controls are easy, the visuals are pleasant, and it's easy to pick up and play. I had to turn the music off though, as it was driving me mad! 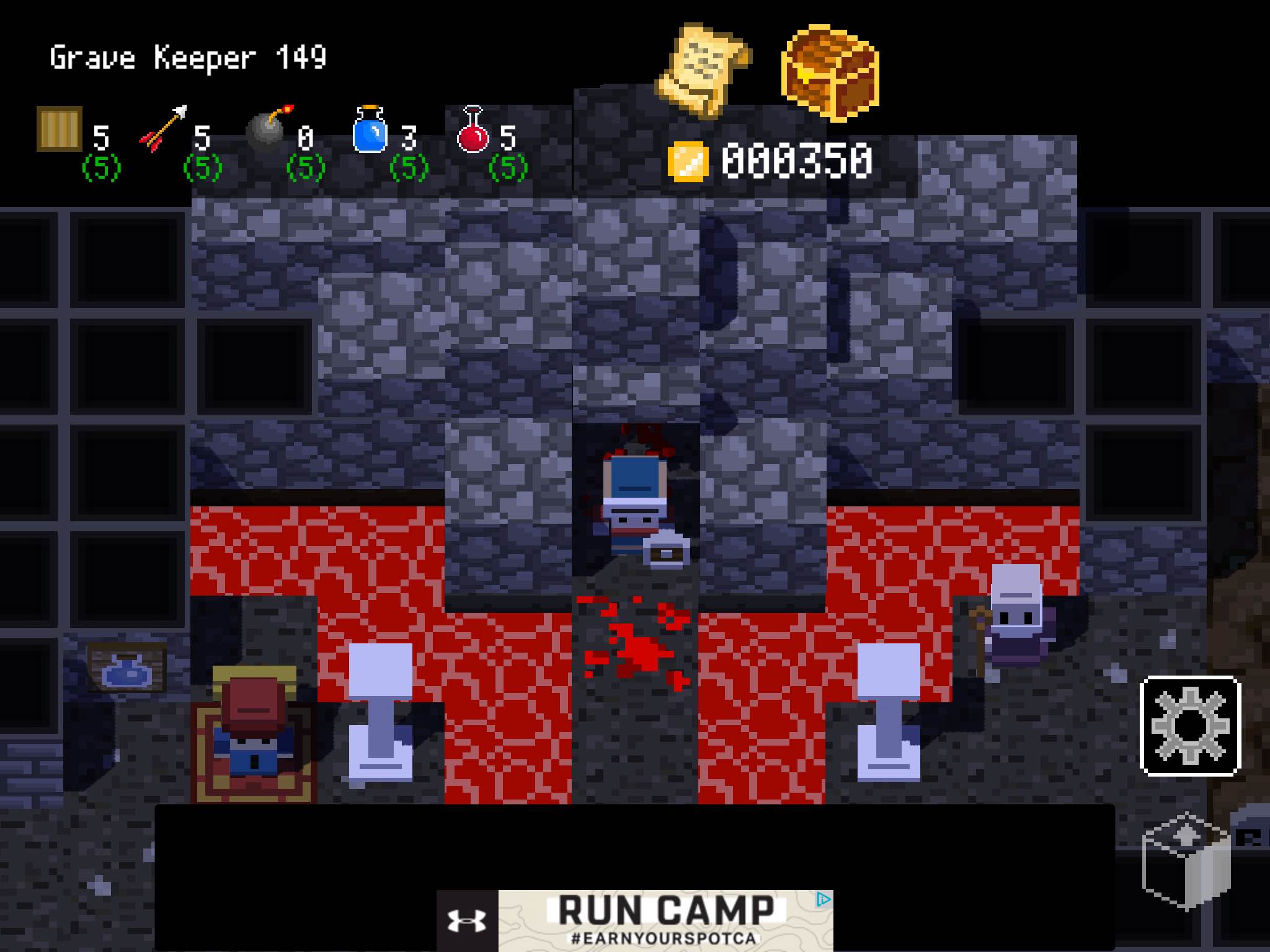 You'll kill enemies, collect items and coins, unlock gates using levers, and go through portals in the many level-based dungeons. There's a button that allows you to get an aerial view of the level to see where enemies and keys can be found, which is handy as sometimes they are hidden by walls.

You return to town to sell or exchange the items for energy and weapons.

At the moment I'm happy to continue playing but I'm not sure if it would become too repetitive as the game goes on.

In a store filled with RPGs, roguelikes, and everything in between, this game pales in comparison. Aside from when wrestling with the controls it lacks challenge and just doesn't have much to really recommend it unless you like grindy repetitive games.

Ads break the immersion and there's nothing to make me keep playing. Sorry, I really didn't like this.

Initially I didn't think I was going to enjoy this. The controls were a bit clunky, and it didn't feel very natural. However, I really got sucked in by its charm. It's presented beautifully and has loads of character - I've really enjoyed it.

There's room for improvement though. Having to go into a menu to change your orientation is annoying - as are the ads. 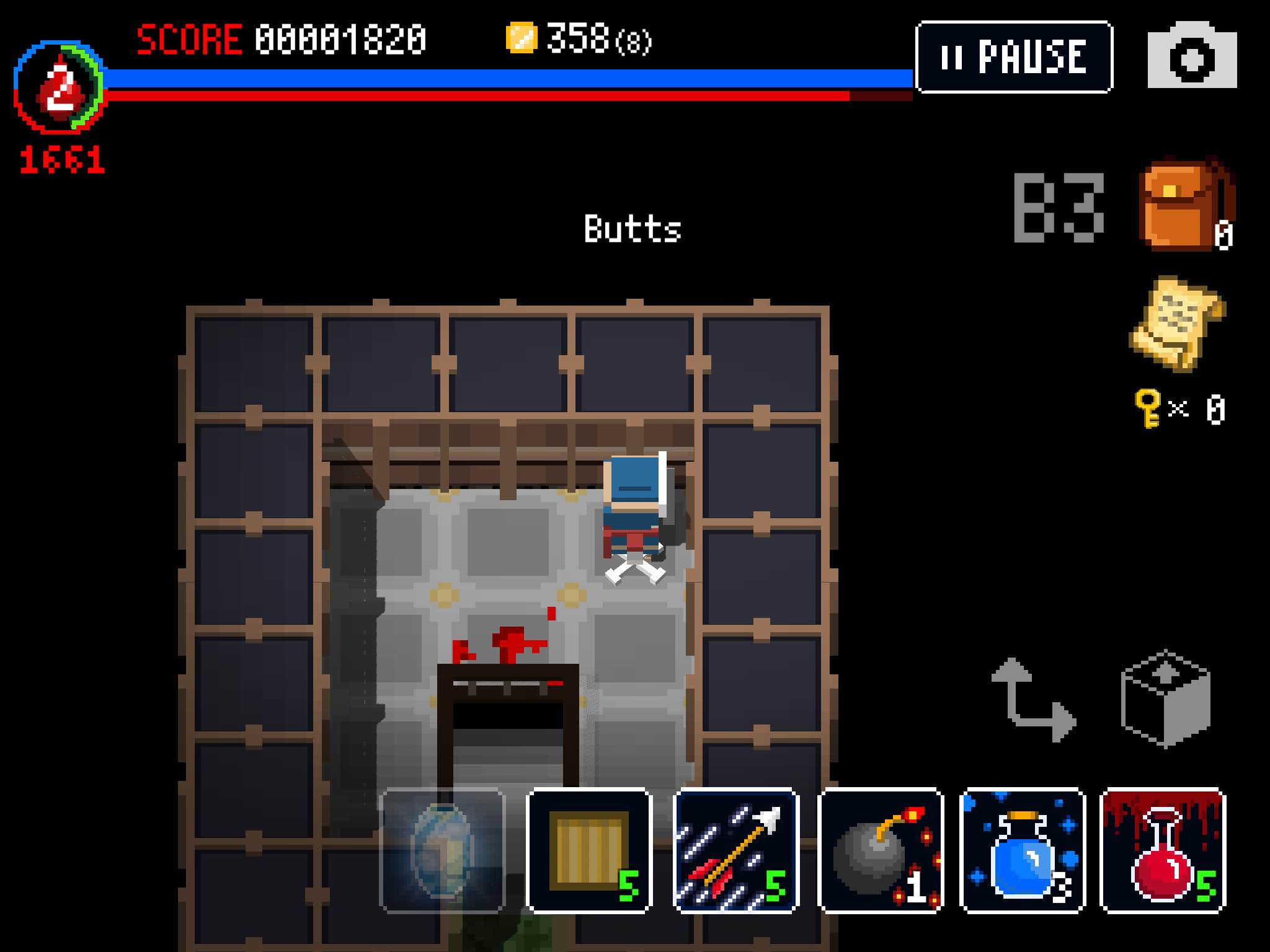 The graphics are great though, and if the controls could be smoothed out a bit it would be amazing!

True, tweaks to the ads and controls would go a long way. I think it has solid foundations, it just needs more time in the cauldron.

I played and enjoyed BlockQuest a ton when it launched last year, and I can safely say that Dungeon of Gravestone is an improvement in every aspect. It's a much meatier experience with plenty of dungeons to conquer, a character to level up and equip with various items, and Dark Souls-style social elements thanks to notes you can leave on your tombstone.

It's also way more forgiving, which I appreciated. In BlockQuest, you can quite easily fail levels due to the strict time limit, leaving little time to explore - which is a shame when the level design is as good as this. Here you can explore at your leisure, though the time limit remains a welcome motivator.

That being said, I do agree with a few of the sentiments which were expressed here. The controls are a bit cumbersome, and are often unresponsive in the town menu. The ad placement is also a bit bizarre, as it's right where you're tapping to move. A cynical move on the dev's part?

Sort those relatively minor issues out, and we've got a seriously good RPG / roguelike for mobile that makes for a perfect Dark Souls replacement on the go.

How many times did I say Dark Souls again? 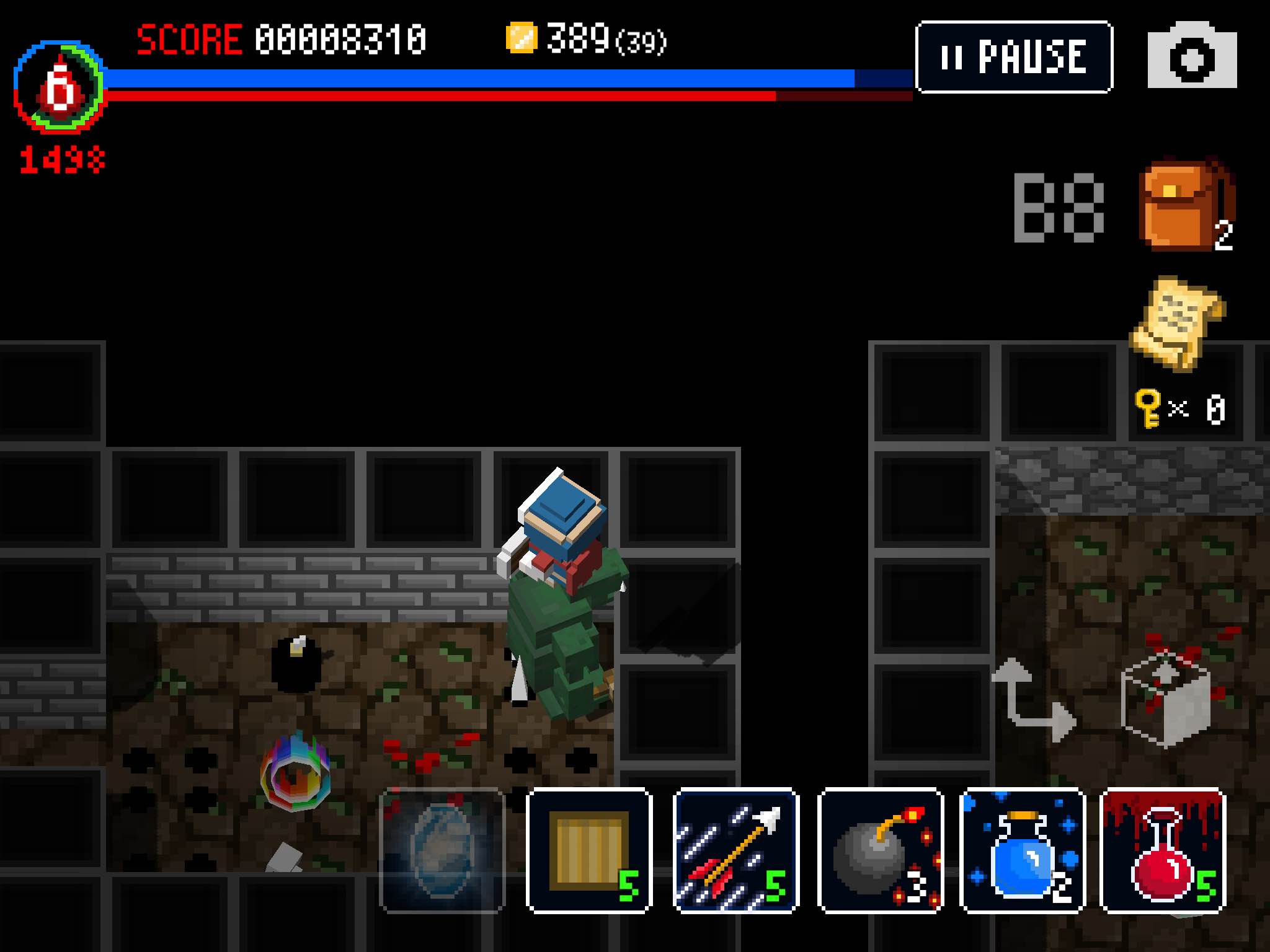 How to unlock all the hats in Rodeo Stampede

Experience whispers from the past in Dungeon of Gravestone, out now on iOS and Android

Dungeon of Gravestone review - A fresh and fun roguelike