Dunkers review - Does it relight those Wrassling flames?

I admit, I'm a bit of a slam dunk connoisseur. I mean, there's something savagely cool about taking the rock and "yamming" all over an opponent. Vince Carter at the Olympics? Hello.

Dunkers is an easy-feeling game that looks to bring that action to mobile gamers everywhere.

Simple does it here. Take the artwork, which pays ode to the chunky 2D arcade titles from yesteryear. Basic colors hold sway, and the animations do the job of getting the gameplay concepts across. 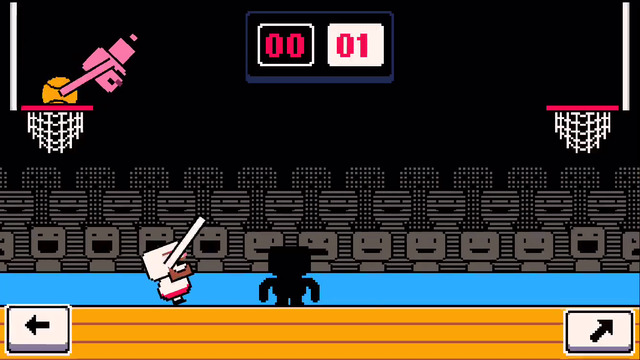 You play in a virtual gym that features two basketball hoops, and control two whimsically long-armed players. There are three modes to pick from: arcade, career, and two Player. The first is more of a standalone experience versus the game engine, career brings in game generated league play, and the last option lets you play against another another player locally.

The control mechanism is really interesting. There's a simple direction button, and then a jump/dunk button. The former gives lateral movement, but the latter invokes bouncy movements which hopefully culminate in rim-rocking dunks.

The game starts with a jump ball, and then the idea is to use the controls to get control of the ball and get it in the hole. It does feel a bit wonky at first, but with some practice, it's possible to become somewhat proficient. With time, one can even steal the ball and such, and it is definitely a game where quick actions are a benefit. 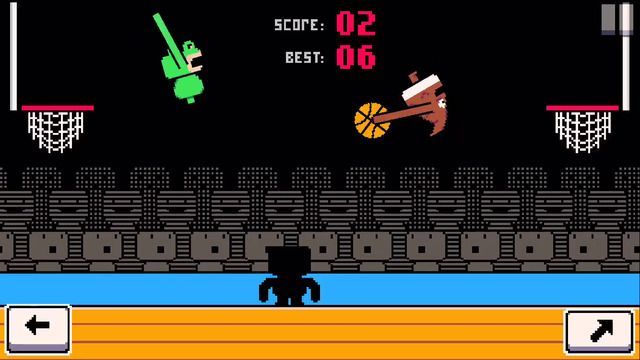 The game does have its charm. There is something satisfying about the smoke game mechanic, and the rudimentary offensive and defensive tools. There isn't much of a tutorial, and respectable time wasting don't always need one. This one is super-easy to get into, and it can be enjoyed in spurts or at length. You need not necessarily be a basketball fan, either.

That simplicity cuts both ways though, because even with the three modes, it is quite a lot of the same. This is far from a full-fledged basketball simulation, but again, it isn't trying to be. The controls could be tweaked a bit, but as-is, Dunkers holds its own.

For those of us who do the cock-backs on 8-ft rims, it might just do.

Easy to get into, but may have one thirsting for a bit more
By Tre Lawrence
| Jul 25, 2016 |
iOS
Find out more about Dunkers
SEE COMMENTS

PGC Helsinki 2016: New characters and random events are coming to Dunkers this Thursday