[Update] Micro Machines sticks it in fifth gear and speeds out onto iOS, out now

Updated 15th July 12:00 PM: We'll pretend it's the 14th today and say that Micro Machines is now officially out on iOS. Woohoo!

With plenty of mileage to be had, pick it up for free on iTunes right now.

Be still the heart of the 80s and 90s kids, it was announced over the weekend that the classic car racing/battler Micro Machines is coming out of soft launch and getting released globally on iOS this Thursday. 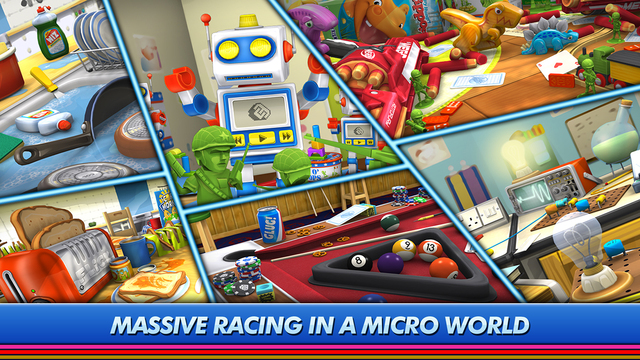 For our younger whipper-snapper readers you might not get the tingle of nostalgia running through your bones, but before Mario Party was there to ruin friendships we had the likes of Micro Machines.

For those who don't know, Micro Machines is a top-down racing simulator with miniature vehicles (hence the title) where you have to race across a series of unconventional tracks, such as a breakfast table or a billiards table. In the iOS version however it introduces features such as Nerf battles, worldwide multiplayer, defensive or offensive car upgrades, and much more.

After what feels like a lifetime, Micro Machines will be launching globally on iOS this Thursday 14th July so watch this space. We'll let you know the moment it drops on iTunes.