Neo Turf Masters - A faithful recreation, for better or worse

Neo Turf Masters is an almost untouched port of the SNK arcade golf title from the mid-nineties, and that's both the game's biggest strength and weakness.

Back in 1996 this was one of the best golf titles available, and as the sub-genre hasn't moved on that much since - flashy visuals and occasional failed gimmick aside - it's still a lot of fun to play.

The crisp and clear aesthetics are hugely appealing, but it's the sturdiness of the core gameplay mechanics that impresses the most.

Shots are made by making taps on various parts of the screen which allow you select your club, stance, shot direction, and then the altitude and power of your swing. Everything is easy to get to grips with, and you'll likely start making pars and birdies inmere minutes.

Some of the later holes (across the four courses available in the game) are hugely unforgiving in terms of their design though, and prey on the player who isn't focused on every factor - such as wind direction, the club used, or the grain of the putting green. 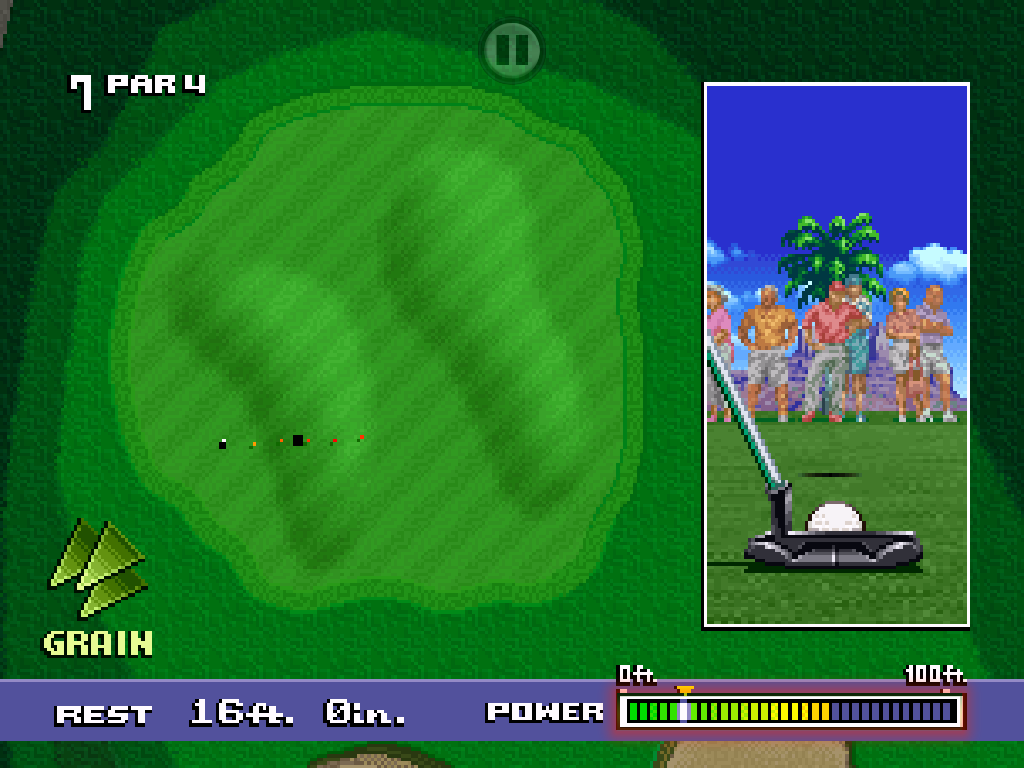 The fundamentals are rock solid, but it's perhaps disappointing that it isn't a bit more ambitious. DotEmu have a mixed track record when it comes to its ports of older titles, and it has clearly followed the 'if it's not broke don't fix it' mantra here.

The additions that have been made to the original are welcome but far from earth shattering – such as a pass and play multiplayer mode, an auto save feature, adjustable difficulty settings, and MFi controller support.

The option to add a backspin effect on your shot by swiping down on the touchscreen is about adventurous as things get – you get no new content, just the four courses from the arcade original.

This is a solid port of Neo Turf Masters, and subsequently makes par comfortably - but it doesn't have the confidence to go for that tricky birdie putt and make itself an essential purchase.

If you're after a faithful port of a classic golf game Neo Turf Masters won't let you down – just don't go in expecting it to dazzle or surprise
By Simon Reed
| Jul 5, 2016 |
iOS + Android
Find out more about NEO TURF MASTERS

How to tune your car in CSR Racing 2 - tires, nitro, and final drive