Elsword: Evolution Part 5 - How does it compare and how does it play?

We're going to try something a little bit different with our review of Elsword: Evolution. Instead of just bashing out a score right here and now, we're going to take our time, coming back to the game every few days to let you know how we're getting on.

It's part diary, part review, part comparison to the other casual MMOs on the App Store. And obviously it's going to be brilliant and you should come back as often as you can to see if we've written anything else. Promise? 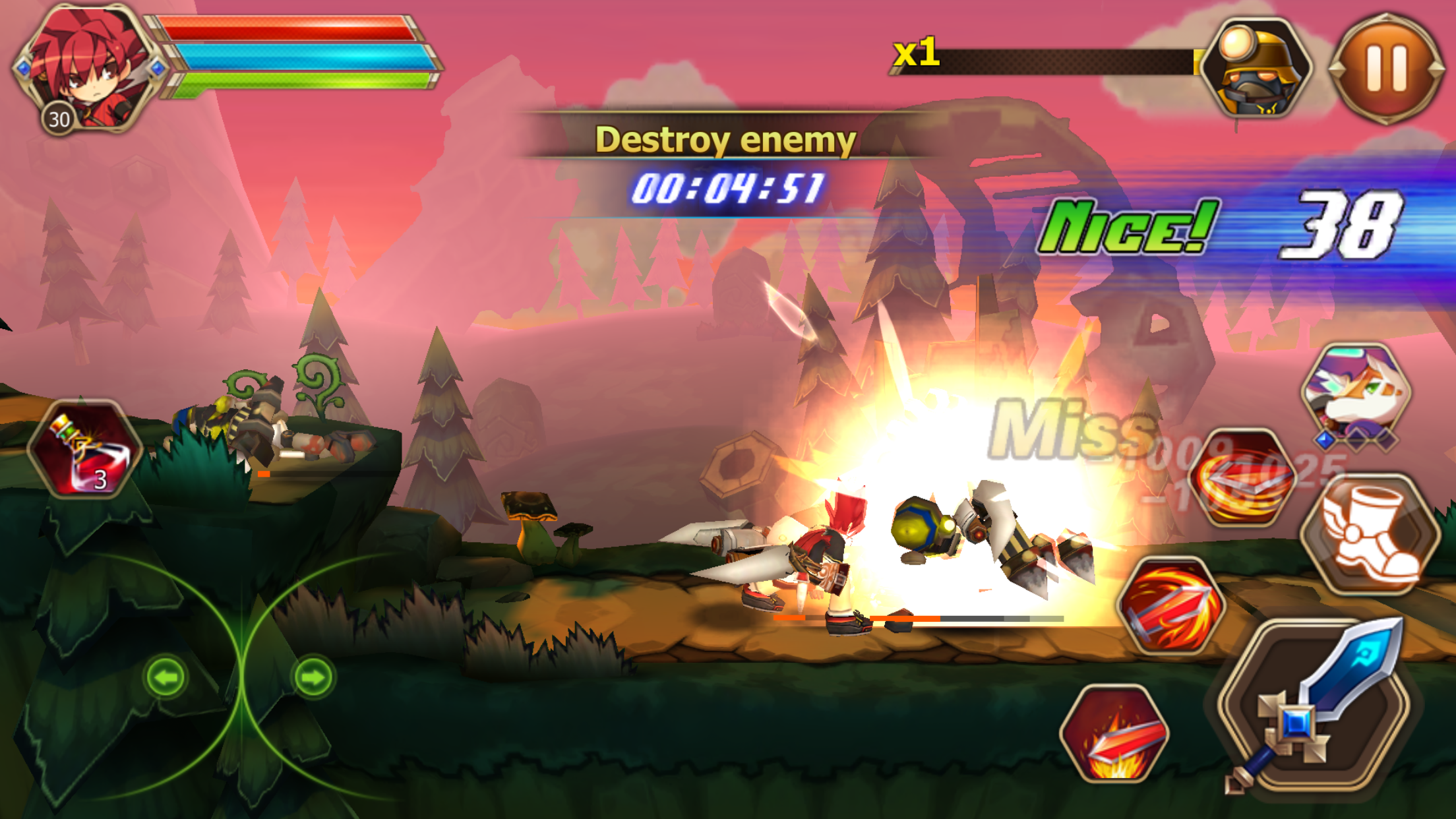 It's gotten to the point now where every time I load up Elsword I spend a good ten minutes tapping on things to collect what I've earned while I've been away.

I get some fruit from the magic tree and then spend it to go on raids. Then I sell the gear I get from the raids because it's all junk and I don't need any of it.

Then I worry if I should have sold all of the junk or whether I'm missing some crucial aspect of the game that would make it more entertaining.

There's an ice-shaving machine, so I shave some ice and get given some gems. I check my messages, and most of them are telling me I've been attacked but it was unsuccessful. Which I think means I was unsuccessful, even though I wasn't there. 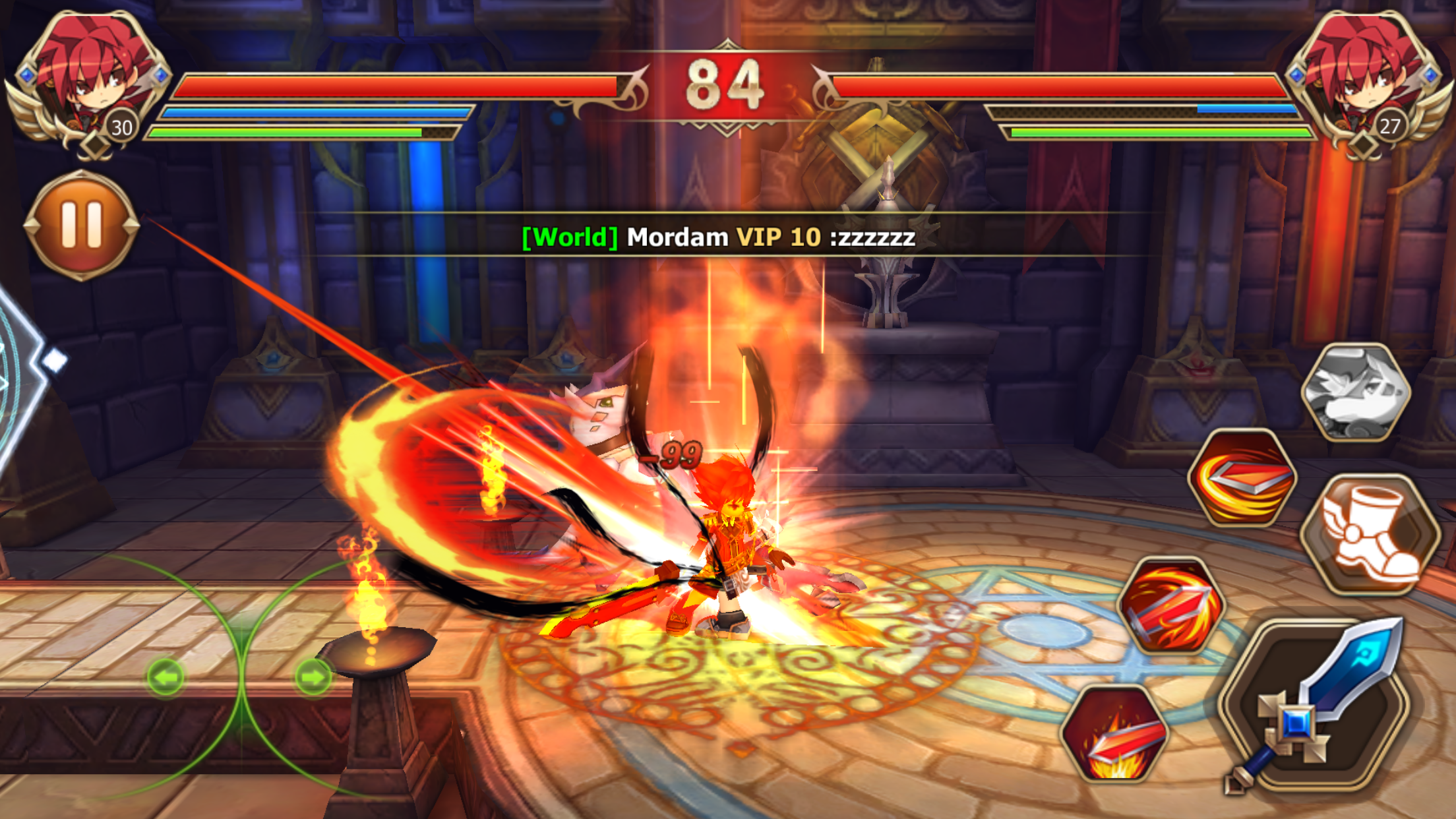 So much of the lustre has faded from the game now. Sure, it still looks nice, but more often than not in scraps now I just set it to automatic and sit back and watch my little spiky man wave his sword about.

If I could figure out a way to spend money to make the game more enjoyable then I would, but I honestly can't. I'd like better equipment, but figuring out where to get it from has left me confused and scared.

I'll be honest diary, I think my time with Elsword is coming to an end. I'll play some more over the weekend and report back on Monday, but right now I don't feel like I'm playing a game so much as navigating a hi-res version of Ceefax. 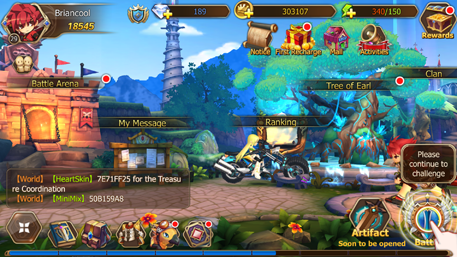 Progress is starting to slow now. I'm level 29, and I'm coming to terms with the fact that there's a very real chance I'm never going to understand what's going on in this game.

Sometimes I see people riding around on souped up motorbikes. They appear for a moment, then disappear. I sort of feel like it's a metaphor for the rest of what's going on in Elsword.

A big flashy thing happens, you go oooh, and then it's gone and you're not entirely sure whether it was anything to do with you or if it would have happened if you weren't anywhere near your mobile.

I'm still unlocking new things, but while the menus and rewards are different, I'm still doing the same thing - pushing buttons and hoping the stuff around me dies before I do.

I mean yes, the numbers are still going up, all be it much slower than they once were, but I don't feel like my character has changed at all. 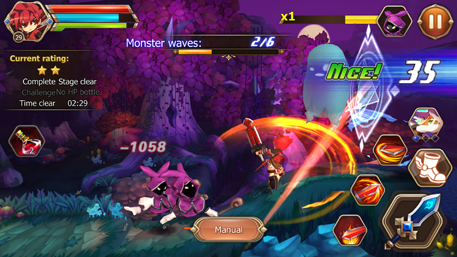 And any time I come up against someone else's character in one of the versus modes, I get my arse handed to me, sliced up on a platter emblazoned with the words “do you even Elsword brah!?!”

To be honest, I'm starting to think I don't. The vagaries in the game are slowly but surely grinding me down. Yes, it's still lovely to look at, but I'm desperate to get that original spark back, and the game seems desperate to just confuse me.

Maybe at the next update I'll have found some purchase in these menus and sub-menus and poorly translated explanations. But fear not dear diary, whatever happens, you'll be the first to know. 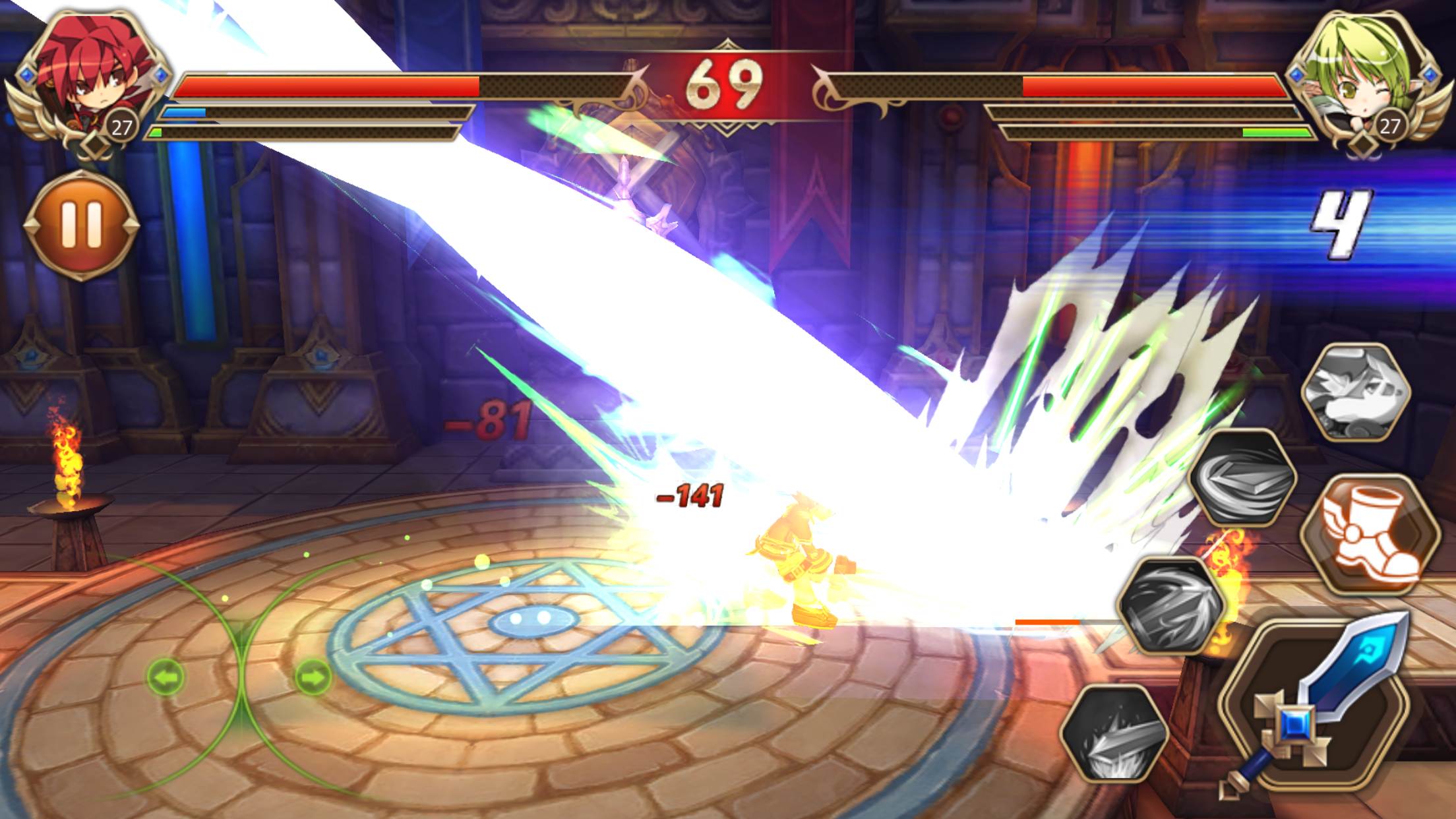 I'm now level 27. It has been some ride. Although I'm still not entirely sure I've had all that much to do with it. I have started dying now though, which is oddly refreshing.

Pretty much every time you level up you unlock a new feature of the game. So now I can fight other player's characters, engage in bonus dungeons to up my stats and coins, and replay completed levels without actually playing them.

I've upgraded my angry donkey to turn it into an even angrier donkey, and I think I'm starting to get to grips with what all of the menus mean and what all of the buttons do.

The translation is still awful though. I've pretty much stopped reading things and now I just guess what's happening and hope for the best. It's doing pretty well for me so far. 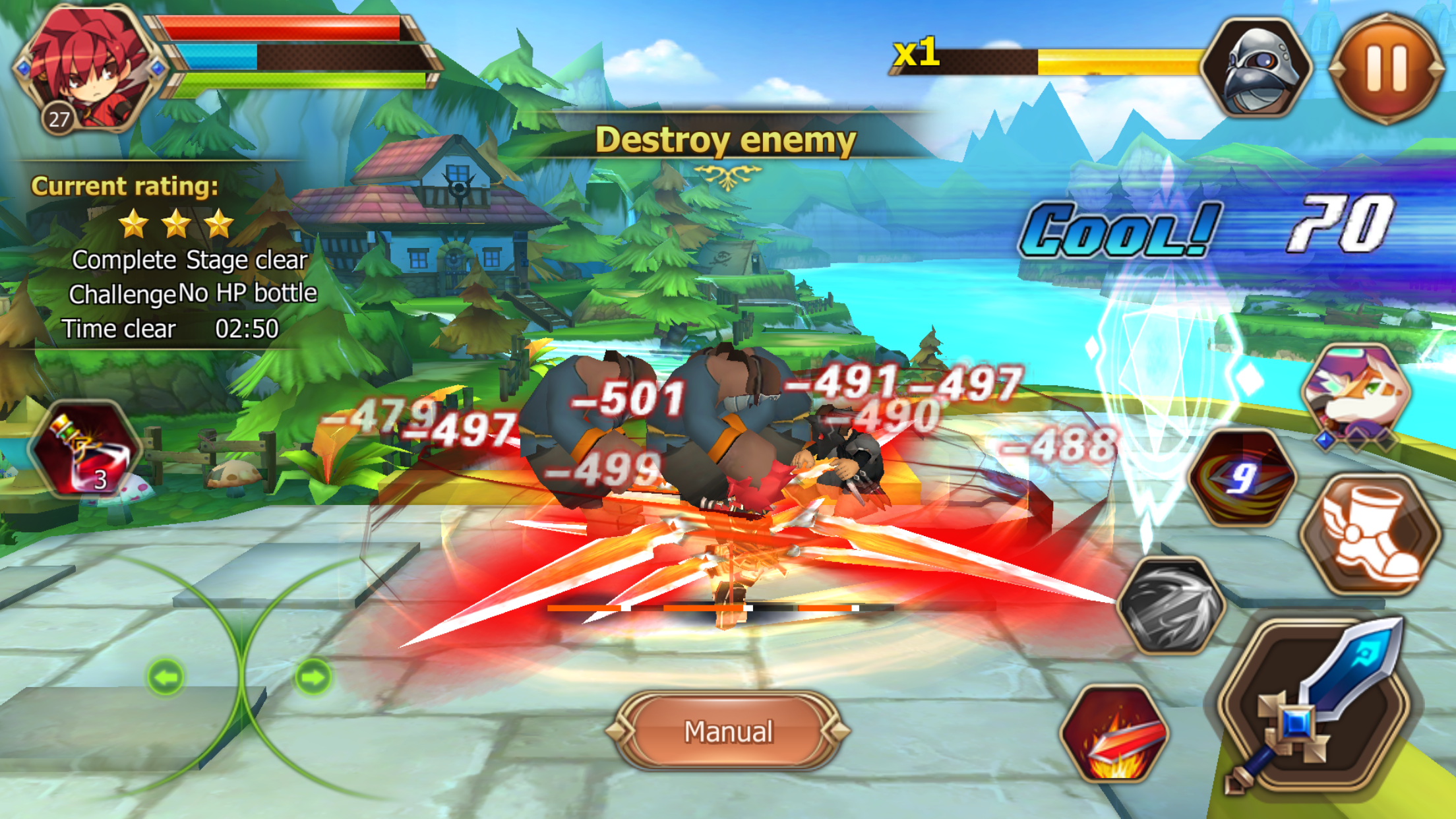 I can join a clan now, which I'm in the process of doing, and add other players as friends. Everything you do in Elsword is designed to push your numbers up - more loot, more stats, more spiky hair. Probably not the hair thing actually.

The combat is still really satisfying, especially now it's a little more challenging. A dodge button wouldn't go amiss, but jumping out of the way of attacks and smashing a boss in the spine is an awful lot of fun all the same.

And the fact I keep discovering new things means I'm jumping in for a couple of hours each day. My spinny attack is now even more spinny and spiky than when I first got it, and I want to see how my other special moves fare when they're upgraded.

Hopefully things will get even clearer as I smash through even more of the game, and of course dear diary, you'll be the first to know. 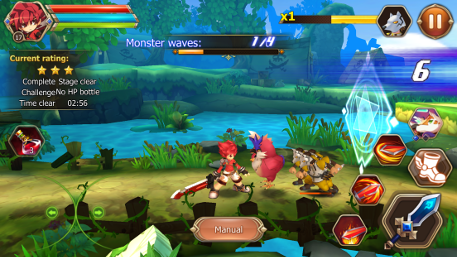 I've been playing Elsword: Evolution for a couple of hours now, and I have to say I've been enjoying myself. I know, I know, I'm surprised as well, but bear with me.

This isn't your average casual MMO, it's got a spark to it, a fizz and a whistle that makes you want to delve into its dungeons and figure out what all of its weird menus are for. And it's got buttons to push. I love pushing button.

That said, I'm yet to get to the MMO meat of the game really - I'm currently slashing and jumping my way through the first chunk of quests on my own. I'm called Briancool, and I'm level 15 and have red spiky hair. Just like real life!

The game has pretty much been ferrying me through everything so far, telling me when to tap on things and then pushing me out to fight. 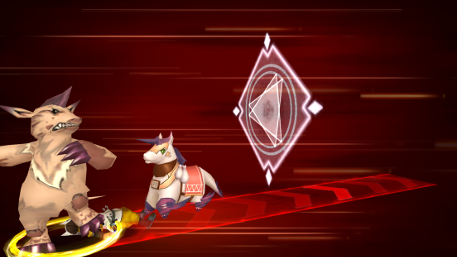 The controls are pretty good. You've got a sliding d-pad that lets you move around, and a bunch of well-spaced buttons for hacking, slashing, and leaping about like a lunatic.

I've got a pet, which looks like an angry donkey and works like a single-use summon, and I've got three rechargeable sword skills that let me dish out massive damage to multiple enemies.

I get the feeling the game deals more with the illusion of skill than any actual skill at the moment, but it's still nice chopping big monkeys up with a sword and then getting some extra numbers for it.

Right now the game's definitely more interactive than the likes of Blood Brothers, and there's a level of polish that makes the whole thing sparkle.

Well, apart from the translation, which is at best hilarious and at worst complete gibberish. Ah well, I shall persevere dear diary, and report back with more findings in a couple of days.

Check out some of our best articles about Elsword: Evolution:

Which version of Elsword is better: PC or mobile?

Elsword: Evolution classes - which one to pick, and how to change it