Blasting baddies with a buddy

I played this zombie-blasting shooter at Paris Games Week last year and was pleasantly surprised to see how VR could elevate a simple shooter into something so involving, visceral, and scary.

But at GDC, I got to take on zombies with a partner. One of the developers of the game also donned an HTC Vive headset and joined me in the game so we could work together to take down waves upon waves of flesh-eating monsters.

Okay, so in reality my partner was just a floating head and two floating hands. Not the most realistic representation of a human being. But it still worked - the first thing I did when I saw him appear in the world was wave - and he waved back.

It just felt so natural. Better than typing out a message, saying "hi" into a microphone, or pressing a button to emote. I just waved. Hello!

Anyway, enough frivolity. It was time to grab a gun, so my partner picked one up and threw it across the table to me. Again, it felt ever so natural to pluck the gun out of the air. VR quite quickly tricks your brain into thinking that this stuff's real. 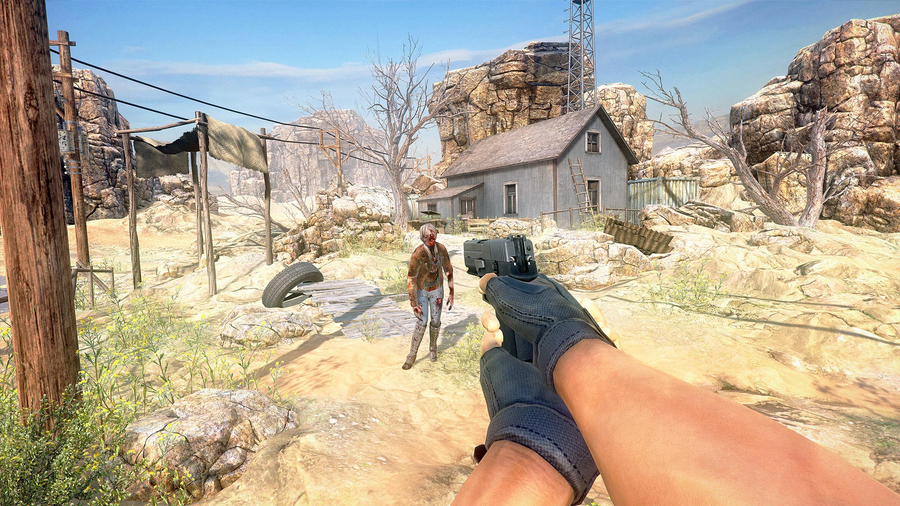 From there, the game was pretty much the same as before but this time zombies would come from multiple directions and we'd shout out warnings and directions to each other, save each other's asses, and even throw clips of ammo at each other.

The clips, by the way, are stored on a belt on your chest. To reload you press a button to release the current clip, then slam the gun into your chest to slot in the next round of bullets. Again, natural.

As the game went on, we got better guns - a magnum and an uzi - and eventually flares to help see in the dark and distract zombies. Also, I found some tennis balls and tried to juggle in VR for a while. It kinda worked.

Playing Arizona Sunshine in cooperative mode proved to me that VR is not just about slipping on a mask, and ducking into a dark, isolated world.

The multiplayer aspect shows enormous promise for games where friends thousands of miles apart can get together in the same space and truly interact - not just through voice or text but body language and gestures.

And any game where you can throw objects between each other, or work together on a puzzle, or share responsibilities in some way will be amazing social experiences.

The game will be out for all major VR headsets, including PlayStation VR, in 2016.

Miitomo - To Miitomo to Youtomo