What does the future have in store for VR?

As part of GDC 2016’s extensive range of dedicated Virtual Reality talks, most were focused on the here and now.

This is to be expected given that not only is VR relatively new to the industry, but also because a lot of developers are trying to learn how to best utilise VR technology.

However, within all these talks there was one man who wasn’t there to talk about the current state of VR.

That man is Jesse Schell, a distinguished Professor who has spent most of his life researching and working with Virtual Reality.

He’s also the developer behind the upcoming VR puzzle title I Expect You To Die, a game I had a chance to play after meeting with Schell at GDC, and was very impressed with.

As such Schell is extremely well placed to look at the long term future for Virtual Reality. In fact, he’s been doing it for most of his career.

So, given that VR will officially be released to the mass market this year, how does he see the technology advancing in the next ten years?

Well, as part of his talk at GDC, he made the following 40 predictions for what VR and AR will look like in 2026. All of which make for some very interesting reading.

01 - Starting in 2016 VR headsets will be in the consumer market permanently. 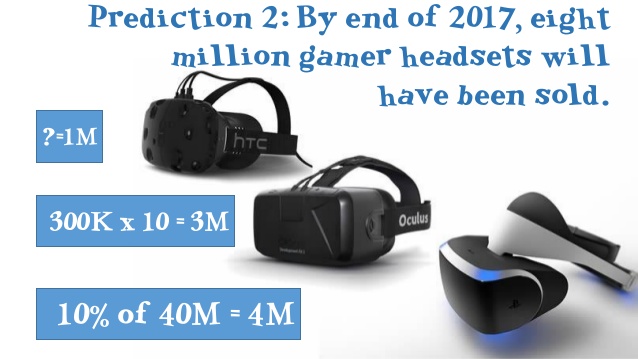 03 - In general, there will be four mobile headsets for each gamer.

04 - Headset sales will double each year until saturation is reached. 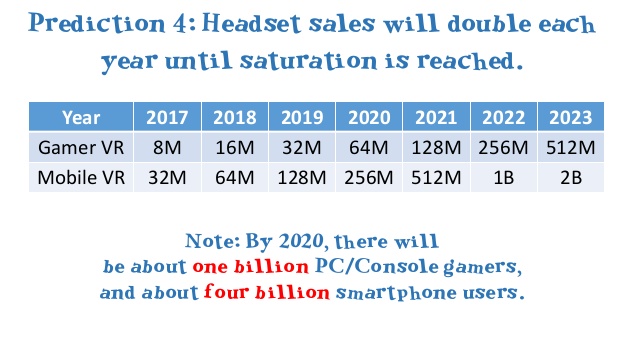 07 - By 2022, the majority of VR revenue will be spent on Portable, self-contained VR systems that are not phones.

15 - Documentaries will be the first VR films to win major awards.

This is because documentaries look to put you inside the event, and this can be very powerful once the experience is delivered through VR.

18 - The Divine comedy will provide a model for successful VR storytelling.

This is because within The Divine Comedy the main character doesn’t travel alone, but rather has a guide in Virgil.

As such, the idea of having another person both guide you through the experience, and consequently help frame the story, is argued by Schell to be vital tool fro storytelling within VR.

21 - By 2025, the majority of VR revenue will be from social experience. School argues this is no different to how it has always been within the gaming industry.

This is in opposition to free to play MMOs which Schell argues don’t work in VR as they pull you out of the immersive experience that VR is.

28 - By 2020 there will be at least 20 VR coasters worldwide. Interestingly, this one has actually already come true, with there currently being 24 VR coasters in existence.

29 - By 2025 bowling with AR glasses will be a thing. The bowling will be real, but what is going on around you will be displayed through augmented reality.

30 - By 2025, the AR market will be dominated by “video AR” systems similar to the Vrvana Totem and Google Tango.

31 - AR experiences synced with your TV will be a thing.

32 - Augmented Reality lectures will be popular. by 2025, and will be a very powerful tool for teaching.

33 - By 2025, chasing phantoms in your house will be mainly for children only.

34 - By 2018, games will wear narrow glasses or contact lenses so that they are better compatible with VR headsets. As such fashion will change due to the influence of VR.

35 - By 2020, really hardcore gamers will have prescription lenses for their VR headsets. 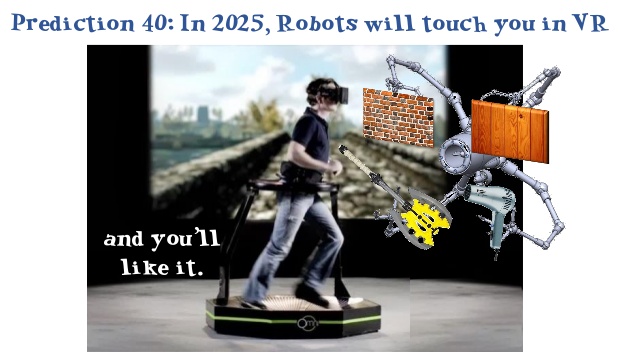 All in all, whilst some of these may be daring, most are in fact very believable.

VR is set to be one of the most exciting pieces of technology the mass market has seen for a long time, and it’s quite hard to argue with many of these predictions.

In fact, it’s impossible to argue with one, given that prediction 28 has already come true.

Nevertheless, what do you think? How many of these do you think will come true? Why not give us some of your predictions in the comments section below.