Mobile gamers might know Ron Gilbert for games like The Big Big Castle! and Scurvy Scallywags, but his real claim to fame is genre-defining point and click adventures like Monkey Island and Maniac Mansion.

And you'll sense a lot of those games in Thimbleweed Park - a classic point and click adventure complete with multiple playable characters (a Maniac staple), chunky verbs, and loopy logic puzzles.

The game is set in a Twin Peaks-style town of oddball weirdos, and kicks off with a pair of secret agents investigating a dead body. From there the game introduces supernatural elements and mysterious, erm,mysteries.

While you start out with two characters to swap between, there will be five playable characters in total including an asshole insult-comic clown and a ghost. 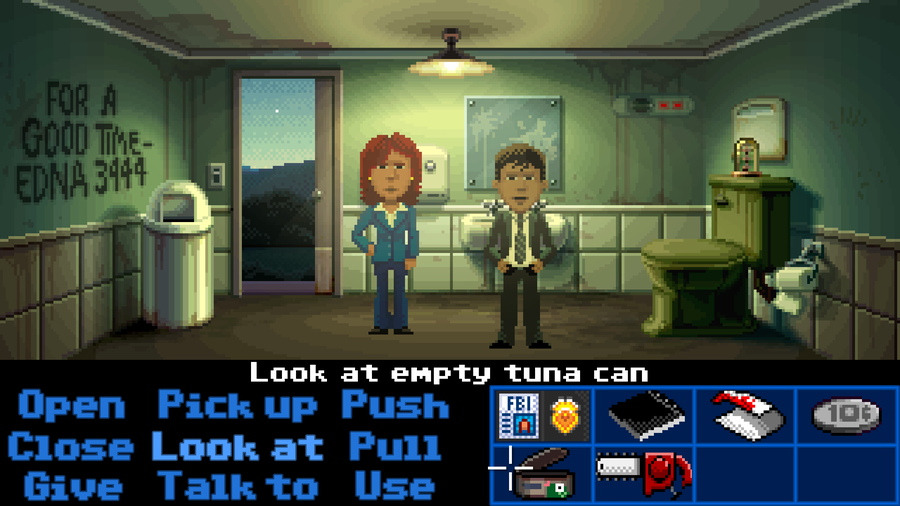 Some puzzles will need a certain character and their specific skills (one's a computer hacker, another can phase through locked doors) to solve 'em, but generally you'll be able to play as whichever character you like the most. And you'll find out lots about the characters and their backstories in a series of cute playable flashbacks.

Thimbleweed Park takes place in a rather large environment, with over 100 screens to explore, which should give the player plenty of freedom in exploring the land. But Gilbert and co intend to focus the player with hints and suggestions to encourage them to go the right way. It's all part of Ron's -plan to fix what he sees as on-rails and linear adventures.

He also hopes to keep the puzzles logical and grounded (solving one should make you say "ah, that makes sense", instead of "oh come on, how was I supposed to figure that out"?). But don't expect a traditional hint system - instead, clues will be hidden in conversations with the town's cast of wacky characters.

Thimbleweed Park will be out in late 2016 (early 2017 at a push) on PC, with iOS and Android editions to follow. That mobile version should have touch friendly controls with more dragging and swiping than pointing and tapping.