Getting the edge when things get edgy

Clash Royale does an incredible job of shoving an awful lot of competing priorities into one three-minute package.

So while it's still fun and accessible, it's also easy to lose some of the nuanced strategy in the mad rush to attack and defend the towers.

You'll get there with practice, of course, or by watching high ranking matches on TV Royale.

But it's more fun, and more effective, if you know the ropes upfront. So here's some tips and tricks we've learned after hours in the arena to speed up your ladder ranking.

Victory in Clash Royale is ultimately determined by who makes the most efficient use of their elixir. Both sides get the same amount, so the winner is usually the person who has units left on the field once equal elixir has been spent.

That makes countering enemy plays of paramount importance. You need to know the most common threats you're going to face and the best way of stopping them, leaving you with units to play with. 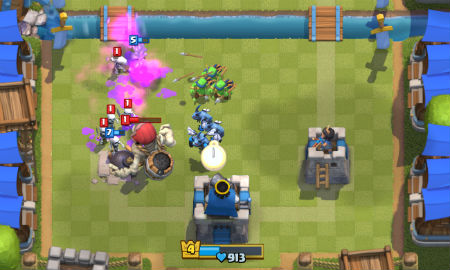 There's no better example of this than the Prince vs the Tombstone. Our royal hero costs 5 elixir, and will smash almost any single target once he gets a running start.

Drop a 3 elixir tombstone in front of him and he'll destroy it. Which then releases four skeletons that will destroy him. Net gain of 2 elixir to the necromantic player and, with luck, a couple of skeletons left on the board too.

Broad classes of counterplay are easy to spot. Splash damage versus cards that summon hoards of creatures. Flying units against melee ones. The real skill comes in starting to learn exactly what the best counter to each card is.

Baby Dragons, for example, are very powerful. They're immune to ground attacks but their fireball breath is capable of wiping out the majority of early missile and flying units on your roster.

The most effective counter is therefore the musketeer, who can deal and take enough punishment to shoot down the dragon before succumbing herself.

Speed is amongst the more important stats that your troops have. Some move and deploy much faster than others. You can learn to leverage this to your advantage.

Take slow, hard hitting units like the P.E.K.K.A. or the Giant. If you spawn one of these right at the back of the field, they'll start to slowly trundle forward.

That does give your enemy plenty of time to react with an appropriate counter. But it also gives you time to gather elixir and support your offensive play with a gathering snowball of troops.

Where and when you place your units on the field turns out to be almost as important as what you choose to summon.

When you're in a panic trying to head off an attack it's easy, for instance, to drop your emergency spear goblins right in the midst of the fray. 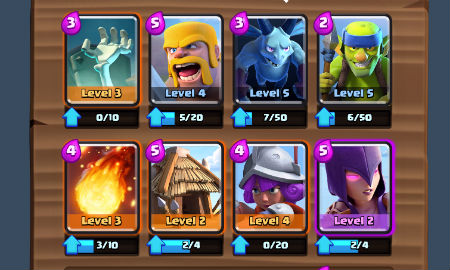 That's a bad idea. As squishy missile troops, you want to keep them slightly away from the melee, but just within spear range to maximise their damage output.

You can also use their squishiness as a speed bump to slow units bearing down on your keeps. So the ideal placement for a fracas around the bridge is just in front of the tower you're defending.

A similar logic applies to unit-generating huts. Early in the game you want them behind your towers to maximise their output.

However they also make quite effective crash mats to distract and divert incoming attacks. The tombstone is particularly good for this since it releases skeletons when destroyed.

Placing them in front of your keep can thus sometimes be a good idea. There are even moments when it can be sensible to drop them right in front of a bridge. It disrupts the movement of enemies across the bridge and saves you from splash damage aimed at your towers.

It's also sometimes a good idea to build in the middle of your side of the field, slightly back from the river. This is especially true of defensive emplacements like cannons and crossbows. They can then defend both lanes, and attackers have to walk the maximum distance to take them out.

One of the first tips you'll pick up in Clash Royale is to make your opening play late. That way you can use a full elixir meter to put down some mutually supporting troops.

Or, if your enemy plays first, you can see what it is and counter it with the most effective option.

However, you don't want to waste elixir once your meter is full, either. 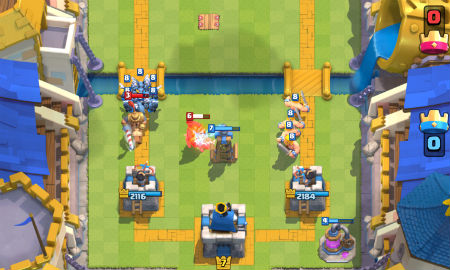 In this situation, one of the best options is to spawn a cheap group unit, like skeletons or goblins, behind your crown tower. They split and follow their own paths, a few up each lane.

While splitting your offence is normally a bad idea, early in the game it'll leave you opponent unsure of where to defend.

So, when they've committed to one lane, you can use your remaining elixir to throw a solid offence down the other lane. With luck, they'll be out of resources to counter it.

Another useful trick is to sometimes hold a powerful card in reserve until the late game. If you spent most of the match not seeing a giant, it's reasonable to assume your enemy doesn't have one and play accordingly. Then, when those big footsteps hit the field, it's too late to do much about it.

Any big unit can be used like this, as can splash damage spells, to encourage your opponent to think they're safe clustering lots of units together.