Why Clash Royale is the mobile mini-MOBA for me

Just after Christmas I spent the whole night in a room with four friends, five computers, and a crate of beer.

They were all DotA addicts, with about ten thousand hours logged between them, and they'd promised me I'd be playing like a pro before the morning.

What actually happened was that I drank a lot of beer, got used as bait continuously, and was repeatedly mocked as new fish by the opposition. It was a disaster. Except for the beer, obviously.

So continued my laborious progress along the MOBA mile. See, these things ought to be my bread and butter. I love strategy and role-playing games. I particularly enjoy ones that combine rich strategy with a limited amount of twitch-based skill.

I used to regularly log hundreds of hours on solo RTS games. I couldn't be much more of the target audience for a MOBA if I tried.

Yet so far, they've all defeated me. DotA and League of Legends felt like they didn't so much have learning curves as learning cliffs. Cliffs that I just ran headlong into before sprawling unconscious on the sand.

Even now, with the benefit of having good friends who are DotA addicts to help me learn, it's still beyond me how anyone becomes proficient in this sprawling plethora of classes, items, and abilities.

Enter the mobile MOBA. I've had the pleasure of putting in review hours for the top two contenders for the mobile MOBA crown, Vainglory and The Witcher Battle Arena. I had high hopes for both, presuming they'd be cut down in terms of options and play time for the platform.

Vainglory was, but not by much. Matches still took half an hour to complete. And the designers seemed to have presumed that their target audience was already familiar with other MOBA games.

Without the benefit of voice chat, or much in the way of online strategy discussion, it was a difficult place for new players to find their feet. 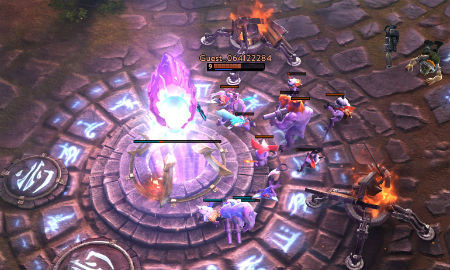 That problem has gone now, smoothed away by the passage of time. But there's still a lot for new players to learn. And having been burnt once, I didn't fancy trying it again.

The Witcher Battle Arena was better. Games there lasted about ten minutes, controls were simple, and the roster of characters was much smaller. It was easy to get in to, exciting to play, and I enjoyed my time with it.

Long term, it didn't turn out to be a keeper. The lack of options and shallow depth meant it eventfully ran out of steam. So I went back to my beloved turn-based games and forgot about the possibility of a palmtop MOBA.

Until Clash Royale slapped me round the face with a wet goblin.

Honestly, I find it hard to think of a combination of things that could turn me off a game harder than those boasted by Clash Royale.

It's free to play. It's from big name and big bucks developer Supercell. It's based on their ever-conquering, ever-marketed and ever-tiresome Clash of Clans franchise. The moment I laid eyes on it, I wanted to hate it with a pure, fierce rage.

Yet it grabbed me by the short and curlies right away.

In contrast to almost all of its peers, what you do and how you do it is obvious right away. You need to push more (and more effective) troops down one of two lanes and try to take out as many of the enemy's three castles as quickly as possible.

You just drag and drop onto the screen to activate. It's so simple that even the short tutorials you have to play through before being allowed to head online seem absurdly excessive. 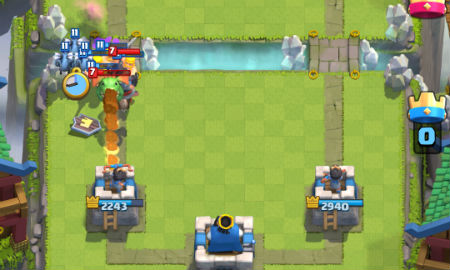 Better yet, though, is that once you do, and once you start failing against more experienced opponents, you'll be able to figure out why.

Unencumbered by vast purchase or upgrade trees, you can focus on what you did wrong and what you can do better next time.

That's a neat positive reinforcement loop right there. Combine it with another, in the form of unlockable and upgradable cards, and you've got something dangerously addictive on your hands.

Dangerous enough to push me straight through the regrettable and needless soft paywall and out into the dangerous world of clans and ladder climbing.

For all that simplicity and all those addictive qualities, Clash Royale actually has a fair amount of depth to it. Certainly enough that skill is the deciding factor in games between people with roughly equal troops at their disposal.

It's all about using the right counters at the right time. If your enemy is threatening to swarm you with cheap, weak troops, you need to drop splash damage on them.

Heavy hitting ground units are vulnerable to flying ones. Big, lumbering monsters can be slowed and eventually taken down by swarms of cheap, weak troops.

The principle is simple. In practice there's just enough variation on offer to make choices non-obvious, especially when they have to be taken at speed, on a crowded board, and from a semi-random selection of the cards in your deck. 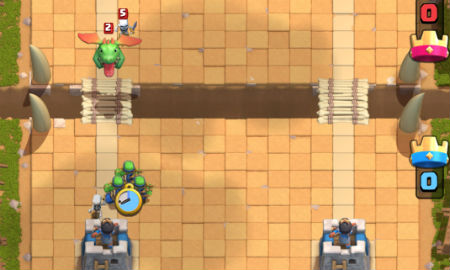 It's also clever in the sense that the constant need to counter and think on your feet rewards practice and mastery. You might not have as much to learn as in a bigger MOBA, but you'll still be richly rewarded for taking the time to think and study.

Short yet strategic, accessible yet arduous it crams everything I could want from a MOBA into a small but perfectly formed package.

With games lasting a maximum of a few minutes, it feels like each offers an impressive workout for both your fingers and your brain.

And it's so quick you can step right back in and use what you've learned or what you've upgraded to improve your chances in the next match.