The year has turned, like some bleak, wriggling worm, extending in a loop forever, its blind eyes unable to even perceive what it is, let alone what it does.

But that doesn't mean that we're condemned to repeat ourselves, so let's look at the ten best iPhone and iPad games that came out in December 2015.

They're all pretty good, although two of them didn't actually come out in December. We reviewed them in December though, so that basically counts. And I don't care if you disagree.

So here they are, in some sort of order. If you have your own suggestions, throw them with aplomb into the comments at the bottom of the article.

Grayout
By Neven Mrgan - buy on iPhone and iPad

Grayout came as a bit of a shock. A prequel to the excellent Blackbar, it's another game that deals with language, power, and control.

It's a complex, often hard to play puzzler about creating sentences out of a jumble of words. Sometimes it's infuriating, sometimes it's harrowing, but at all times it's an incredible and unique experience.

You'll shout at your iOS device and you'll pull out your hair, but there are few games that give you a such an empathetic glimpse into a situation you'll hopefully never find yourself in. A must play.

Rayman Adventures
By Ubisoft - download on iPhone and iPad

While it might not quite have the sparkle of its predecessors, thanks in part to a new free to play system, Rayman Adventures is still an impressive and entertaining platformer.

It looks gorgeous, as you'd expect, and adds a new direction-change move to the auto-running platformer. There are things to collect, and creatures to aid you in your quest.

Sure it might not be as sharp as the originals, but it's still enjoyable, and you don't have to spend anything to give it a crack.

Badland 2
By Frogmind Games - buy on iPhone and iPad

Another surprise, this time in the shape of a sequel to one of the best looking games on the App Store. This time round though, Badland 2 has as much substance as it does style.

This sequel corrects a lot of the problems of the original, giving you tighter control over the blob you're pushing through the puzzling levels.

And the game is all the better for it. It's entertaining and engaging, as well as challenging. Even if the first game didn't click with you, this one's worth a bash.

Rust Bucket
By Nitrome - buy on iPad and iPhone

After a slight misstep with Gopogo, Nitrome came back swinging with this excellent condensed roguelike.

It's essentially a puzzler, albeit a puzzler full of skulls, traps, and monsters that are trying to put an end to your adventure.

It's brilliant fun, it looks lovely, and it shows that Nitrome isn't just a developer of excellent platform games.

A massive strategy game set in the deep darkness of a universe at war. It's full of options, huge battles, and tactical decisions.

Alongside that depth there's a really interesting story about aliens, expansion, and the struggles of the human race in the future.

It's probably not one for the casual strategy fan, but if you're looking for a heavy tactics game to sink your teeth into then it's perfect.

A beautiful ball-rolling puzzler that's all about building an army of friendly snowpeople. And occasionally sitting on a bench.

It might be a port, but this game feels beautifully at home on touchscreen. And while it has a snowy theme, it'll keep you warm through the winter months.

Power Hover
By Oddrok - buy on iPad and iPhone

A slick hoverboarding sim with some of the best controls I've poked in a while. You carve giant curves through some amazing looking environments, chasing a thief all the while.

The game has a unique style, mixing together elements from other titles to create something that feels fresh. And it plays brilliantly too.

It might be a little on the short side for some, but the time you spend here will be time spent with a big grin on your face.

AirAttack 2
By Art in Games - buy on iPad and iPhone

A fantastical World War 2 shooter that sees you weaving through tightly packed fighters and bombers, trying to blow up everything that moves. And a lot of stuff that doesn't.

It has some of the best explosions you're likely to see for a while, and there's a hell of a lot to do as well.

It might not be historically accurate, or as frantic as some of the more neon-hued shooters on the App Store, but it's still an incredible amount of fun. 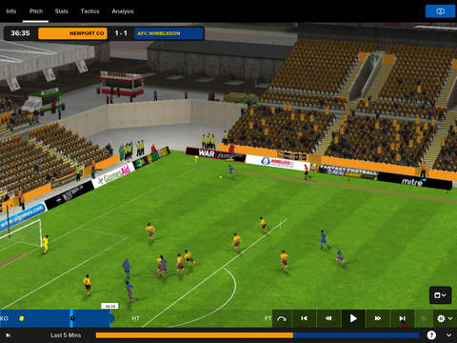 Okay, so this one didn't come out in December, but we missed it in our November round-up. And since the App Store was closed for a week at the end of the year, I think we deserve a break.

If you're a Football Manager fan who's been pining for some in-depth stat juggling on the go, then this is going to scratch that itch. And then some.

There's so much to do here, and while it's only available on tablets it's the closest we've got yet to the full FM experience on mobile.

Skylanders Superchargers
By Activision - download on iPad and iPhone

You could argue that this game came out in November as well, and you'd be right. But what's the point in arguing about things like that, eh? We're all friends here.

It's the full Skylanders experience on tablet. You'll need a load of extra bits and bobs to make it work, like toys and a controller and lord knows what else.

But if you fancy getting all that gumph you'll find a brilliant, Mario Kart esque experience. But with dragons and stuff. I think.

These are the best iPhone and iPad games from October 2015