The suck is strong with these ones

The Star Wars license has been used for some terrific games.

Who can forget blasting Stormtroopers in Dark Forces, making tough decisions in Knights of the Old Republic, and even force-pushing piggies in Angry Birds?

But for every Jedi, there's a Sith. Or whatever. I mean there are bad games as well as good ones. Especially on handheld, where the quality threshold can be as high as an Ewok's shin blade.

So let's look at some games that are about as fun to play as it would be to rub tauntaun dookie in your hair. Unless you're into that sort of thing. I don't know you.

Flight of the Falcon 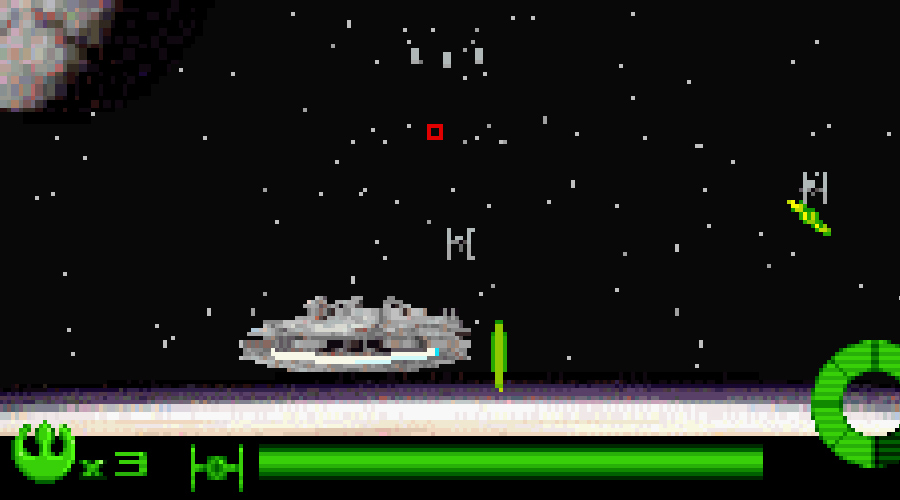 Oh boy, it seemed like such a good idea at the time. A space shooter featuring the Millenium Falcon, as Han and Chewie blast through waves of TIE Fighters and Star Destroyers, What could possibly go wrong?

Well it could be made for the criminally underpowered GBA, turning those epic space duels into a juddering, shambolic mess.

Enemy fighter ships are just dots in the distance, and the nearby planets are so blocky they look like rejected models from LEGO Star Wars.

Buying this game at full price in 2003 would have left you with the level of regret usually reserved for those coming out of Michael Bay movies. 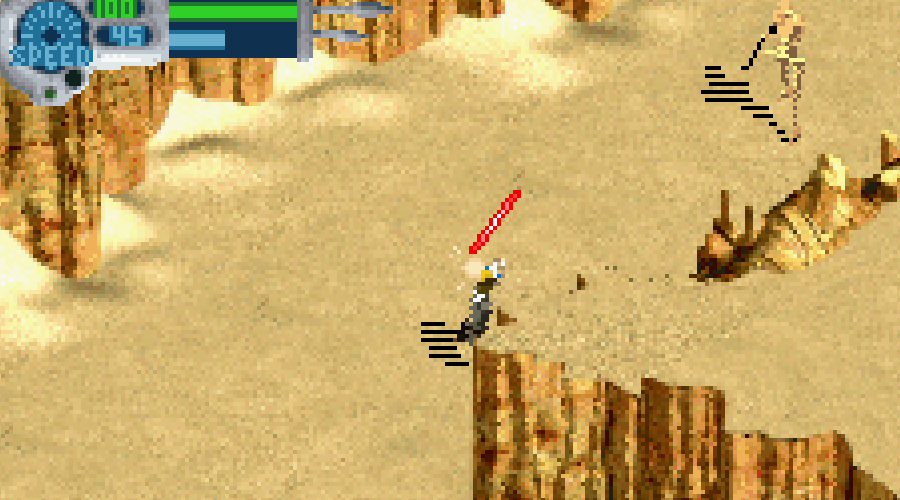 Remember that bit in Star Wars whatever-the-number where Anakin (complete with bleached blonde hair and broom handles for legs) slowly plodded through the desert and wailed on, like, 50 womp rats?

Neither do I, but someone at THQ obviously saw a very different cut to us because that sort of mundane task makes up most of this rancid cash-in. Add in awkward animation and super stiff movement and you've got one crappy game.

At least bouncing laser beams back at enemies is cool. Hard to screw that up. 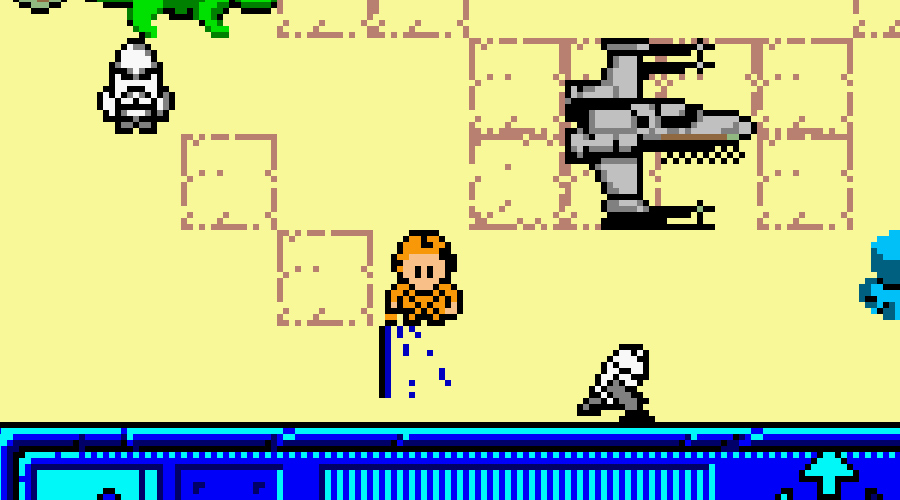 There's a lot to dislike about this game, but the first thing you'll notice is the music. The entire game is scored by an utterly tuneless rendition of the Star Wars theme, which sounds like a drunk has been let loose on a keytar.

If that doesn't turn you off, the migraine-inducing movement (as characters and the screen all shift about in big shuddering grid increments) and the dull as dirt puzzle-solving gameplay certainly will.

Here's a story for you, Yoda: your game blows. 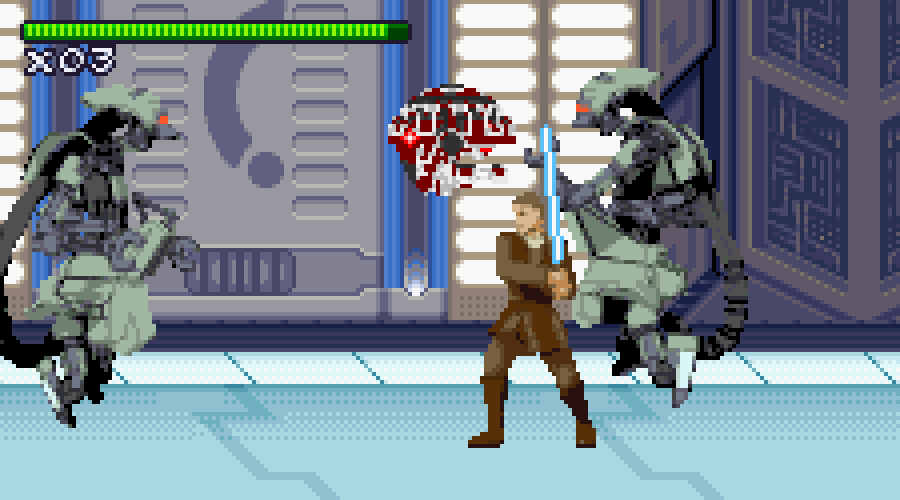 Lots of crappy Star Wars games hit GBA at the height of the prequel trilogy's "popularity". But this one is a stinker of the highest proportion.

You play as Anakin (after he has been hit in the face by a spade) as he takes up half the screen and slowly trudges along endless space-themed corridors.

And he can jump about ten feet high for some reason.

Things go from bad to much worse when enemies appear, and you must faff about with an incredibly imprecise control scheme and a stiff-limbed Skywalker who's about as articulate as a rusted action figure.

If you've forgotten how bad movie tie-ins can be, play this game. It makes Jar Jar Binks seem like a good addition to the Star Wars franchise. 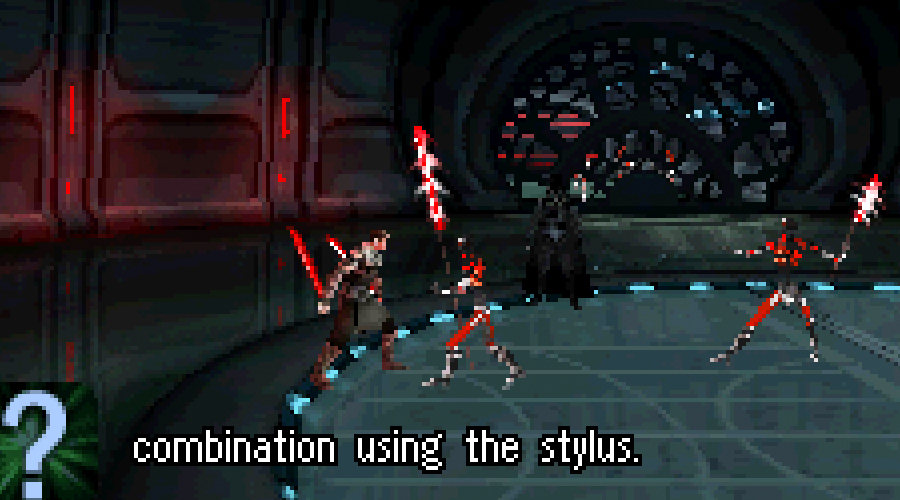 To be truthful, The Force Unleashed II wasn't much cop on console. But it hits a new level of suckitude on DS, thanks to some truly awful controls. Whoever came up with these stylus inputs needs to be tried at The Hague.

But even if you manage to contort your hands into the sort of crab-like shape needed to control the game, you're going to find the world's dumbest and mindless brawler. The sort of game that's so dubious of your intelligence that it tells you what to do at every step.

This is all made so much worse by the fact that the original Force Unleashed was genuinely quite good on DS, with a nuanced control scheme and good level design.