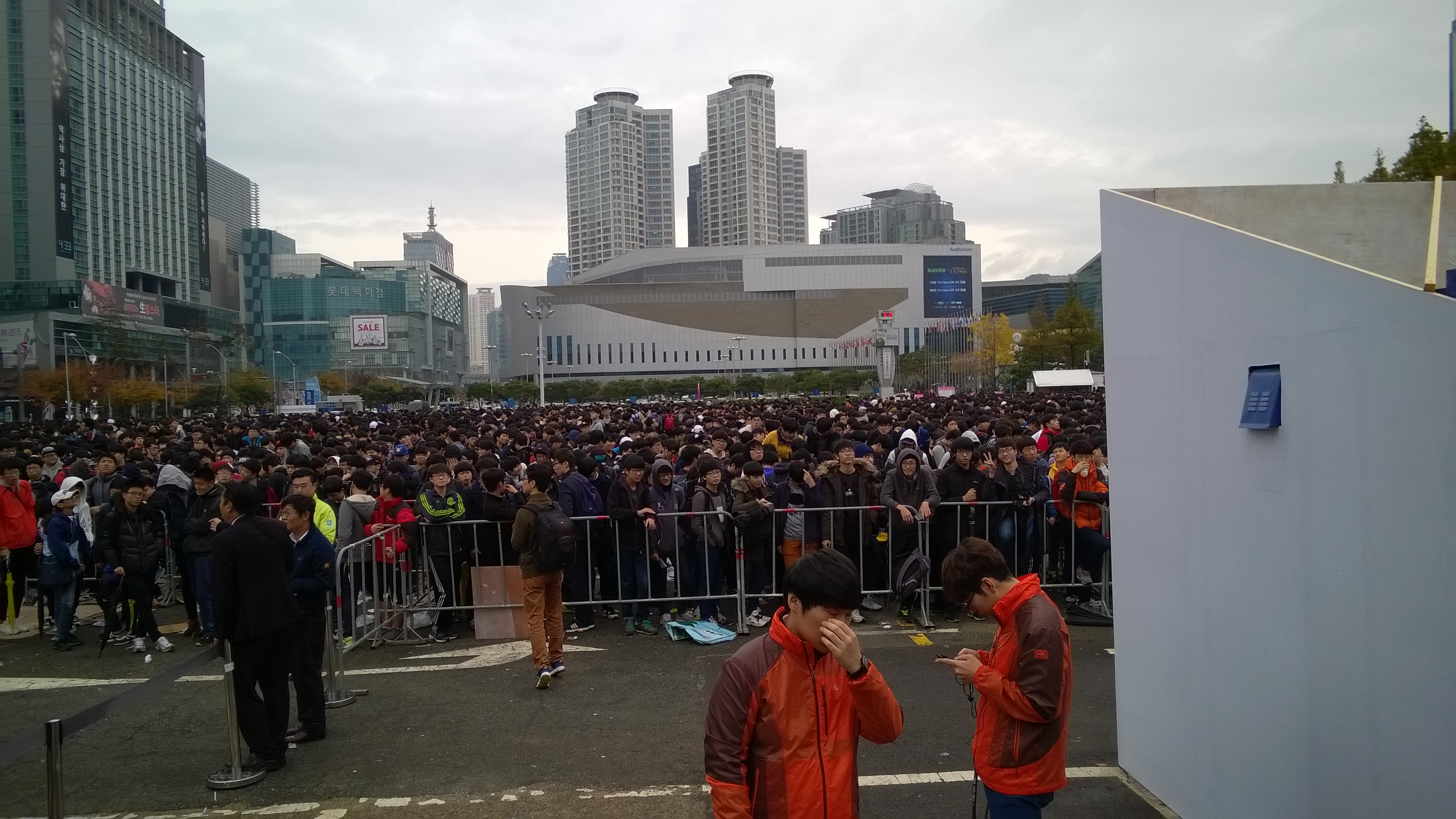 At the far end of the consumer exhibition hall at G-Star 2015 was an expanse of beanbags, thoughtfully provided by the organisers so that the teenagers who had queued overnight in the car park outside the venue had somewhere to sleep through all the fun.

Just next to this slightly tragic spectacle was the BIC Showcase, where the indie games were being displayed around square pillars.

As ever, the indie games were the most interesting ones on the floor, and here are some of the best.

Tap Rising is a casual arcade game in which you have to line yourself up with the gaps in successive rows of pixel-art blocks, before running across them to make them light up in various colours.

It's simple, cute, fun, and out now for iOS and Android.

The aim is to jump from plateau to plateau by tapping on a swinging power meter. The more accurate you are, the more cleanly you despatch the frogs and imps that lie in wait.

It's basically a golf game, but instead of hitting a ball into a hole you're slapping a monster with a fish (other weapons are available) – which makes marginally more sense than real golf when you think about it.

Grid Heroes is a very simple game, and it may even be too simple to sustain your interest, but it's a neat and original idea. The aim is simply to make your way through a succession of 5x5 chessboard grids, collecting pickups and avoiding spiky balls and explosions and other perils.

It's out now on the App Store if you want to check it out.

Curing is a twitch game – a distinction it shares with only about 58,000 other mobile games. It's your job to roll a square left and right, avoiding squares of other colours while collecting same-coloured squares in order to gain points and ascend through the levels.

It's not particularly original, but it's solid enough. Curing is on Google Play for free now, sitting pretty with 18 5-star reviews.

We wrote about Redden when it hit Google Play and the App Store back in June, but then we more or less forgot about it, so it was good to be reminded of it in Korea.

Redden has the spare, artsy aesthetic of Prune, but none of its wimpy pacifism. This is a game about using your device's accelerometer to steer bullets and arrows through environments, around obstacles, across eddies of wind, and into the brainstems of your hapless targets. It's beautiful, stylish, and morally troubling (in a good way).

Developer Dice Creative claims that PooPride is "more fun than a marathon session on the crapper". A representative of that studio was standing by the game's display space in a Lycra bodysuit with a plastic poo on his head. I saw him later at a party elsewhere in Busan, wearing the same outfit.

PooPride is a cheap and cheerful free-to-play racing (technically braking) game with an emphasis on toilet humour over, dare I say it, gameplay.

But that doesn't seem to be doing it any harm: PooPride (full title: PooPride World's Best Poo Game) is on the Google Play store now with a 4.5-star rating.

I have no idea what's happening in Drifting Penguins because there were too many people waiting to play it, though I think it has something to do with keeping an ice floe stable. However, it looks nice, and it's going to be out this week, so remember the name (Drifting Penguins).

Happy&Smile is a souped up port of a ten year old flash game in which you beat up and shoot various animals in the guise of either a cat or a rabbit. The gameplay is very Double Dragon-esque, though you can also jump into vehicles for a bit of extra carnage.

It has a neat noirish visual style, and the controls work well enough, but it's got a very retro early internet vibe and will probably seem hopelessly dated to those of us who were 'surfing' the 'net' a decade ago.

Dino Adventure may look cute, but it's a brute. You have to tend to four dinosaurs in separate mini-games that each occupy a quadrant of the screen, collecting keys and staying alive for as long as you can before your own confusion ultimately destroys you.

It's a good idea, but we'd hope to see a greater variety of mini-games and tighter execution generally before the game goes on sale.

I Was Not Alone - by MAF Games

I Was Not Alone is a bizarre and incoherent combination of Flappy Bird, Thomas Was Alone, and any number of Very Difficult Arcade Games on mobile. Watch the trailer and you'll see what I mean.

Star Chindy isn't the sort of game you can get to know in five minutes, but it looks great from what I saw, with procedurally generated star maps, roguelike permadeath, and FTL-style random encounters, along with single and multiplayer real time strategy elements.

This ambitious genre mash-up is on the Korean Google Play store now with a 4.5-star rating, and I'll be keeping my eyes peeled for an English version.

Circlink is basically Guitar Hero done in the graphical style of Geometry Wars. There's a circle in the middle of the screen with four lines feeding into it. Notes travel along these lines towards the centre and you have to tap them in time to the music (K-pop, of course).

That's it. Hardly original, though the fact that the notes travel in opposing directions is a bracing change from the usual routine. Circlink will be available for iOS and Android.

This one rung a bell when I saw it at the BIC showcase, and after a cursory investigation I have just discovered the reason for this: our own Glen Fox reviewed it for Pocket Gamer back in March.

Typo-esque name notwithstanding, Demong Hunter is a solid action RPG, with decent presentation. The gameplay is arena-based, and that means it gets repetitive after a while, but it's certainly worth trying out for free.