No, really, it's nothing to sniff at. It adds a bunch of new levels in "Overtime Mode."

As the name suggests these levels are for people who have completed the main game. They're a bit tougher and have their own story to follow along.

There's nothing new in the levels to discover. They're more like remixes of the same ideas. But hey, more Kero Blaster is no bad thing, right? 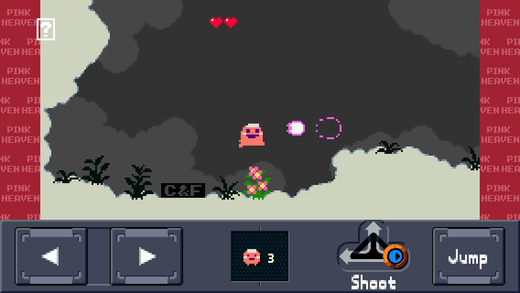 But we aren't finished yet.

On the same day as these new Kero Blaster levels were released a new spin-off game also arrived.

We caught sight of this one before. It's called Pink Heaven and has you, once again (as with Pink Hour), playing as the pink office lady.

Her task is to save the young shopkeeper from being abducted by aliens. If you complete it with certain conditions met then you'll unlock the Hard Mode.

You can download Pink Heaven for free on the App Store.