Toon in to see the game in action 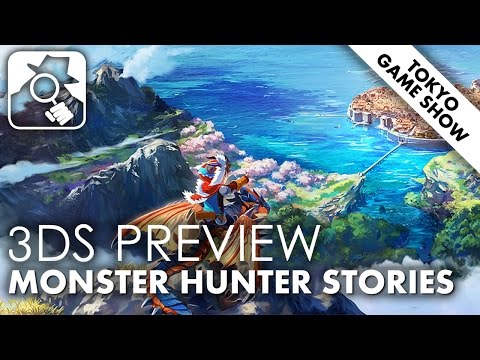 Hey there folks, I'm just back from Tokyo Game Show with something a little bit special for you - a hands on with the rather special Monster Hunter Stories on 3DS.

'Another new Monster Hunter?' I hear you ask. Well, not quite. This is a full-blown turn-based adventure RPG rather than the area-based action RPG like Monster Hunter 4 Ultimate that we've come to know and love.

This... can only be a good thing as far as I'm concerned. Even over 150 hours in, I'm still not particularly good at Monster Hunter 4 Ultimate.

Monster Hunter Stories isn't looking to replace the main Monster Hunter series, but rather extend the universe around it. For better or worse it'll also have a tie-in animation, which explains the lovely cartoony look it has going for it.

At the start of the Tokyo Game Show demo you have to steal an egg, which hatches to reveal one of five baby monsters that will join you on your quest as a mount and battle companion.

Now, I played twice, and both times I nicked Yian Kut-Ku eggs. I heard that some other players stole baby Congalala eggs, which was a devastating blow for me, as I too wanted to ride my favourite farty monkey into the boss cave and take on the demo's boss, Rathalos.

After nattering away with some Wyverian sage dude I rode my lil' Yian Kut-Ku around a field much larger than most Monster Hunter 4 Ultimate areas, taking on an Aptonoth or two before venturing into the boss cave.

The battle system isn't just a straightforward hammer the attack button until you win affair - it appears you have to combat your enemy's attacks with your own, occasionally duking it out by repeatedly mashing the "A" button.

There are moments where you can ride your mount for extra powerful attacks. My Kut-Ku could eat some Konchu and spit out fireballs for his special attack, and there are bound to be even more as you level up.

Monster Hunter Stories is mighty cute, and it's due out in Japan some time in 2016. I'd say we have a good shot of receiving this in the West too, but it may be a while before we receive any kind of confirmation.

The first Angry Birds movie trailer is... not terrible!