How split-screen multitasking works on iPad in iOS 9, and get the first compatible apps

One of the top features in iOS 9 - which will be available to download later today - is multitasking on iPad. Like, proper multitasking where two apps can share the screen and work simultaneously.

But how do you do it? What apps are supported? And will it work on my iPad? These are the questions that you we currently screaming at your computer while a nearby relative looks on with a worried expression.

Let us explain. In detail. And GIFs!

Slide Over is where you can pull a thin version of an app out from the right side of the screen. This lets you quickly check your emails without leaving a game, or take notes on something you're reading in Safari.

Only the app that is in Slide View can actually be used. The background apps is greyed out. And if you tap on it, the Slide View app will disappear.

If you drag down from the top of the Slide View window you'll see more apps you can use. They're in order of last use, from most recent (at the bottom) to oldest (at the top).

In terms of compatibility, the app in the Slide View panel must be specifically updated to offer this functionality. But they can pop over absolutely any app - though, you may find the app crashes if it's using all the memory on your iPad.

Slide Over is available on iPad Pro, iPad Air or later, and iPad mini 2 or later. 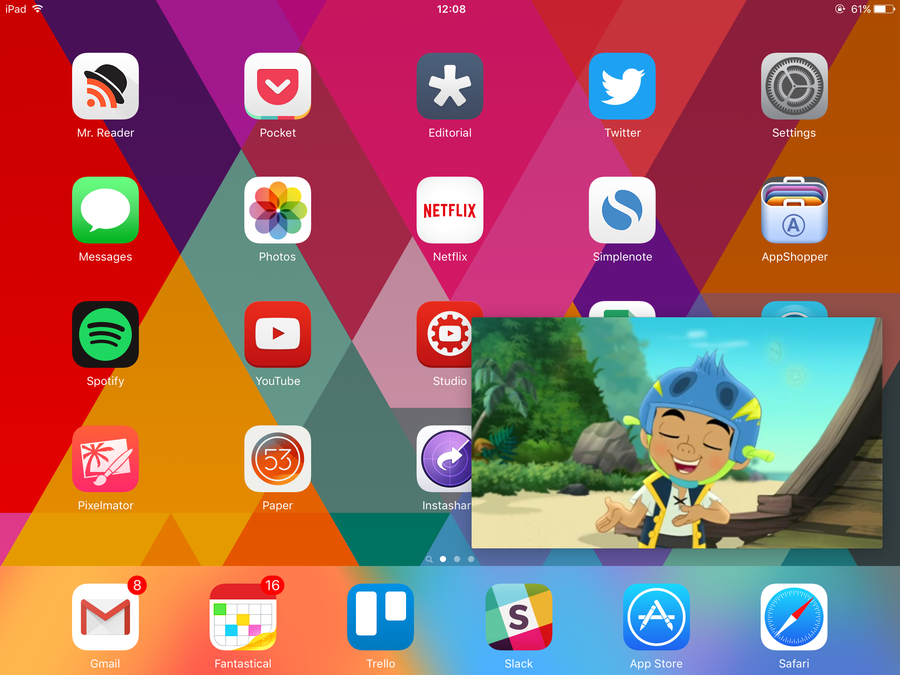 This lets you continue watching a video, outside of the original app. To do this, you just need to hit the home button while watching a video or press the pop-out button on the video player.

This will only work with the traditional Apple video player. Most apps use this (and most websites that you'll browse in Safari do, too). But the official YouTube app currently does not.

When the video is in pop-out mode you can move it around, resize it with a pinch, or stash it just off the side of the screen if you only wish to listen to the video, not watch it. There are buttons to pause, shut the video entirely, or return to the app.

Now this is real multitasking. And, as such, it's only supported on the newest of Apple devices (thanks to their monster memory capability). Specifically: the iPad Air 2 and the impending iPad Pro and iPad mini 4.

To do this, first pull out an app in Slide Over. Then, if both apps support Split View multitasking, a small handle will appear between the apps. You can now drag this into the middle of the screen and, hey presto, both apps will work simultaneously.

They're both active, so you can scroll them at the same time or copy text from one and paste it into the other.

Not many apps support the Split View and Slide View just yet. But if you want to try it out on some third party apps, go download:


Let us know how you get on.

iOS 9 is out, but are you getting a 'Software Update Failed' message?