When it was first announced back in April this year, we noted that Monster Hunter Stories has a "colourful art style, miniature monsters, and anime-like animations."

In general, it's a little less intimidating, and seems like it may appeal to younger players as well as act as a gateway drug for those not already addicted to the series.

This is reflected in the fact that you don't play a Hunter in the game. Yep, it's a first for the series. Instead, you play as a Monster Rider.

The mounts that you can see in the trailer below are known as "Otomon." They are raised from birth after you find an egg around the game's world. 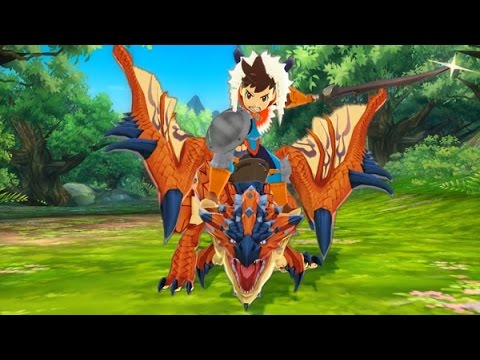 They're friendly monsters that you'll need to establish and deepen relationship with. You can perform co-operative attacks with them but they also have minds of their own.

The further you deepen your relationship with your Otomon the more "Bond Techniques" you'll unlock. These pertain to riding skill, mounted attacks, and defence.

Oh, and by the way, Monster Hunter Stories has a turn-based battle system. Yep, there'll be none of that intense real-time action the Monster Hunter series is know for.

That said, monsters have different habits that you'll need to keep an eye on while battling them. A sharp eye will inform you when to use the "Power," "Technique," and "Speed" commands.

Monster Hunter Stories will be coming out in Japan for 3DS. A western release hasn't been confirmed yet.