AirConsole is a service that allows you to play a selection of games on a PC by using your phone as a controller, and it's a curious proposition.

All games on the service are free at the moment, though when third party developers get involved this will probably change. 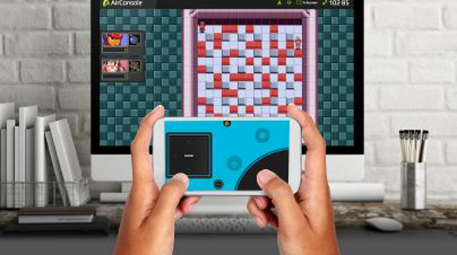 Currently all the games at launch are entirely produced by the AirConsole team. The line up includes pretty standard stuff like a trivia game and a poker game, and there's also a nifty little four player arena combat title called PolyRacer which I rather liked when I tried out the closed beta.

The platform turns your phone into the controller, adapting the button layout for when you're browsing a menu, or when you switch to a different game.

The star attraction of the service at the moment is undoubtedly NES Simulator. It's a fully featured Nintendo Entertainment System emulator which allows you to drag and drop ROMs into the browser so that you can play classics of yesteryear without needing to download additional software. 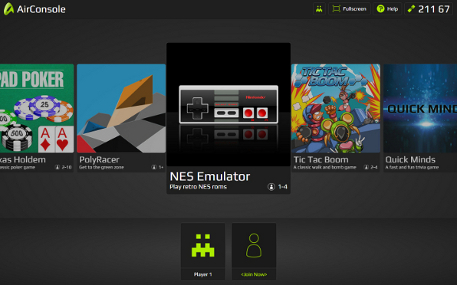 This means you can get your mates round a computer, sync up your phones to AirConsole, and be playing four player Bomberman II on the same screen within seconds.

How you go about getting a ROM of Bomberman II is of course a legally grey matter, and just for the record, Pocket Gamer (and AirConsole) aren't condoning piracy - so maybe give the emulator a try with a bit of homebrew instead.

More original games are on the way for the service, including Famobi's Formula Fever, and developers will be able to port games made in Unity3d and HTML5 to the service with the use of an API.

A dedicated AirConsole Controller App is also incoming for iOS and Android devices, though what this will add to the experience is currently unclear.

As I noted, I've played AirConsole in beta, and the tech is quite impressive, even if the selection of original games is a little lacking. There's definitely a lot of potential here though, especially if developers embrace the platform.

AirConsole goes live on September 4th, and launches ads-free. Head on over to airconsole.com and give it a bookmark so you don't forget, yeah?

PixWing is the spiritual successor to Sky Odyssey, out September 10th