Did you know, you can filter our news stories to just show new releases? It's true! Click here to see all the big games that have recently hit the App Store.

Now, there are more games than we could ever write stories for. We are only human, after all. I think. I try not to pry into the staff's personal lives. Either way, there are too many games.

Here, then, are the best of the rest of last night's new releases.

Dice Mage
By Tapinator - Free
Subscribe to Pocket Gamer on

"Dice Mage is a spell combat RPG with magical exploding dice. Explore floating worlds, fight enemies and win loot in high-stakes games of chance on a quest to defeat evil." 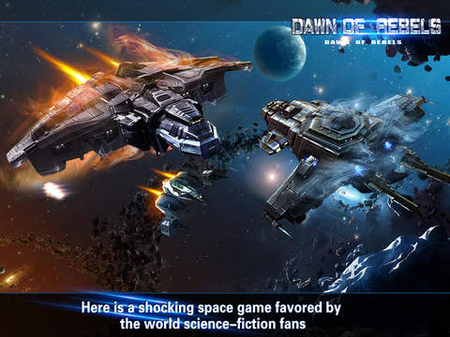 "Dawn of the Rebels is a war strategy game under the background of science-fiction space. 'Original Empire' becomes a super interstellar empire by making continuous brutal aggressions and colonization. Instead, you organized a rebel army from the inner Empire, and became a 'rebel army' of justice."

Sheeperzzz
By Ketchapp - Free
Subscribe to Pocket Gamer on

"1 sheep… 2 sheep… 3 sheep… Stop snoozing, time your taps and jump over your fellow sheep to wake them up. Tap to jump, tap and hold to double jump! Be careful and try not to bump into anything, that will only give you a headache."

"This summer, the arctic is the hottest place to be! Experience the rush of piloting a heavily armed helicopter through epic arctic landscapes. Protect your supply ships, shoot down hostiles and save the day." 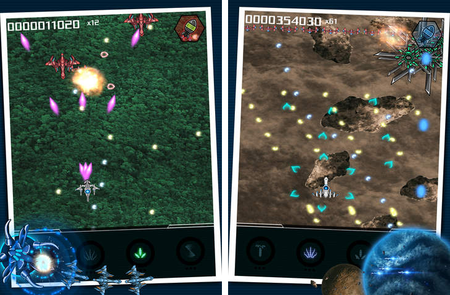 "Squadron is a classic Shoot'em Up. Your goal will be quite challenging as you will have to save the Universe from its evil enemies. Aboard your spacecraft, you will have to get rid of a large number of enemies while dodging their attacks. Will you be skilled enough to understand your enemies strategy and attack patterns?" 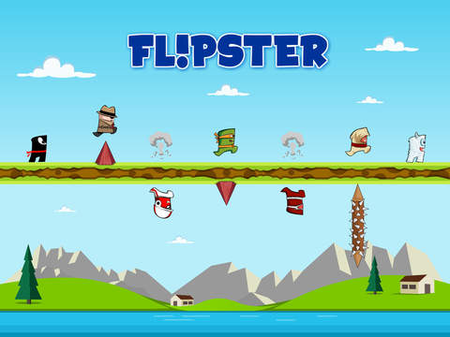 "Flipster the friendly Alien Blob has fallen from his U.F.O while traveling on his family vacation. Flip and Jump through devious obstacles blocking your path at every step of the way. Play and Unlock over 10 characters! How far can you get?" 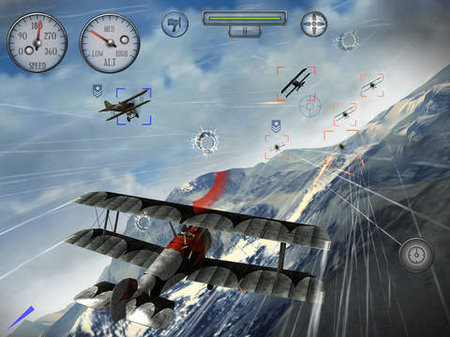 "Earn your wings as a World War I Flying Ace in Sky Gamblers: Rise of Glory! Immerse yourself in WWI combat and the dawn of aerial warfare as you pilot revolutionary flying machines. Take-off solo in mission-based Campaign Mode, or take to the skies online with up to 8 players in real-time multiplayer."

Note: This was the first Sky Gamblers game. Atypical has "relaunched" it after previous publisher, Namco, had removed it from the App Store. 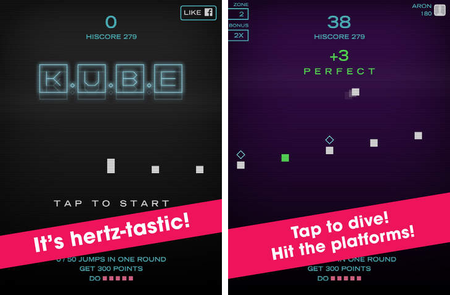 "Guide the K.U.B.E through the galaxy by making sure it lands safely on the platforms. Tap to dive towards the platform. And if you make a perfect bounce you’ll jump higher and further! How far can you go?" 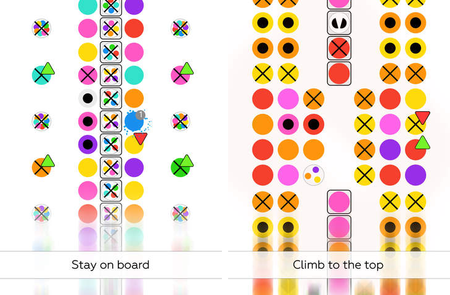 "Dots are on the move! Stay on the board, reveal the hidden rows. Climb to the top, how far can you slide?"

"A beautiful visual experience. Control the fate of a single dreamlike organism through the course of itís life. Explore the vast ocean in search of micro-elements that will help you evolve from a tiny speck of life into a magnificent Sparkle. You can choose whether your Sparkle will become a quick and relentless hunter, a peaceful plant-eater or a creature whose feature lie in between." 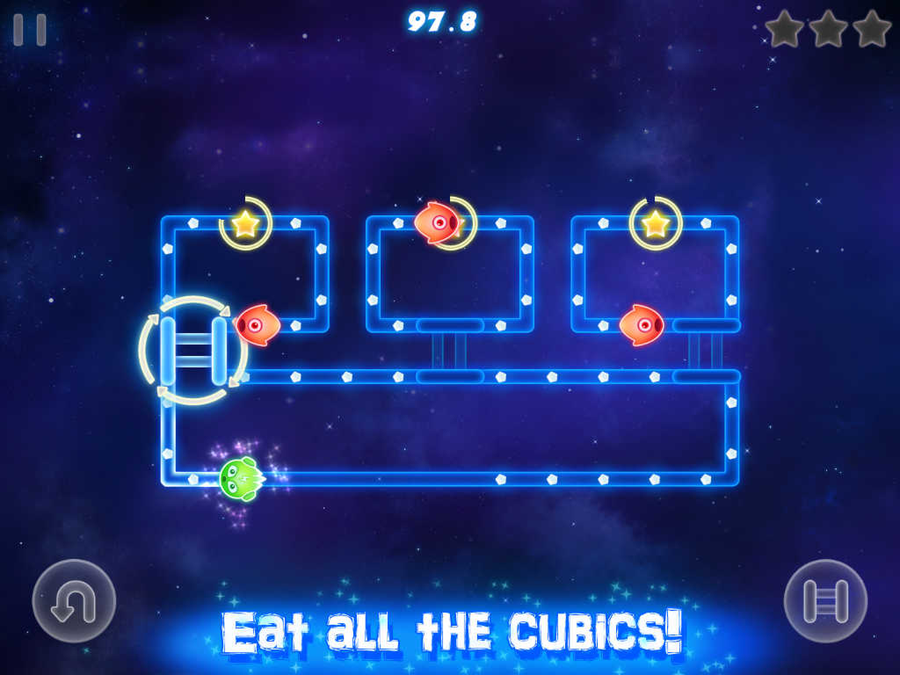 "Eat all of the cubics, evade the monsters and survive… in Glow Maze! A great new Pac Man styled arcade game for 2015!"

"Winter Fugitives is a stealth game that will put all your skills to the test to run away from an isolated prison in the mountains. As the last inmate from your ward to join the unexpected escape, you’ll have to find your way under a snowstorm and through the barricades."

"Ocopoco is a fun and relaxing puzzle game from the creator of Triangulae, this time with circles, circles, and more circles. Swipe. Grow. Pop. Score." 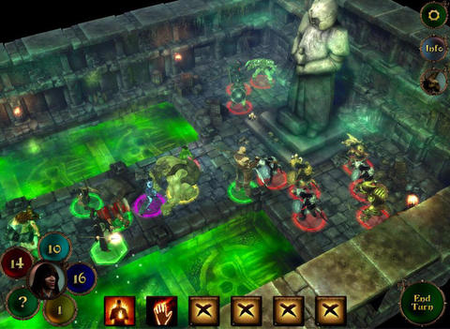 "Demon's Rise is a turn-based tactical game where players must lead a party of six heroes through the bowels of an underground city. Battles are intense affairs where the proper use of terrain and cover is as important as the choice of spell or attack."

"It's "Clash of the Titans!" Or, rather, "Clash of the Pygmies and Landians!" In cooperation with Bolt Creative, Nine Tales Digital brings you a new spin on their popular Desert Ashes turn-based strategy game, guest starring a powerful Pygmy army defending their territory."

"The dragons are under attack! Help them to defend their homeland by unleashing them on their foes. Use your abilities to launch explosive meteors and powerful lightning bolts upon those who would steal from the dragons!" 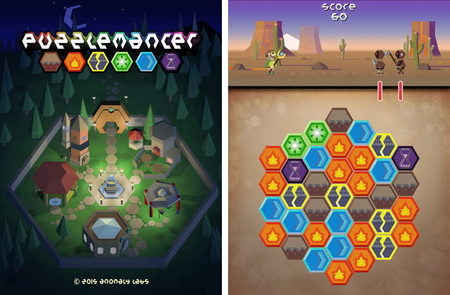 "Match hexagons to cast spells at your enemies in this hexciting game of magical combat. Hexecute the unworthy using a diverse arsenal of magic spells!"

"Feel the rush as you ride your bike across hazardous trails avoiding obstacles while performing gravity defying tricks to reach the farthest you can. The game combines authentic mountain bike downhill action with an extreme endless runner."

First impressions of Final Fantasy VII: What's changed, and is it any good?