Casual Connect 2015: Ovivo is two gravity-flipping platformers in one

There are two platformers in the black and white world of Ovivo.

Flip the gravity switch, and your character – a little black dot against a white backdrop – sinks into the ground and becomes white on black, traversing the ground from beneath. With this mechanic, a whole world of gravity-flipping madness is opened up.

My time with Ovivo at this year’s Casual Connect SF called to mind The Sun and Moon, a puzzle platformer from Daniel Linssen that began as a game jam prototype.

But unlike Linssen’s game, which presents levels as compact puzzles that take precision and quick reflexes to complete, Ovivo’s world is a scrolling obstacle course of sharp inclines, deep trenches, and odd shapes that require you to dive far into the ground and come out soaring on the other side to overcome. Other times, you just need to tilt your head a bit and play it upside-down.

It’s plenty fun to just swim through the ground, gaining more air with each dive until you can make it up onto a high platform – or a low one, depending on which dimension you’re trying to traverse.

While this basic movement itself can be super satisfying even in simple scenarios, getting from point A to point B can still require more complex, twitch-based stunts and Ovivo offers plenty of opportunities to do so.

A common scenario in Ovivo might involve something like leaping along floating platforms by diving just far enough to gain speed, but not too far that you fall out the other end, then plunging into a ledge and coming up safely at the top of a tall cliff.

Ovivo’s black and white world isn’t without its dangers. Luckily, checkpoints offer security as a reward for completing particularly tough patches and mark the next challenge. 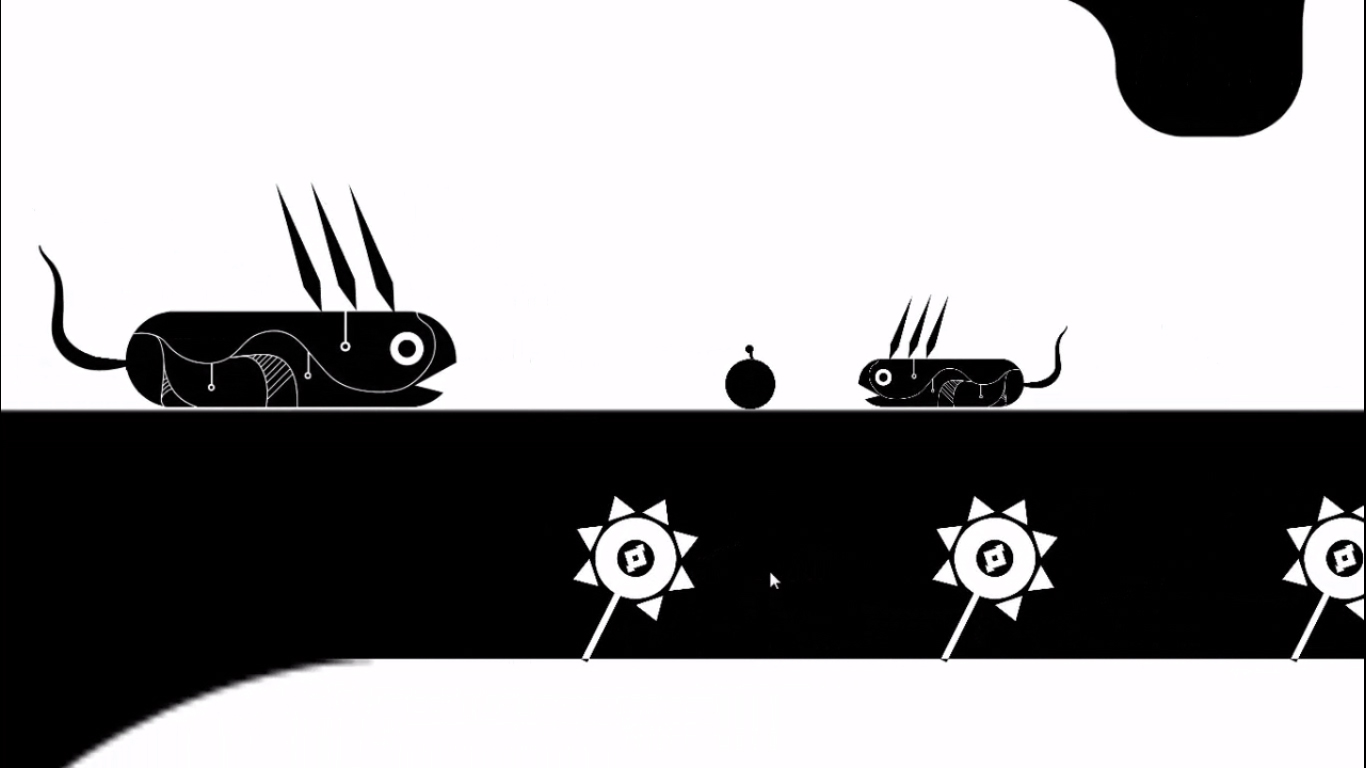 The only enemy I encountered in my Ovivo demo came in the form of lethal spikes – a staple in platformers – but there was also a tree that dissolved my character in its thin, intricate branches when I tried to traverse through it. Then, of course, there’s gravity… a useful power, but dangerous when used incorrectly.

Ovivo will have more than just environmental hazards to beat, though.

Fish-like enemies that slide across the floor, triangle-eyed tree insects, and other abstract creatures make appearances in Ovivo’s trailer, resembling some cross between hieroglyphics and the imaginative characters of a Joan Miró painting.

Its sharply geometric monochrome makes Ovivo one of the coolest looking games at Casual Connect’s indie show floor, but it plays just as well – with a controller, at least. There were no touch-based devices with the demo at the conference.

Ovivo will be coming to iOS, Android, and Windows Phone in addition to PC, Mac, and Xbox. A release date has not yet been announced.

Vertical city builder Block'hood could makes its way to mobile

Collectibles. Enemies. Kick-ass visuals: Cerulean Moon has everything you could want in a platformer

Ovivo review - A platformer that's well worth your time