Gamescom2015: Hands-on with Skyworld and Arizona Sunshine for HTC Vive

The small booth in which I tested it at Gamescom contained two infrared cameras on bulky tripods and a PC tower, with cables on display. The hardware itself – comprising a headset and two hexagon-topped controllers – doesn't have anything like the sleek contours of its rivals.

But don't let that fool you. When you get inside the mask, Vive feels anything but primitive.

I got to see two Vive titles at Gamescom, both by Vertigo Games, both in the same booth, and – I should stress for balance - not under the same PR-finessed conditions that I saw the Oculus Touch, though Vive was just as impressive.

The first demo was Skyworld, a VR game unlike any other I've tried. Rather than giving you a first-person perspective of somebody in a virtual version of the world, it gives you the perspective of a god, looking down on a floating island, one of several islands hanging in the sky.

In your left hand is a pointer, represented by a floating blue dot, and in your right is a wand. In front of you is a waist-high wooden rim enclosing a grassy area littered with various buildings. In the middle of the island there's a mountain, head high at its summit, and on top of the mountain there's a dragon. 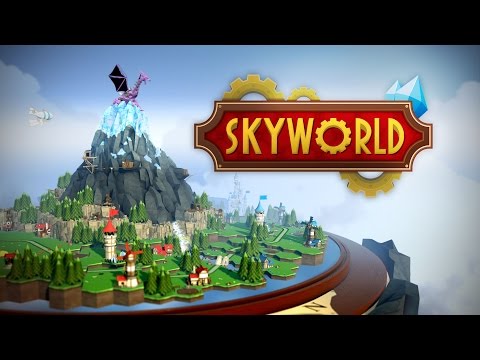 The game itself is a fairly basic hex-based boardgame. You point your wand at fields or buildings to upgrade them or create new types of units through simple contextual menus. I made an army, represented by a wooden soldier figure, and steered it, over two turns, towards an enemy building.

Each turn constitutes a season, and as you advance through the seasons the world changes, from lush and green to barren and snowy.

Using your wand you can pick up items in the game, such as trees, and toss them about. Using the pointer in your other hand you can open books that contain spells, including one that summons the dragon, which leaves its nest and flies lazily around the island, guided by your wand, until you instruct it to burn something.

The level of detail on the island is impressive. A little dot that you notice squirming across the grass turns out to be a squirrel when lean in take a closer look. A track curves up the mountain carrying wagons back and forth. Clouds drift across the sky.

You can spin the island around with your wand, and lean across the table to peer behind the buildings, or get a closer look at the mountain.

And here's the thing: there's no reason that you should lean across. There's no island.

Except there is. As I spun the world I found myself diligently moving out of the way of the castles and other buildings as they swung past.

It took an effort of will to actually wade into the landscape, and a greater effort still to plunge my face into the blackness under the mountain. And when my face passed through the clouds - don't laugh - I could almost feel the coldness in my throat.

I didn't spend a lot of time with Skyworld, but it didn't strike me as a particularly deep or original game. But that's pretty much irrelevant. What matters is how much the game and the technology made me feel as though I were really there, looking down and toying with a real object.

It was kind of amazing.

The second game I played was more conventional. Arizona Sunshine sees you pinioned at a series of points in the desert, shooting stuff.

When you move your real arms a pair of beefy virtual arms move in sync (sidenote: it is incredibly strange to look down and see your virtual arms being manipulated by somebody else, as happened to me while the developer was setting up my controllers).

First I picked up a pistol by gripping a button on my right controller. Then I shot some cans and bottles with it. Then some zombies appeared and I shot them too. Then I was able to pick up a second pistol, which I used to shoot zombies with both hands simultaneously.

There's no reticule, so I had to rely on my own (considerable) marksmanship skills. Developer Vertigo Games told me that it's considering adding tracers for some of the guns to make aiming easier.

Whenever I ran out of bullets I had to press a button at the back of the controller to eject my clip before bringing the handles of the guns against my chest, where extra clips were already waiting, John Woo like, in my holster. This manoeuvre is remarkably satisfying.

Eventually I was asked to discard the pistols in favour of a sub machine gun and a shotgun, and this threw up a strange quandary.

Picking up a gun in Arizona Sunshine involves pressing a button and then letting go. Once you've got the gun in your virtual hand you only have to worry about pulling the trigger. However, holding something in real life doesn't work like this – in real life you have to keep holding.

When I pressed the button to discard my pistols, and watched them tumble out of my hands, I found the sensation of still having a controller in my real hand quite jarring. Wrist straps were a precaution with the Wiimote. I suspect they'll be closer to a necessity with Vive's controllers and Oculus Touch.

Arizona Sunshine isn't a particularly exciting game idea, but it's well executed and it demonstrates that the hardware is up to the task of putting a gun in your hand without giving you a reticule to guide your shots. Your shots feel true without it.

Of the two demos I preferred Skyworld, as you can probably tell. There's nothing wrong with Arizona Sunshine, and there will no doubt be an appetite for its Time Crisis-esque gameplay when VR hits the market.

But Skyworld is something different. It's the least obvious use of VR technology I've seen, and in some ways the most revelatory and immersive. Of course, the credit must also go to the Vive hardware, which tracks head and hand movements with astonishing, life-mimicking accuracy.

HTC Vive will be out for Christmas. Skyworld is due to be released this year as well, while Arizona Sunshine is slated for next year.