Out at midnight: Race the Sun is a minimalist arcade game about dying in darkness or a collision 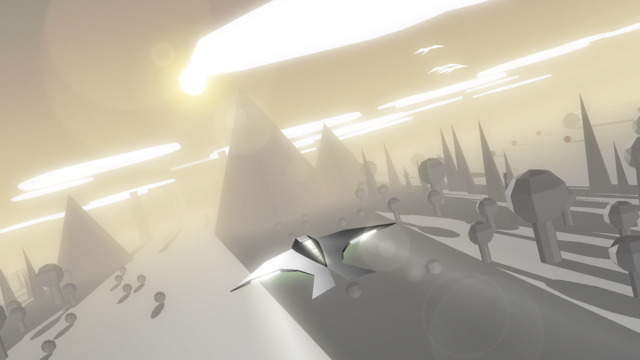 Having taken off at around noon today in New Zealand, Flippfly's Race the Sun is currently en route to your local App Store.

Race the Sun has been around since August last year on PC, and October on PS Vita and the other less portable PlayStation consoles. We gave it a Bronze Award, praising its gameplay but complaining that there isn't enough of it.

Set in an abstract, minimalist world of gleaming, smooth-edged polygons, the game sees you piloting a solar-powered craft at breakneck speed towards the endlessly setting sun while avoiding waves of static and moving obstacles in numerous uncooperative patterns.

Pickups momentarily delay the sunset, but every run inevitably ends in darkness and failure. There are levels to work your way through, items to customise your ship with, and new worlds to unlock, but the most interesting thing about Race the Sun is its 24-hourly map changes, designed to prevent players learning worlds by heart.

The iOS version of Race the Sun is distinct from the others in that the map changes at a fixed time each day (midnight CST) but the Game Center leaderboards cover the last 24 hours, meaning that scores for old maps and new will sit alongside each other.

We'll let you know if we encounter any other major differences when we get our hands on it.

Want more? Check out our growing collection of Race the Sun articles!

Out at midnight: Cube Jump - Crossy Road in space

Help some flailing indie developers get to Gamescom in space, in Cosmonautica

Race the Sun - And they rode off into the sunset