There's been a great deal of evidence that Angry Birds Under Pigstruction is actually Angry Birds 2 in disguise.

Mark's already explained how the app icon for Under Pigstruction bears an awful lot of similarity to the promo art for Angry Birds 2, and how new roster addition Silver is also featured on that same art.

But two new pieces of evidence have surfaced, and from surprising sources.

The first is to be found on the various Rovio-approved wiki pages all now referring to Under Pigstruction as Angry Birds 2.

For example, over on AngryBirdsNest - which is essentially a mouthpiece for Rovio to its fans - you'll see this everywhere, just see the example below.

But more concrete evidence than that comes from the official Angry Birds Facebook page.

Today it posted this image... 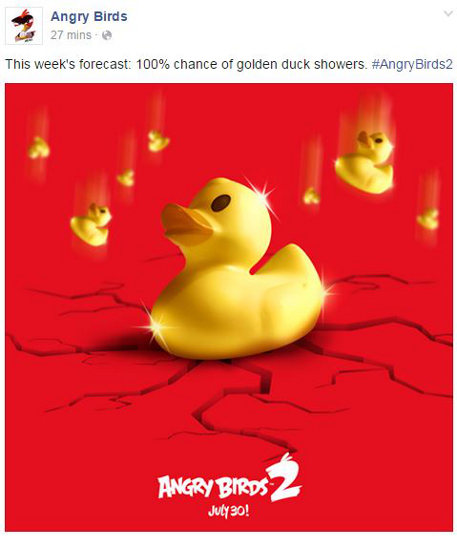 It's a poster advertising Angry Birds 2, and makes reference to a chance of "golden duck showers".

The only references to golden ducks in previous Angry Birds games is a level named after them, and the new Golden Duck spell in Angry Birds Under Pigstruction, which showers the level in, you guessed it, golden ducks.

Hence the pun on the image.

So yeah, Angry Birds 2 is all but confirmed to be Angry Birds Under Pigstruction. If you want to grab the game right now, rather than wait until it releases on July 30th, you can watch our video on how to do exactly that, below.