And the prize for the winner of the Very Big Indie Pitch goes to... the Department of Homeland Security?

Over the weekend I received an email from Jake of Shovelware Games, the developer of Zombie Match Defense, which was the winner of our Very Big Indie Pitch at Pocket Gamer Connects in San Francisco. It went like this...

"Unfortunately I bring sad tidings. The trophy that I was presented with at PGCSF was confiscated by airport security on my way back home. This is the last I saw of my beloved bat as it was wrestled from my hands by a TSA agent." 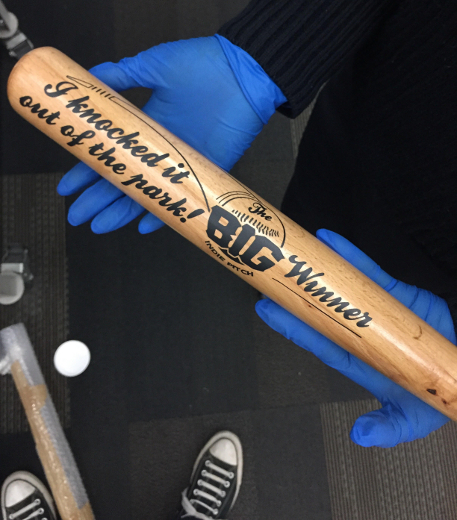 Now, it should be stated at this point that us here at Pocket Gamer, and the developer, both understand that the member of airport security was likely only doing their job, and that the safety of air travel should always be of top priority.

But as everyone knows who has tried, getting a confiscated item back from the Department of Homeland Security is nigh on impossible, so this bat will probably end up being destroyed.

And that's a pretty big deal, as acquiring the bat is only possible by developing the winning game at a Big Indie Pitch. Jake explained to me that his partner, who couldn't attend the event, is inconsolable;

"It seems that never having the joy of wrapping his hands around it has left him with the feeling that it is just barely, yet eternally beyond his grasp, as though he is being subjected to some existential Tantalusian torture".

Strangely Jake also had some other items on-board that are occasionally questioned by overly eager security agents, such as a laptop, several tablets, and a 3 foot long metal tripod, though these weren't questioned, leading us to question whether the TSA agent was actually a failed and bitter indie dev in disguise, jealous of Jake's victory.

Whatever the case, we're in the process of sending out a replacement.

Impulse GP - Not quite the sum of its parts