You can even make the Avengers

It's here. It has plummeted to the ground and, as every superhero does, performed a perfect three-point landing. Marvel Future Fight is now available on iOS and Android.

That's nice, you may be thinking, but what is it?

You can probably guess (with it being a Marvel superhero game) that it's free to play. That's become standard for these games now, it would seem.

Aside from that, it's an action-RPG that has you taking a team of three heroes of your choice to beat up baddies across hundreds of missions.

Core to the game is collecting and upgrading superheroes and super villains to outfit your team. They come in four different types: Combat, Blast, Speed, and Universal.

These 36 heroes available consist of Marvel classics such as the Avengers, Spider-Man, Daredevil, the Guardians of the Galaxy, and many more. You can get bonuses for forming "classic" Marvel alliances.

In the missions, you control one hero at a time, but the others will appear regularly to help out with devastating attacks based on their powers. You can switch between them all as you wish. 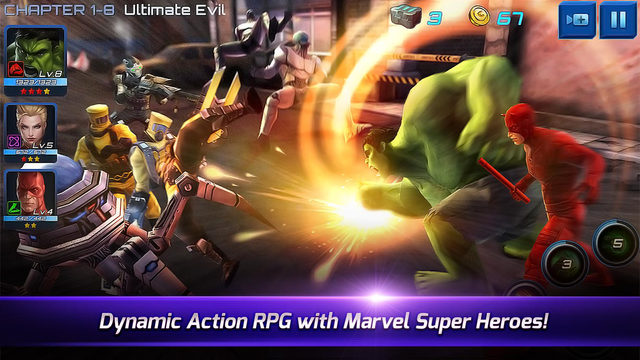 No matter who you put together, you'll be pitting them against villains such as Loki, Doctor Octopus, and Ultron. The story written by Marvel author Peter David explains all as you progress.

And if you've had enough of that, then you can enter online 3v3 battles to pit your team of champions against another player's team.

Fancy giving it a go? Cool, you can download Marvel Future Fight for free on the App Store and Google Play right now.