Apple has made its own smart watch.

But, like any new Apple product, it wasn't the first on the market. Android users, for example, have had wrist-worn computers of their own for ages in the form of Android Wear.

But how do the two stack up? Which has the best features?

Well, we grabbed an Apple Watch Sport and a Motorola Moto 360, strapped them to our wrists (not at the same time. That would be ridiculous) and put them head to head… 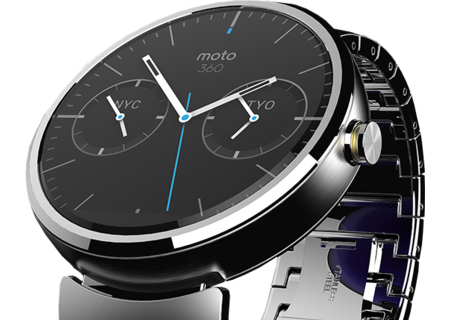 All Apple Watches are rectangular, but there are two sizes and two types. The Sport 38mm one we're using feels great and looks incredible. The black levels are especially impressive as they sink right into the Watch's body.

Android Wear devices can be rectangular or circular. The Moto 360, which we're testing, has a round face. Which is cool, and looks more like a watch than like a tiny computer strapped to your arm.

But man, a circular display is not particularly useful for displaying most types of data and few apps make good use of the unique screen shape. Oh, and it's not even circular: there's a weird black section at the bottom, cutting off the last 10 percent of the display.

Winner: Our Apple Watch screen feels more cramped than the Moto 360 one, but its sharper and with more luscious black levels. Also, the 360 is a good explanation for why computer monitors are rectangular.

The Apple Watch has lots of inputs. Not only does it have a touchscreen, but you can press it down more firmly for a secondary tap (with a nice haptic feedback). Plus, there's the digital crown which is both a button and a satisfying scroll wheel.

Apple Watch also has a button that quickly accesses your friends list - sadly, you can't change this to perform a different action which seems like an oversight.

Android Wear, or at least the one we're testing, has a standard touchscreen and one clicky button on the side which turns it on and off.

Winner: While I normally think less is more, Android Wear is quite difficult to use because it's all touches on a tiny screen. The extra inputs on the Apple Watch, especially the digital crown, are quite welcome. 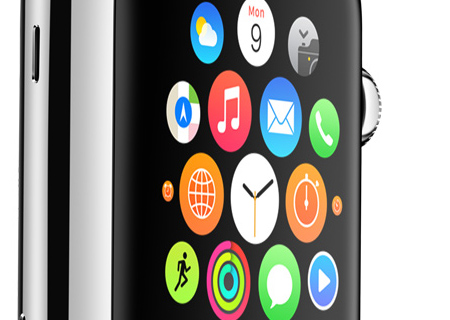 The interface on Apple Watch is a little more complicated than your iPhone. It effectively has two home screens - the watch face and the icon list - and you'll need to figure out where you should swipe to bring up glances or notifications or whatever.

But man, Android Wear is something else. It's so poorly designed and confusing, I can't even believe it's real and not some beta build.

The watch face has cards and notifications, which show up in no obvious order, but we'll get to those in a bit. Otherwise, you tap the screen to get a dictation screen. That's despite the fact that you can say "Okay Google" from the watch face to do the same thing.

Scroll down from this screen and you'll get a bunch of options. Some are just dictation suggestions - the navigation page, for example, is nothing more than a static page that tells you how to ask for directions. Others, like the timer, are actually interactive.

You'll have to go all the way to bottom of this list and press "Start…" to find more apps. Why are apps hidden away in the depths of some weird dictation menu? Why does it take two taps and a long ass swipe to get to them? Why is life so much pain?

And if you open an app, you can't go back to the app list. It's back to the watch screen for you!

Winner: I can't believe how bad Android Wear is in this regard. It's clear that it wants you to use dictation to do stuff, but if that's not possible you suddenly have to enter a Byzantine nightmare of sub menus just to find the god damn heart rate monitor. Absolute fatality by Apple Watch. 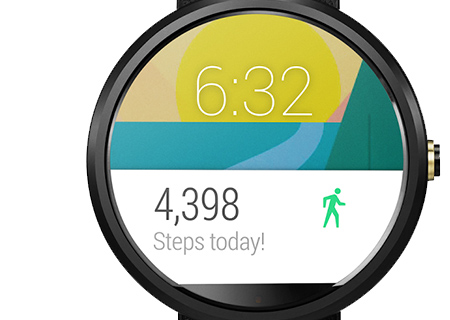 Apple Watch uses glances, which are accessed from a swipe up on the watch face. These offer tidbits of info - the latest tweet, your activity goals, tomorrow's events - from up to 20 different sources.

Android Wear has similar tidbits, which pop up amongst your notifications as cards on the watch face, and you can scroll through them vertically. They typically offer more info than Apple's ones as the cards can have multiple pages.

But they have a weird, unfathomable logical about what will show up and when. It's all driven, I guess, by Google Now which is supposed to give you relevant data based on location and time - but you can't seem to add stuff manually.

I dismissed my step counter card and some nonsense from Pinterest, and now have no idea how to get them back.

Winner: While I can't figure out how the hell you make stuff actually show up on Android Wear, I'll give it the edge for showing more information with each card. 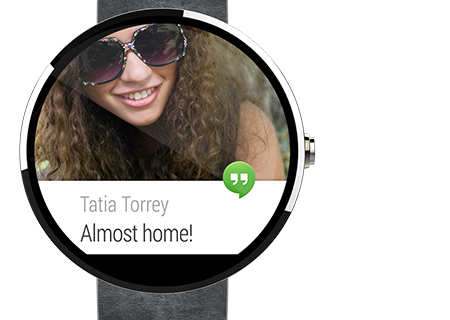 Notifications work similarly on both. They are mirrored from your phone and show up on the main screen, but can be found in notifications, on Apple Watch, and amongst your cards, on Android Wear, after that.

You can quickly respond to notifications like emails and texts with dictation or pre-canned replies on both devices. I can't find a way to set custom replies on Android.

An incredibly annoying thing about notifications on Android Wear is that some pop-ups will become grouped together if you get more than one. I had four tweets in quick succession could only see the first few characters of each unless I grabbed my phone.

Also, where the Moto 360 gets your attention with a classic smartphone vibrate, the Apple Watch uses a friendly tap, driven by a haptic motor.

Winner: Apple Watch is just better thought out, and getting nudged by that haptic motor is just lovely. 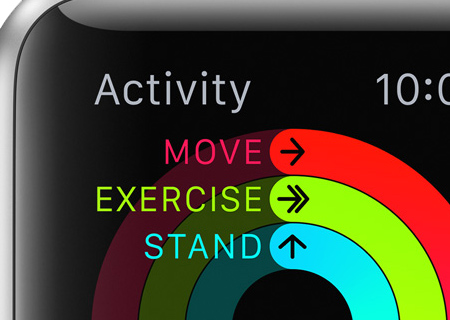 Android Wear can do very little from the get-go, to be honest. You can send emails and messages, but can't actually look at your inbox. You can do some fitness stuff, take voice notes, look at your calendar, and do clock stuff like timers.

A lot more functionality is there, but it's only accessed through voice. There's no weather app, for example, but you can ask Google "what's the weather going to be like tomorrow". Which is, I should add, incredibly inconvenient in 90 percent of use cases.

Apple Watch can do a lot more out of the box. You can do everything above, except voice notes (unless you handoff to your phone), plus look at your message and email archives, listen to music, look at images, and check stocks. They're all accessed through discreet apps like a mini iPhone.

Winner: It's got to be Apple Watch. Not only does it have more functionality, but you can use most of it without being forced to use dictation. Top marks. 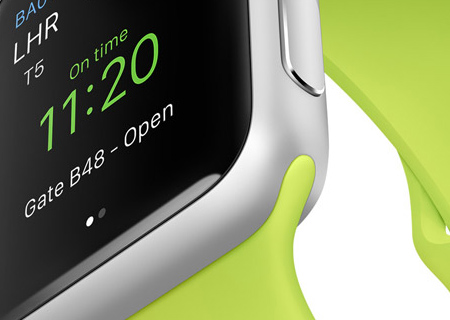 Both devices let you install apps and games. Like we mentioned above, Android Wear hides those apps inside a hidden sub menu for some bizarre reason.

Apple highlights Watch-compatible apps in the App Store, and offers a dedicated shop for Watch apps. Android Wear does neither, forcing you to hunt for apps that actually work.

While Android Wear got a head start, it's still waiting on apps like Twitter that were available on day one for Apple Watch. As always, Android is more open than iOS, so you could find more interesting, less restricted stuff on Google Play.

Also, custom watch faces. Right now, Apple Watch is stuck with whatever Apple thinks is cool whereas Android Wear gets all the custom faces you can stuff down your pants.

Winner: A tough call, truly. But in just a few days, Apple Watch has received more high quality and big name apps and games than Android Wear has seen since launch. We'll take those over a Goldeneye watch face. Just.

Functionality without a phone 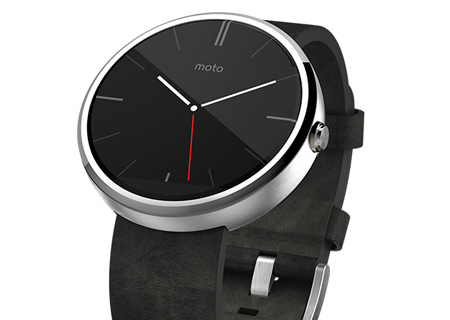 Let's say your phone runs out of battery, or you left it at home. What can the devices do without a connection?

As long as the Apple Watch is on a known wi-fi connection it can still send and receive emails and iMessages, and talk to Siri. And even without wi-fi it can show cached photos and saved music, track all fitness info except GPS data.

It can't do maps, weather, stocks, and - most disappointingly - any third-party apps. Those all use your iPhone for their brain.

Android Wear can't do "OK Google". The only default tasks it can do is fitness stuff, time stuff, and calendar stuff. But it can use third party apps.

Winner: I'm going to give Android Wear the edge for letting you run apps without a phone. However, Android Wear is definitely getting wi-fi support in an upcoming update, and it looks like Apple Watch will get standalone apps. 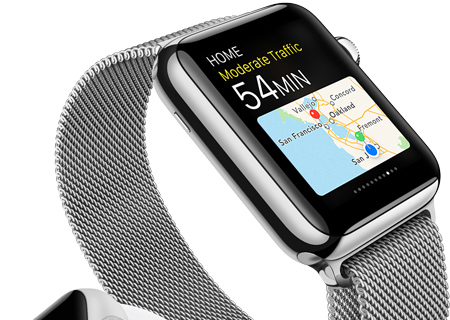 Navigation works pretty similarly on both. You can start by dictating into Google Now or Siri, or by using the Maps app on your phone. But while Apple Watch shows the full map, Google Now uses a more abstract system to show which roads to take.

It looks quite nice and makes things simple for quick glances, but nothing beats seeing a proper map.

Winner: Then again, you get Google Maps on Android Wear. While Apple's maps are better than at launch, they still can't compete with Google. A win for Android Wear.

It's a little to compare comfort and style. There are so many different bands and designs on both, that it's impossible to make a satisfactory comparison.

Device compatibility, though, deserves a mention. While the Moto 360 connected to my Nexus 7 tablet without a fuss, the Apple Watch does not work with iPad. I'm still not sure why.

Oh and price. Apple Watch starts at sixty million dollars while you can pay for an Android Wear with shirt buttons and bits of rice. 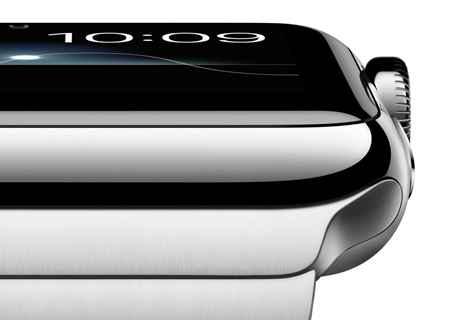 The Apple Watch wins. It's a bit of a knock-out, to be honest.

Android Wear has some advantages - like custom watch faces, apps that work without your Android, and a wider range of styles - but it's so poorly designed from a software angle compared to Apple's doodad.

The Apple Watch takes about five nanoseconds to understand, at which point it becomes effortless and joyful to use. I still don't know how to get the steps counter to come back on the Moto 360.

Both are still young and will change dramatically in both software and hardware updates. And hey, it's not like you have a choice - if you have an Android or an iPhone, you have to use the smartwatch platform favoured by the manufacturer.

But at least Apple fanboys can sleep easily at night know their device is a thousand times nicer and easier to use than the Android equivalent. It was touch and go, for a second!