Three days with the Apple Watch - a preliminary review

I don't normally wear a watch, and I've scoffed at the very idea of strapping a brainless computer on my wrist. It's just for lazy people who can't be bothered to take their iPhone out their pocket, I said.

So, nearly 72 hours in, have I changed my mind? 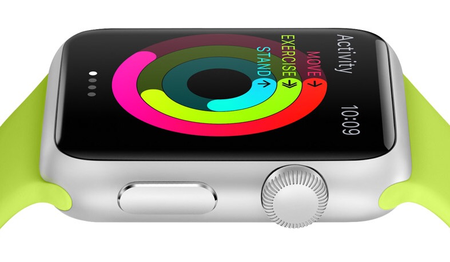 The Apple Watch itself is a sleek gadget, as one would expect from Apple. The smooth aluminium body and glassy black screen make it look like a tiny computer, but the digital crown adds a bit of mechanical, retro class.

The sport band is the cheapest of the bunch and is a little plasticky, sure. But it's very comfortable and - combined with the light weight of the Watch - you barely know its on your wrist after a few hours. 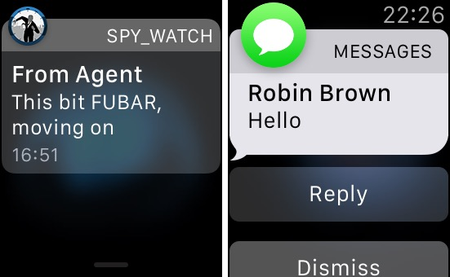 Getting your notifications right is a strong contributor to whether the Watch is a useful addition to your gadget arsenal, or an annoying distraction.

When I first got the Apple Watch I told it to nudge me about everything. Every tweet, iMessage, email, Slack alert, eBay listing, game reminder, and podcast episode. And man, it's annoying.

Eventually I figured out that less is more. You want to build up an notification hierarchy where all the normal crap lands on your phone, but the more important stuff - for me: iMessages and Twitter DMs - goes to the Watch.

That way, you'll know that if your phone buzzes and your watch doesn't, it's probably something you can ignore until you're next alone and have time to deal with it. If your watch chimes in, you might want to excuse yourself and take a peek.

Unfortunately, while you can send different notifications to your phone and watch for Apple's apps (for example, you can make it only notify you about specific email inboxes on the watch) third party apps must mirror all their notifications to the watch.

So you can't send Twitter mentions to your phone and DMs to your watch. Well, unless you have multiple Twitter apps but that's hardly a solution. 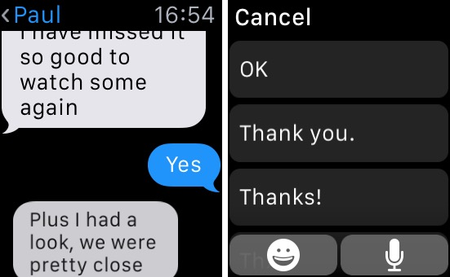 People are constantly badgering me because I'll leave my phone somewhere and then never reply to iMessages or answer phone calls when I'm elsewhere in the house or in the garden.

In the short time I've had this thing I've been able to respond to two conversations despite leaving my phone somewhere in the house. So that's nice.

Surprisingly, you can hold a conversation with just emoji and default responses like "yes", "cool", and "absolutely", and the dictation works quite nice too. You're not going to have a deep chat about the meaning of life from this thing, but as a quick way to say "I'm on my way"? It works well.

Top tip: set one of your default replies to "hold on, lemme go grab my iPad so we can talk properly". 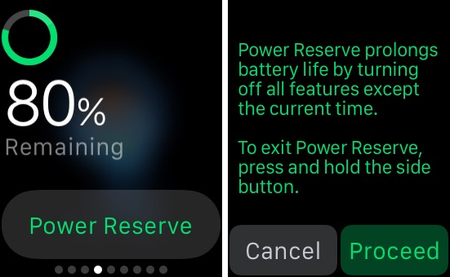 Much better than I thought it would be.

I charged the Watch to 100 percent overnight and grabbed it at 7am this morning. It's now 10pm and after standard use - some apps, some games, some glances, some notifications, and plenty of telling the time - it's now 53 percent.

So I have no worries about this thing lasting an entire day and could potentially charge it every other day at this rate. Still a bit of a pain, but it holds out a lot longer than the iPhone itself.

The Watch also doesn't completely die when it gets to zero percent. It enters a power saving mode where it can only tell the time and this lasts ages. So you won't be stuck with a useless black rectangle on your arm. 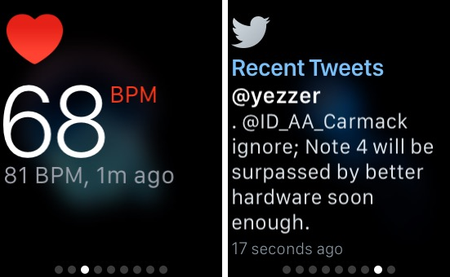 Glances - the little scraps of information that you can pull up from the watch face screen - have become the most important thing on the Watch for me.

I can check my activity goals, my next calendar event, control the audio on my phone, and perform a few other useful tasks in an instance. I almost feel like these are more useful than… 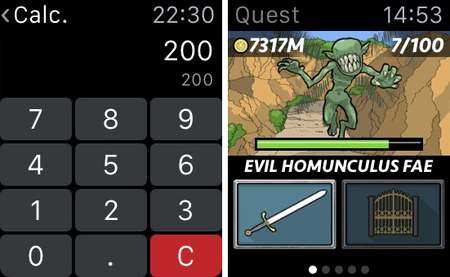 Yes, apps. I've only been using it for a while, but I feel like apps are often a step too far for the Watch. Once I start reading my Twitter timeline on a tiny screen, or try and poke at a tiny game, I just realise how silly it feels and pull out my phone.

The simpler the better is the mantra here. Apps that take longer to use than about four seconds just feel wrong. They're going to mince your battery life, your arm's gonna ache, and you're going to look silly.

There's a reason why Apple didn't put a calculator app on the Apple Watch. 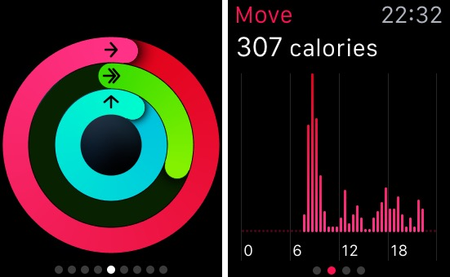 Fitness is one of the key marketing points of the Watch. I'm not much of a fitness freak but I like to stay healthy and the Apple Watch has really helped thanks to the 'Activity' app.

First of all, it simplifies everything to a really simple system: you have to move, exercise, and stand a certain amount each day to fill three rings. You can check them from a glance, and they're automatically logged on an iPhone app.

It makes it so easy to see how much or little you move each day, and encourages you to complete your daily goals. I already see that I stand and move enough, but I don't exercise at all. I'm going to change that. Thanks, expensive gadget!

Next up, maybe I'll try using the proper fitness app to go for a run. Maybe.

The Apple Watch is a nice extra for your iPhone if you can afford it. But it works best when you're hardly using it.

Try to read your email or deal with loads of notifications or play a game on it and you'll get annoyed at its tiny screen and low power and its constant demands on your attention.

But when you use it to separate out the most important alerts. And just use it to get small glances of information, it works pretty well. I can definitely see myself wearing it every day, even if I only use it a few times a day.