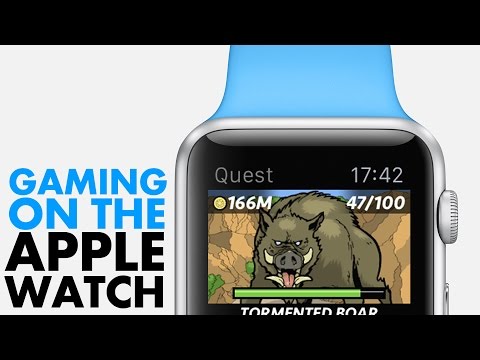 The Apple Watch is good at a lot of things. It's a good watch. It's a nice fitness tracker. It's good at dealing with notifications. But playing video games? Now that's a very different subject.

A number of games are available for the Apple Watch, and we've played most of them. Here, then, are our first impressions of gaming on your wrist - and a look at what trends are starting to emerge. 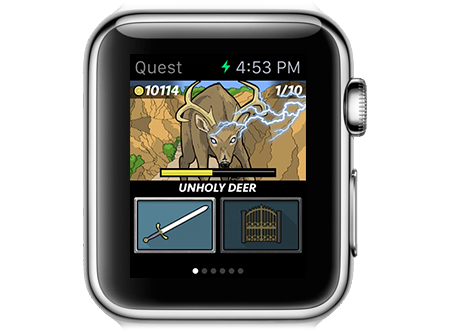 This stripped-back RPG can be played without ever opening its accompanying iPhone app. You can go through dungeons and upgrade your hero, all from the Watch itself.

The game is staggeringly simple. More Cookie Clicker than fantasy dungeon-crawler. You'll come across monsters and tap on a button to do damage for a few seconds. Then tap again. And again. And again.

Each win earns you money which can be spent on runes. One lets you attack enemies automatically, meaning the game will play itself even when you lower your arm and go about your day.

So it's not going to win any points for depth, then. But there's something quite addictive about seeing numbers go up and rats go down, and looking forward to unlocking the next upgrade.

I'll keep at it. But I don't expect to pay for premium buffs in the iPhone app's store anytime soon. 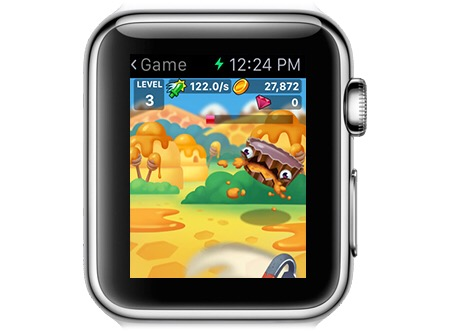 And we have our first trend! Like Runeblade above, Cupcake Dungeon is another RPG that plays itself, and encourages you to just check in once in and while to see how things are going and to spend your in-game funds.

Again, the action takes place entirely on the Watch with little menus full of swords and upgraded and stats that you can scurry through with the Digital Crown.

Points for nice artwork, but this game shows a possible issue with Apple Watch games and that's the sheer lack of space at the designer's disposal. For example, it seems like there was nowhere to squeeze your current coin total in, in the shop menu.

This one's largely the same as Runeblade (though very different in style - this is about beating up doughnuts and sentient blobs of chocolate), so we'll have to see which one holds my attention the longest. 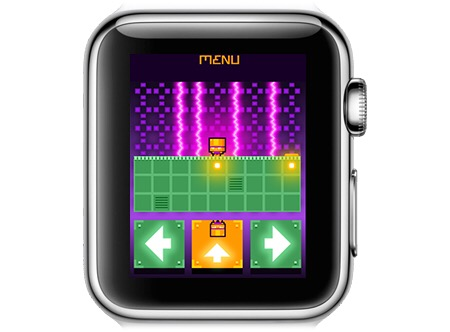 This is an abomination. It's the sort of game that people think of when they're scoffing at the idea of smartwatch gaming. "A platformer on a watch?" they say. "It will be rubbish!". And they're right.

It's got the framerate of a PowerPoint presentation, unresponsive buttons, such a small screen size that you can't see dangers before you fly straight into them, and it's really uncomfortable to play.

I'm not normally one to put a stop to progress, but maybe anyone who wants to make a traditional action game for an Apple Watch should be forced to play Gravity Mike for 16 hours. 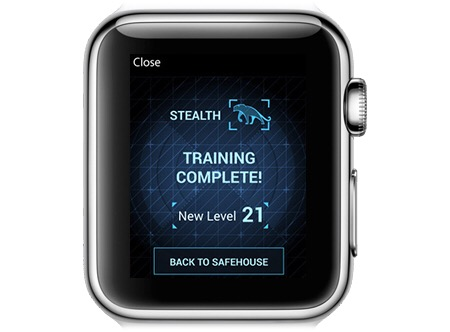 This one is more interesting, and is the first Apple Watch game that really sold me on the potential of this thing as a gaming device.

You play as the boss of a spy agency, and the handler for an agent in the field. He'll send messages to your watch asking for advice on how to overcome various obstacles and you get to write back (well, pick a response) with advice.

It's almost entirely done through notifications and plays out in real-time, so ends up feeling like you're having a conversation with this chap rather than playing a game.

This sets up an agonising moment where you might tell your agent to do something risky, and then you don't get a notification for half an hour. What's he doing? Is he okay? You build quite an intimate relationship with this guy.

Basically, it fits the watch well: it focuses on quick notifications, you play it in four second sessions, and you almost forget you're playing it until your next buzz. I like it. 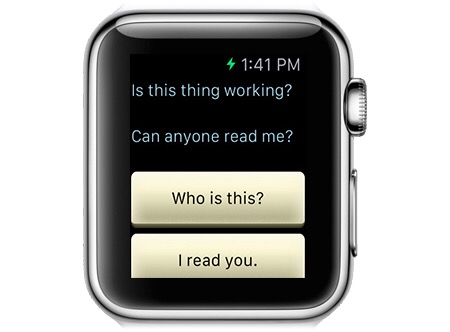 But I think I like Lifeline even more. It's got some of the same ideas - real-time responses, notification-led design, and binary choice responses. But the sci-fi setting and the potential for unexpected turns in the narrative has me intrigued.

I look forward to playing both, and seeing this grow as a viable Apple Watch genre. 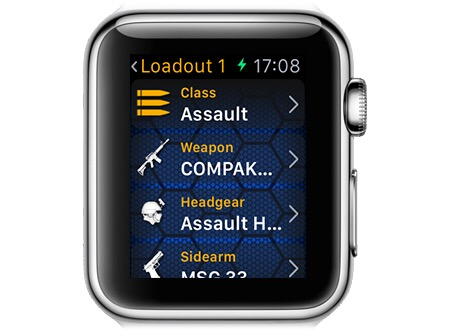 A number of EA and Gameloft games have been updated with companion apps that let you do a number of simple actions on your Watch, to communicate with the main game.

I tested Modern Combat 5 which lets you fuss about with your character's load out - picking grenades and hats and customising weapons - from your wrist.

It seems a little perfunctory. It exists because Gameloft should probably make some Apple Watch games, rather than because it would actually be a useful app. 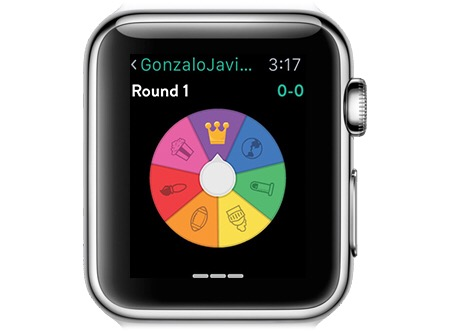 Trivia Crack is kind of well done. You need to have started a game on your iPhone, but once that's done you can pick it up from your Watch.

You'll get questions, and can see all the available answers with a scroll or a tweak of the Digital Crown. And it's all very clear and easy to read with vivid colours and great animations.

I guess if you play a lot of Trivia Crack, this is quite a fast way to play your go… on the go. 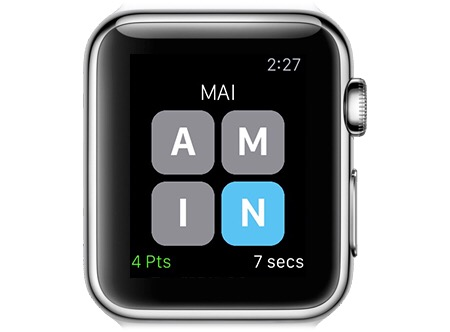 Snappy Word is basically a clone of PikPok's Four Letters. You get four letters and must make a word.

The game itself is a bit crap. It has a rubbish dictionary with words you've never heard of, and it will only accept one word even if there are multiple answers. Like most clones, it's not a patch on the original.

And it also reveals a bit of an issue with the Apple Watch: third party apps seem to have quite a lot of latency. You try and smash out four letters in quick succession and there will be a long delay.

Not a big problem in this game. It still works. But responsiveness is why the iPhone feels so good to use. It's what Apple does best. And the Apple Watch isn't so responsive, making it feel a little off. A little un-Apple. 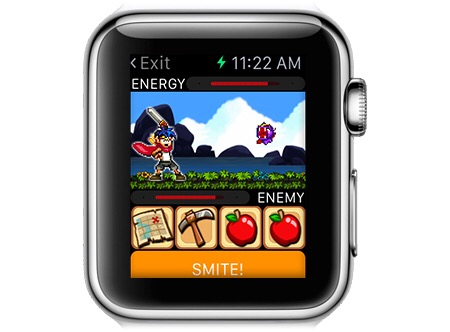 This was one of my most anticipated Apple Watch games. It's from a great developer called WayForward and has an innovative system that spills a game between both your iPhone and your Watch.

And it seems pretty smart. You send Bolo (a character from the Shantae games) off on a mission that might take 30 minutes. And you can check in every now and again to feed him an apple, open a treasure chest, or play a simple mini-game.

But it doesn't have notifications! Or, at least, I can't figure out how to turn them on. One weird thing with the Apple Watch is that you can't turn on notifications from the device - you have to accept them on the accompanying iPhone app.

So you basically forget all about the game. And then suddenly remember, load it up, and see that your hero died mid battle and you have to start again. Hm. Must try harder.

My first day playing Apple Watch games was pretty interesting. There were some disappointing experiences and some utter rubbish, but also some exciting games that give me hope for this thing as a gaming platform.

Games like Letterpad and Cupcake Dungeon offer you a quick bit of gameplay when you're bored but can't be bothered to reach for your phone. And Lifeline and Spy_Watch feel more intimate on the Watch, and play to the device's strengths.

Developers are still figuring stuff out, too. Some games won't work until you do stuff on the iPhone whereas others are self sufficient. Notifications are weird. And the Watch crashed and totally stuffed up all my half-installed apps.

I'm not going to call this an essential gaming platform yet. Not by a bloody large margin. But we'll keep playing and keep looking for interesting stuff. That is our job, after all.

How to take a screenshot on the Apple Watch