[Update] Pretend to break someone's back in WWE 2K, out now on iOS and Android

The App Store has finally got a proper wrassling game. Not some card-collecting nonsense or some super-powered bull hockey. We're talking proper WWE-style choke-slamming, clothes-lining, and pile-driving.

WWE 2K - out now on iOS for £5.99 / $7.99 - lets you create your own wrestler and take them on their TV journey as they earn respect, win titles, and upgrade their skills.

Of course, you can also play as WWE celebs like John Cena and Brock Lesnar. But why would you want to do that when you could play as a ginger Hitler with a beer belly and a neon pink singlet? 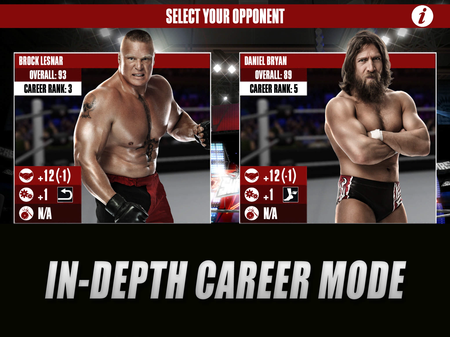 The game's also got online multiplayer, a full training mode, and unlockable items to further kit out your custom-made superstar.

The game is available right now on iOS, and requires an iPad 3, iPad Mini 2, iPhone 5 or better, and it's not compatible with iPod touch. An Android version is set to follow along shortly.

WWE 2K announced, will be the first console-like wrestling sim for iOS and Android