When you're at a show, people often ask "what's the best thing you've seen this week?" My default answer at GDC 2015 has been Submerged.

It comes from Uppercut Games, of Epoch fame, but this is a long ways off from robots shooting the nuts and bolts off each other in dingy urban areas. This game is lush, quiet, and completely combat free.

You play as a young girl who needs to help her brother, who has got a nasty great gash right across his belly. She'll have to venture out into the world to find, reach, and retrieve a handful of medical supplies.

That world is one that has been half drowned by a rising sea level, so dolphins and whales swim through city streets and skyscrapers jut out of the ocean. It's your job to ride a boat through the water and then get out to clamber up these towers. 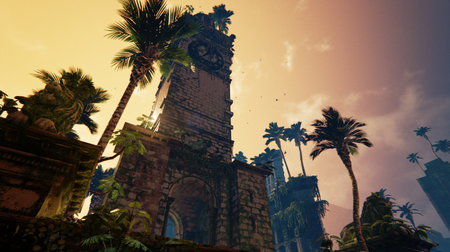 It's not exactly Tomb Raider - there's no death, and the platforming isn't too tricky. It's more about navigating the maze-like mess of handholds, vines, and drainpipes as you look to reach the tallest point of the building.

And when you're up there, you might want to whip out your telescope to see if you can spot other beacons on nearby rooftops. The game's openworld and nonlinear, so it's really up to you to seek out the health packs in whatever order suits you.

You don't always get health. Sometimes you'll climb up to unlock new cave painting-like panels that fill in the backstory of the city, or get upgrades for your boat. 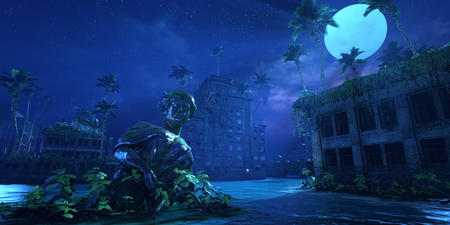 There seems to be even more to it than this. In my demo, I saw a glimpse of some enigmatic men, with gross white skin and covered in warts. Who knows what role they play, but Uppercut assures me that there's no fighting here.

How it plays on mobile is the next question - I played it on a PC. But the studio is testing different control schemes, and different graphics options, to get it working on touchscreens.

So that's Submerged - a mix of Shadow of the Colossus, Mirror's Edge, and Journey. Quite the combination, I think you'll agree. It's coming to mobile - and most console platforms - in the coming months.