Crashlands is perhaps the most ambitious game that Butterscotch Shenanigans - of Quadropus Rampage and Flop Rocket fame - has made yet.

It's a massive open-world survival game - in the same vein as games like Terraria and Minecraft - but designed with touchscreens in mind.

There are lots of little tweaks to make this complex genre work on your phone. Like smart item switching, so if you tap on a tree you'll automatically equip an axe, but tap on some seeds and you'll switch to a hoe.

Or the ability to quickly paint out wooden floor panels for your impromptu base of operations or farmlands for your new agricultural empire just by dragging your finger around the screen.

And it's not just controls. You can choose to track your progress towards a specific recipe with an on-screen display, mostly so you know what you're doing when you come back for your next five minute mobile-friendly session. 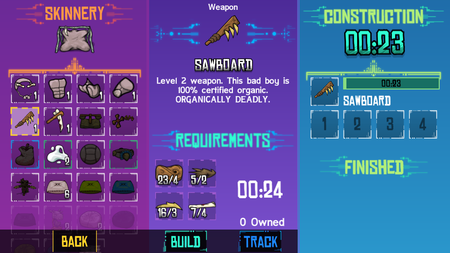 Your overarching goal in the game is to find juice, to re-juicify the earth. And that involves setting up a base, wailing on enemies, crafting new equipment and weapons, and generally becoming more of a badass so you can tackle new areas.

Combat is pretty simple. You just tap on enemies to start attacking, and then you'll want to dodge to stay alive. Enemies show you where they're about to hit, to give you a chance to evade the attack.

And you'll fight some truly bizarre enemies, including a hippo-like monster with one giant foot and a belching red jellyfish that barf out an artillery strike. Luckily, you can turn these foes into pets who help you in battle. 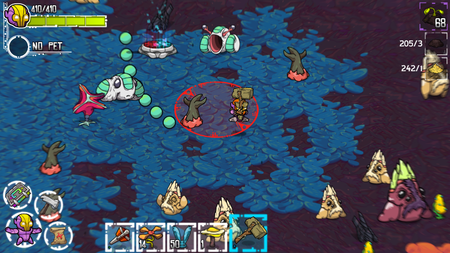 Crashlands is just packed with content, and is utterly massive to boot. Early play-testers found themselves taking 15 hours or more just to leave the first biome. So there should be plenty to keep you occupied when this hits iOS and Android in the summer.