New pricing details about Nintendo's next free to play game, the upcoming match-three puzzler Pokemon Shuffle, shows that the firm is taking inspiration from mobile games like Candy Crush Saga.

On the game's Japanese site - as translated by NeoGAF member JoeM86 - it seems like the game will have an energy system with five hearts that get depleted each time you play a stage: whether you win or lose.

Hearts take time to recover, and "some imagery appears to show it taking 30 minutes," says JoeM86.

You can refill your hearts immediately by using gems, which you can get through StreetPass hits, or you can purchased with real dosh. One Gem, which refills one heart, costs 100 Yen (which is about 55p / 85c). 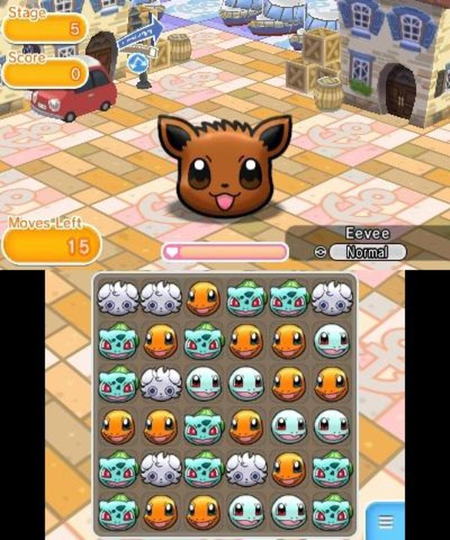 Gems can also be used to buy coins, which let you buy power-ups and boosters to make stages easier. You could buy a Great Ball, for example, which makes it easier to capture Pokemon.

This won't be a shocking read for anyone who's played an iOS game in the last few years, but it might come as a shock to Nintendo fans who have so far only dealt with premium games, free to try experiences like IronFall Invasion, or F2P games where you can haggle down the costs like Rusty's Real Deal Baseball.

Especially as Nintendo boss Satoru Iwata has said, in the past, that free to play "destroys the value of the game software", and said "we can do better. We can do more. But that’s not something Nintendo is interested in," when asked if Nintendo would go down this path.

Pokemon Shuffle is out this Wednesday in Japan. The 3DS game has been announced for the US and Europe, but no release date has been given yet.