Tied up in knots

After not coming out in December 2014 (as was the original plan), iPad puzzler Super Looper will be tying us in knots on January 4th 2015.

It's a tricky puzzler about recreating mystic Celtic knots. You're given a tiled grid full of knot pieces that you slide and rotate to create a specific knot across its 100 levels.

But, after having spent a few minutes with it, it's clear that this is much easier said than done.

You're hit with a variety of challenges, ranging from speed puzzles with a timer, competing against thieving birds, and dealing with tile-swapping magnets.

The standard level is one that gives you a limited number of moves to work with. It's simple enough at first, but threatens to be tough later on as you're introduced to a trick early on in the game that lets you exploit the rules.

Basically, you can slide and rotate pieces that make up a smaller knot in the grid without it costing you a move. So, making other knots in order to move pieces around the grid at a minimum cost is certainly an advanced technique.

"The challenge is at first learning the patterns and then seeing those patterns," says developer Chickenfeet Studios. 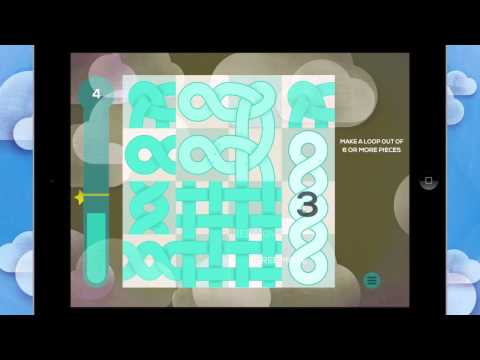 However, none of this is to imply that Super Looper is not accessible or enjoyable at a more basic level.

The game's presentation takes care of that. Celebratory, delightful tunes and fireworks kick in each time you complete a puzzle.

It makes sure you feel good for completing the simplest of puzzles.

You'll be able to download Super Looper for free on January 4th for iPad. It has a single 69p / 99c IAP used for unlocking levels 31 to 100.

January PS Plus games on Vita include The Swapper, Woah Dave, and Duke Nukem