While the iPad and its Android-based rivals have swallowed up much of the global tablet audience, Microsoft is dutifully snapping at the fringes of the market in the hope that it can catch a break and score some share.

Part of its plan is lowering licensing costs so that OEMs can create super-cheap slates complete with Windows 8.1, as well as a year's subscription to Microsoft's desirable Office 365 package - which usually costs around £60 on its own. As a result, we've seen some low-cost Windows tablets arrive during 2014, one of the cheapest being the Linx 7.

It's a 7-inch slate with an Intel Baytrail quad-core chipset, 1GB of RAM and 32GB of storage which is capable of acting like a tablet and a desktop - the latter of which should make it of particular interest to fans of classic PC games, but more on that in a minute. 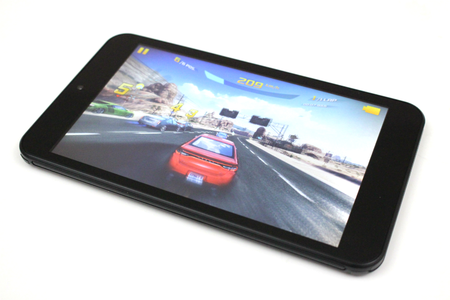 The Linx 7 doesn't have any physical buttons on its front, but the top and right-hand edges (when held in portrait orientation) certainly do. On the side you'll find the volume and power buttons, while the top is home to the Windows button, 3.5mm headphone socket, mini-HDMI socket, MicroSD card slot and Micro USB port.

The most obvious area where Linx has kept the cost down is the tablet's build quality. The Linx 7 is solid enough and doesn't feel like it's going to fall to pieces at a moment's notice, but the all-plastic casing doesn't exactly radiate a premium impression. Thankfully the 800x1280 IPS screen is altogether more agreeable, offering decent brightness, excellent colour balance and solid viewing angles.

Around the back there's a 2-megapixel camera which - as you might expect - isn't really worth bothering with.

The camera's lens is surrounded by plastic covered in a faux-metallic coating, and we found that the simple act of placing the device down on a flat surface was enough to gradually chip this coating away. Within a few days the coating was all but gone, leaving a rather scruffy-looking camera lens.

The front-facing camera is also 2 megapixels, and is decent enough for video calls and the like. For sound, there's a mono speaker on the bottom edge.

Because it's running Windows 8.1, the Linx 7 isn't just a tablet - the full Windows desktop is literally a button press away. Windows 8.1's standard "Metro" interface is ideal for touchsceens but the traditional desktop environment isn't quite as suitable - especially on a device with a 7-inch screen.

Thankfully you can pair a Bluetooth mouse and keyboard and link to a monitor or TV using the HDMI-out port, essentially turning this into a "full" PC. Just like a proper computer, it's possible to plug in USB peripherals too, and Linx has even included a Micro USB to USB adapter in the box for this very task. 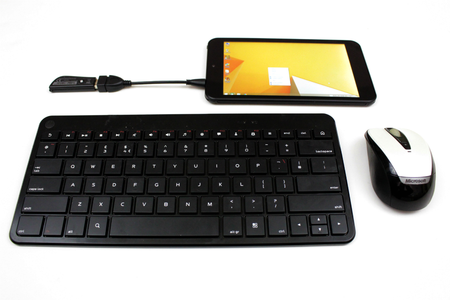 The specs might not instill a sense of confidence in the Linx 7 but we found that in terms of everyday performance, this device actually surpassed our meagre expectations. General activities - such as navigating the interface, moving between apps, viewing movies and browsing the web - are all surprisingly fast, and in many cases the Linx handled embedded video playback better than our Samsung Chromebook and Nexus 7 tablet.

The Linx 7 has access to the Windows Store where you can download apps and games. Again, the humble tech which resides within the tablet's thin frame took us by surprise. Games like Asphalt 8: Airborne and Halo: Spartan Assault run very well indeed, and while the Windows Store lacks some of the more popular downloads present on the rival App Store and Google Play markets, there's still more than enough on offer to keep you occupied.

However, it's the Linx 7's PC background which will arguably of most interest to seasoned players; because it's running a full version of Microsoft's famous OS, it means you can install all manner of PC-based applications - including Steam, DOSbox and ScummVM.

While the processor isn't going to be up to playing the latest PC games, it's more than capable of running classic titles from yesteryear; for example, using ScummVM we were able to resurrect point and click classics like The Secret of Monkey Island, Lands of Lore and Full Throttle, while Exult allowed us to play Ultima VII - one of the finest PC role-playing titles of the '90s. 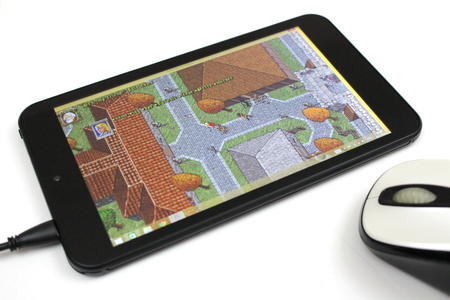 Getting Office 365 for a year - worth £60 on its own - makes the Linx 7 a very attractive proposition. Office 365 comes with free OneDrive Professional cloud storage and Skype-to-phone calls to further sweeten the deal, and it covers you for a PC licence too - so you could technically install it on your home computer at the same time. If you're already looking to buy the package in the first place then you're effectively getting a tablet for £20.

Even if you have no interest in Office-related activities, the Linx 7 makes a very appealing purchase if you've not been swayed by the likes of the iPad or Android. It's deceptively powerful consider the weak specs and low cost, and makes for an ideal PC retro gaming system.

32GB of storage is pretty impressive too - that's twice the memory that many Android tablets ship with that cost much more than this. Even when taking into account the large footprint of the Windows 8.1 install, there's still over 20GB of space available and the ability to add in more storage with cheap MicroSD cards is even better, and because it's based on Windows, you can link up USB hard drives or thumb drives without any fuss at all. 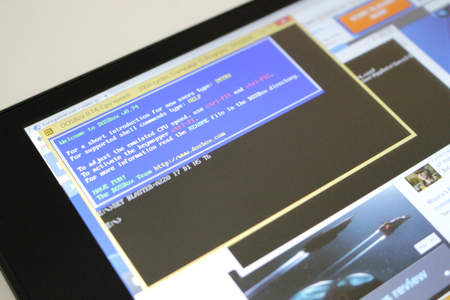 Linx quote around five hours of battery life, which isn't spectacular. We found that between four and five hours is a more realistic estimation, and that means you could have to charge the Linx 7 twice a day if you plan on using it heavily.

We also have to take issue with the placement of the Windows button, which is awkward to press on the top edge of the device. We often entirely forgot about it and instead used a swipe gesture to bring up the on-screen Windows button. It's a pretty essential key - akin to the Home button on the iPad - and simply doesn't belong on the top of the tablet, out of easy reach.

Although Linx has included a Micro USB to USB lead in the box, it would have been more convenient to have a standard USB socket on the tablet itself, especially if you're looking to use the Windows desktop and link up various peripherals and drives. 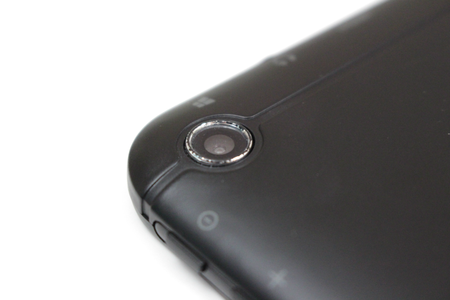 The Linx 7 is a remarkable piece of technology, regardless of its shortcomings. Battery life could be better and it doesn't feel like a premium product, but the fact that it offers a tablet and desktop experience - as well as Office 365 for a year and all of the benefits that Windows 8.1 provides - makes it an absolute steal for just under £80.

There's also an 8-inch variant available which has the same basic internals, but we actually preferred the more compact nature of the Linx 7; it's a pint-sized marvel which offers a lot of bang for your buck, and is the perfect mobile companion for PC retro gamers and those who want to enjoy the less demanding titles available on services like Steam. Better-than-expected performance for Windows Store titles is another neat bonus that makes this a highly recommended purchase.

Thanks to Ebuyer for supplying the unit used in this review.

Small, powerful and packed with features, the Linx 7 is one of the most surprising tablets we've seen all year, offering a full desktop experience for less than £80
By Damien McFerran
| Jan 3, 2015 |
Windows 8
Find out more about Linx 7

CES 2015: Nvidia's Tegra X1 is the first mobile chip to provide a teraflop of power

Game Connection 2015: Hands-on with The Antiques Affair, the only game here about gluing broken teapots