If 2014 was the year when mobile mechanics started working their way into Triple A console titles, then Destiny is the prime example of that trend.

It doesn't have microtransactions, it doesn't have base building, and it doesn't task you with matching triplets of gems, but it is by far the most mobile non-mobile title I've ever seen, and I'm going to tell you why. 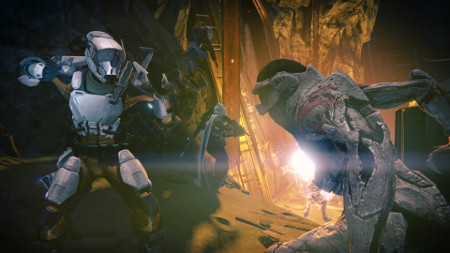 For those of you that don't know, Destiny is Bungie's ridiculously expensive-to-make mash up of an FPS and an MMO. It's a flawed, overblown, decidedly silly game with some of the most rewarding shooting this side of the original Halo games.

It's the reason I bought a PS4, and the game that I've put the most time into this year. Almost every day since I bought it I've sat down and played through a couple of missions, or jumped on with friends to take on a Strike or a Raid.

To all intents and purposes, this is a bus stop game you play on your sofa. You nip on, spend an hour shooting some squelchy aliens, increase a stat here or there, and then slope off to do something else. 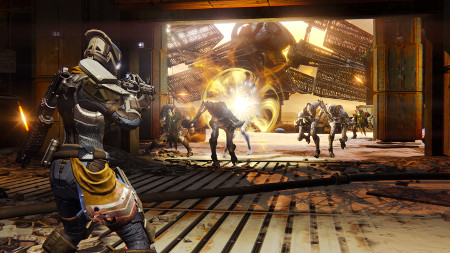 The core of the gameplay is that moreish dance towards the level cap. It's all about numbers, maxing out your equipment with constantly repeated skirmishes so you can make everything that little bit shinier.

The story is secondary, which is good because it barely exists. It's snippets of garbled dialogue that move you from one area to the next. If the cut scenes were skippable I'd have skipped them a thousand times over by now.

And that's what the best mobile games do. Your progress isn't measured in chapters completed or secrets uncovered, it's marked by incremental change. The bombast on show in Destiny might be above and beyond anything on mobile, but its rhythm of grind for a little leap forward is instantly familiar.

While the mid-core genre might be light years away from Destiny's shooting, jumping, and skidding, it follows a similar pattern when it comes to doling out rewards. You need to hop on daily, poke a few things, complete a few missions, and work towards your next goal. 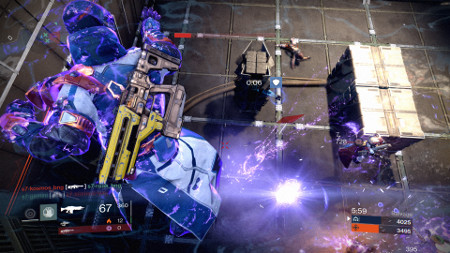 And that's exactly the same in Destiny. There are even caps on the number of Vanguard and Crucible Marks - two of the currencies you need to buy better equipment - you can earn on a weekly basis. It's funnelling you into playing in breaks, in stops and starts.

It's a game that's designed to bring you back at regular intervals. There are daily quests to complete, weekly challenges to have a crack at, and vendors who only appear at set times during the week.

If you miss a couple of days of Destiny you feel like you've missed out. Not on anything substantial, but on a few marks, a few engrams, on taking a few steps closer towards your goal.

Oh, yeah, there's the engrams too. Random pieces of loot that could be something incredibly rare and useful, but are more often than not useless lumps of underpowered equipment that you dismantle straight away. That sounds like something taken straight from a card-battler to me. 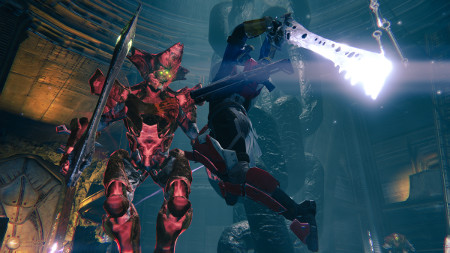 Everything is a little mission. Everything is a counter ticking ever upwards. And while the progress is slow, is pitched to keep you coming back time and time again,

Destiny is a game about watching numbers tick ever upwards. Its external action, its shooting and adventuring, might come straight from the annals of blockbusting console game history, but its rhythm, the beat of its heart, is about as mobile as they come.