Opinion: The worst thing about Apple's censorship is the inconsistency (NSFW)

It's a grim, reflective game about being a border agent in some fictional Eastern bloc nation. You've got to check everyone's papers are in order, while dealing with a spiralling mountain of red tape and your family's dwindling wellbeing.

Unfortunately, it didn't make it to the App Store unscathed. For its latest prudish decision, Apple decided that it wouldn't sell the game on its shop shelves unless developer Lucas Pope removed the game's nudity.

Now this isn't anything pornographic. Basically, you are sometimes forced to put people in a full body scanner to see if they're hiding contraband under their clothes. The scanner cuts through their clothes, revealing their lumpy naked bodies.

On the PC, this was optional and you could flick a switch to hide the naughty bits with digital pants and bras. But on the iPad version, Apple's making that decision for you.

What you won't see on an iPad

Much has been said about Apple's bonkers decisions on anything remotely controversial in video games. About how satirical immigration game Smuggle Truck was forced to become silly stuffed animal game Snuggle Truck.

Or how Hot Mess almost got the boot for showing a barely dressed couple kissing. Or how Endgame: Syria came to investigate the war in "Eurasia". Or how games that parody sweatshops, phone manufacturing factories, or - best of all - app store rejection teams are simply not allowed.

There's also the weird inconsistency that you can buy a film on iTunes with a sex scene or a book about sweatshops and it's fine. Apple itself admits that it sees video games differently, stating that if app makers "want to describe sex, write a book or a song."

But there's another inconsistency - other games on the App Store. The rules at Apple aren't as strict as you may think, and different guidelines seem to apply to different developers.

Because, nudity is banned right? Naughty bits are naughty? Well, check out episode two of The Wolf Among Us, where you get an eyeful of a pole dancer's breasts. No censoring, no black bar, no pixellation, no blurring, and no rejection.

How is that fair? 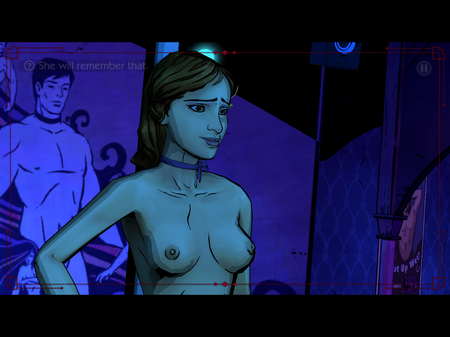 Also, take the countless games that have been banned or pulled from iTunes for simulating the drug trade process, like Go Kane! and Dope Wars.

One game beat the ban by rebranding as Underworld: Sugar Wars, replacing meth and weed with soda and sweets.

But in Grand Theft Auto: Chinatown Wars, there's a whole drug-trading meta game where you can earn money by buying and selling heroin, acid, coke, weed, ecstasy, and downers. It flies in the face of every drug-based ban Apple's ever handed out. 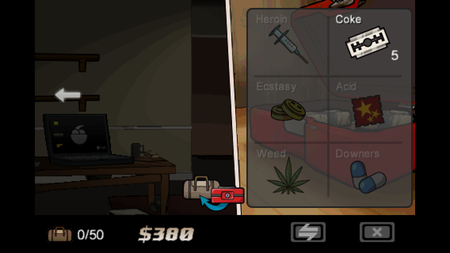 It's one thing to reject games that tackle controversial and uncomfortable themes. That's going to dampen the creativity shown on the App Store, and turn away developers who are doing the most bold and audacious work.

I don't agree with it, of course. I believe that games should have the same rights as movies and books. In fact, by letting you play an active role in these systems, video games can sometimes be more powerful than passive art forms. I've never felt guilt while watching a movie, but lying to Clementine in The Walking Dead made me feel awful.

But if Apple wants to do that, so be it. The App Store is a private retail outlet and, like Kmart and Target pulling Grand Theft Auto V from its shelves, Apple has every right to refuse games. But it has to be consistent with its own rules, or it will start to push away developers.

Did Telltale and Rockstar get free passes because they're huge developers that Apple doesn't want to reject? And what message is that passing on to smaller, indie developers who want to share the same store shelves? It's unfair.

Like in Papers, Please, you've got to be very careful before you drop that big red "REJECT" stamp, or you risk turning away and scaring off some of the most interesting games and thoughtful developers.

Tales from the Borderlands - Zer0 Sum

Papers, Please has made a speedy return to the App Store [Update]