Nitropia: War Commanders offers a lot of bang for a small amount of buck [Sponsored]

iOS is absolutely crammed with free-to-play RTSs such as Clash of Clans, Boom Beach, and Game of War – Fire Age. So just how do you stand out in a crowd of fine competitors such as these?

We spoke to Studio Head, Prithvi Virasinghe about the new title and how he believes that the plot, monetisation scheme, and future update plans will help them shake off the competition.

Pocket Gamer: What do you think Nitropia: War Commanders offers that you can’t get from any other title on the App Store?

Prithvi Virasinghe: I'd say value for money and a fresh game play experience. Though the initial download and the first few levels are free, Nitropia is a premium game. There is a one-off purchase of $1.99 that guarantees you all of the levels that the game has to offer - which even extends to the DLC pack that is coming in January.

There are in-app purchases - such as extra characters - but they can also be earned via the in-game currency, Nitrus. Every mission rewards you with a lot of Nitrus for completing achievements. I want the players to feel like they're getting real value for their money with that one-off purchase.

The real difference between Nitropia and similar mobile Tower Defence games but we are bringing more real time gameplay elements into the mix. You can freely move your units at any time and enemies will be building towers and attacking yours. There's a lot of strategic depth but none of the intense micro-management required from a similar PC title. We worked hard on the controls to make it easy to give commands and move troops around keeping in mind the end platform was mobile and tablet devices

We also added a lot of cool extras like a deep story line, fun characters and unique special abilities you can mix and match to combat the diverse enemy line up. 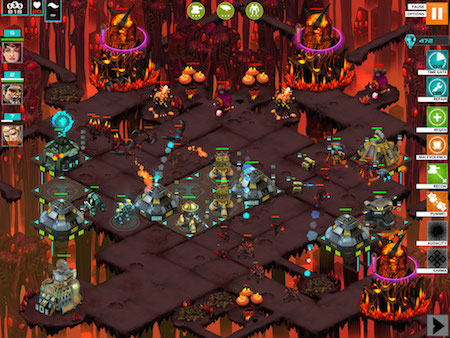 We went through a normal development curve of constant iterations. The style began as top down and cartoony but ended up being isometric and sci-fi. The interface was revised three times after game play testing and all of the game modes received lots of minor tweaks throughout the process.

It has taken us nearly a year to develop since first prototype, which we designed as part of a pitch. It was quickly put together using basic artwork - which actually looked quite cute - but it was vastly different to what we have now.

The biggest challenge has been getting people to take notice of the game. One of the biggest problems with being an independent studio is that you're competing with loads of free-to-play titles that dominate the market place. It's for that reason that we went for the freemium model. We want people to play to discover this really cool strategy game but getting it in their hands is a massive challenge. 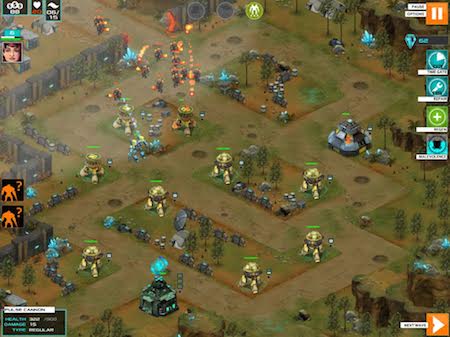 [Above: Here are the same two levels, before and after]


Which part of the game are you personally the most proud of and why?

The game is really fun and its mechanics are sound so I'm happy with that. The thing I love the most are the story and characters. We spent a lot of time getting them right, working closely with a few writer friends to ensure the dialog is snappy and that the characters have personalities that you can relate to.

The update we're working on at the moment puts the plot much more in focus. Our initial thought was to keep the cut scenes optional but we found that a few people missed them despite wanting to know more about the narrative. I really want people to take notice of the story because it lays the foundation for the sequel and the third faction.

Also, I hope people discover the multiple mix and match strategies created by customizing your team’s special abilities. Because any CO can operate any Mech (called Rigs) you can combine each of their unique special abilities to create custom combos. When you play using 3 CO/Rig teams in some of the missions, the diversity of options really comes out. 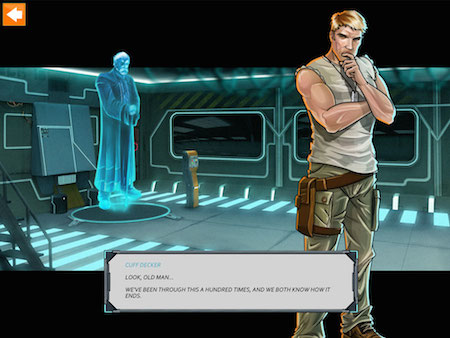 Yes! We are planning a free DLC update in January that adds three more levels, two new characters and, most importantly, a taste of where the plot will head in the future.

We're slowly going to start introducing the third faction which are inspired by mecha and cybernetics. You'll get access to one such character in this DLC and in later updates you'll get the chance to see their towers, units, and unique attacks as well. Our plan is to lead up to a sequel where you can witness the story from each of the different sides.

Have you any plans to bring the game to any other mobile platforms?

Amazon Kindle will be next and then Windows Phone and the web to follow. We'd like to do a version for Steam with an updated particle and animation system to take advantage of that extra processing power.

Pixel Boat Rush hurriedly rides the waves on to Android, blasting the competition along the way